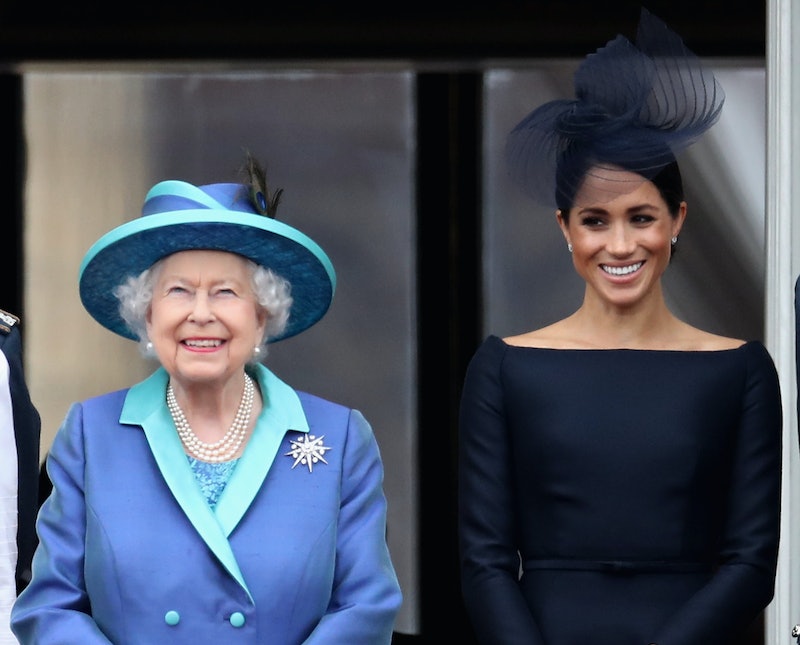 Meghan Markle's relationship with the Queen just got that much more special, thanks to an amazing birthday connection. As People reported, Meghan Markle shares a birthday with the late Queen Mother, Elizabeth Bowes-Lyon, who was the mother of the current Queen Elizabeth. So, Aug. 4, the birthdate that they both share, will be a very special day for the entire royal family.

Markle will turn 37 years old on Aug. 4, a date that will mark her first birthday celebration as an official member of the British Royal Family. As previously stated, it's also the birthdate of the Queen Mother, who was born on Aug. 4, 1900, per People. She passed away in 2002 at the age of 101, but her memory has, of course, lived on in the hearts of her surviving family members. In 2012, on the 10th anniversary of her death (and the passing of Princess Margaret, who died six weeks before her mother in 2002), many of the royals, including Prince Harry, celebrated their late family members' lives during a special service at St. George's Chapel, according to Hello! Magazine.

In 2017, the family honored the late Queen Mother with a sweet tribute on social media. In their message, which was posted via Instagram, they shared quite a few fascinating facts about the royal. Bowes-Lyon was the first British-born Consort since Tudor times (paving the way for future Consorts, the British-born Duchess of Cornwall and the Duchess of Cambridge). She was also the first member of the Royal Family to reach 100 years of age. The Queen Mother was certainly a very special woman. And it's only fitting that Markle, who's obviously special in her own right, has such a lovely connection to someone near and dear to Queen Elizabeth.

This connection is especially sweet considering that the Duchess of Sussex has already seemingly formed a close bond with the monarch. After all, you don't travel to Chester via royal train if you're not close. As you might recall, the two did just that in June. According to the Chester Chronicle, Markle and Elizabeth visited Chester Town Hall and attended the opening of the Mersey Gateway Bridge during their engagement on June 14. Their outing together was a huge sign that not only is the Duchess adjusting quite well to her new royal duties, but she's also been warmly accepted into the crew by the head of the Commonwealth herself.

Seeing as though there's a special connection to her birthdate, does the Duchess of Sussex have something just as fun planned for her day? Well, she does have one event planned for Aug. 4 and it does sound super lovely. As People noted, Markle and Harry will attend the wedding of his best friend, Charlie Van Straubenzee, on that date. During the occasion, the Duke of Sussex will even take over some best man duties. So, it does seem like there will be some fun times in store for the Duchess' 37th.

Markle's birthday was already bound to be an exciting affair, simply because of her newfound status as a member of the royal family. And now, considering the shared birthday, the date will also be doubly special for the everyone, and for Queen Elizabeth especially.