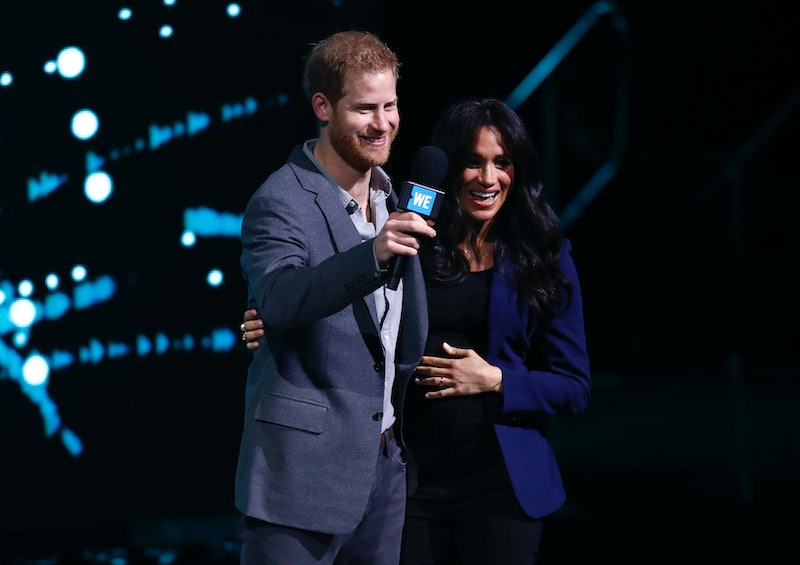 Meghan Markle's messy bun is her signature beauty look, but the Duchess of Sussex may have a signature sartorial choice as well. You may not have noticed, but Meghan Markle's blazer and jeans combination appears to be her go-to look, and it's honestly a great one.

On March 6, Prince Harry spoke at WE Day, an event that honors young people who are having a positive impact on their communities. After giving a speech at the event, the Duke of Sussex brought Markle on stage. The Duchess was dressed down compared to her metallic brocade dress she wore the day before. In a not-so-surprising fashion turn, she was rocking a blazer and pair of jeans while at WE Day.

According to Harper's Bazaar, Markle wore a Smythe blazer, black skinny jeans, and Manolo Blahnik pumps. While that ensemble may not seem newsworthy given its casual vibes and high price tags that mere commoners can't afford, the outfit solidified a pattern that Markle appears to have, rocking a blazer and jeans.

Regardless of whether it's her maternity style or her looks pre-pregnancy, Markle has an established pattern of wearing the two pieces together. Her appearance at WE Day is just one of the many times she's rocked the look.

In fact, it turns out that the look Markle wore to WE Day is almost identical to one she wore in Morocco only a few days earlier. Elle UK gathered all of Markle's ensembles from her trip, and during her second day, the Duchess wore a slightly oversized Alice + Olivia blazer, black skinny jeans, and a black top underneath. The only difference? While in Morocco, however, she paired the look with her Birdies flats.

Simply because Markle wore similar navy blazers, that doesn't mean they're the only ones she rocks. The Duchess of Sussex seems to have a plethora of choices jean and blazers choices to pair together. Perhaps her most well-known blazer and denim combo, however, is one she wore while in Australia.

During Markle and Prince Harry's trip to the country in Oct. 2018, the Duchess wore a classic grey, plaid striped blazer that wasn't just stylish (but it really did look SO good). The piece just so happened to be from her BFF Serena Williams' clothing line. The Serena Williams Boss Blazer quickly sold out after Markle wore it, and her decision to wear it was a totally sweet gesture between the friends. In fact, Williams later went on to tweet her support of Markle's work with Hub Community Kitchen.

While Markle's Serena Williams blazer seems to be her most recognizable, it's far from her only one. In fact, it wouldn't be surprising if she's got an entire closet dedicated to them and their coordinating jeans. Even after wearing the Williams blazer while in Australia, she put more on display.

Markle rocked a gorgeous white pin-striped blazer that was just a bit oversized. Like usual, she paired it with a pair of black skinny jeans and pumps.

Then, there was the more sleek, fitted style she wore while at an Invictus Games event.

Don't think that Markle's love of blazers has a limit, either. She's also paired many with a fabulous dress like she did while in Morocco.

If you want to embrace your inner Meghan Markle but just can't seem to perfect your messy bun, don't worry. She's basically got the sartorial equivalent in her classic blazer and jeans combination.