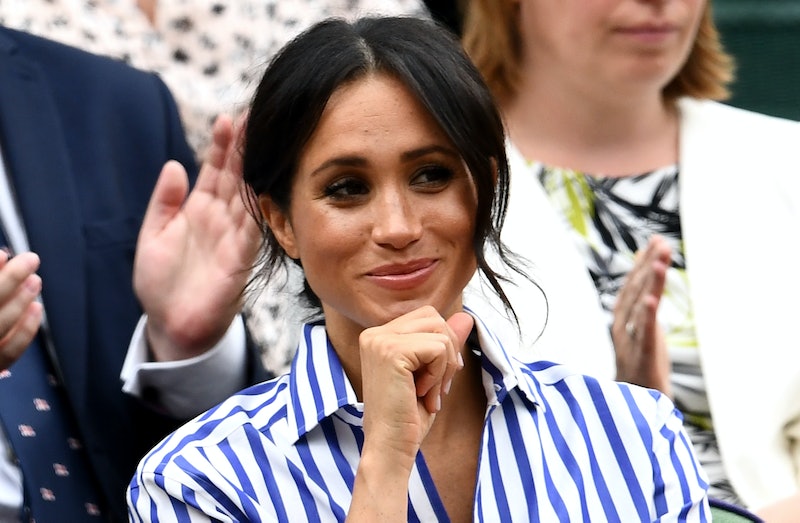 American Princess Meghan Markle has something more than a tiara to celebrate. The 37-year-old former Suits actress and new bride to Prince Harry adopted her beagle, Guy, in 2015, and now the royal dog is "writing" a book about his life as a pampered pup. His Royal Dogness, Guy the Beagle: The Rebarkable True Story of Meghan Markle’s Rescue Dog will cover Guy's life, from his humble beginnings as a shelter resident in Kentucky to being the newest resident of Kensington Palace. The book will hit stores on Nov. 20.

It seems like the book is not officially sanctioned by Meghan Markle, Guy the Beagle, or the Royal Family. And obviously, Guy the Beagle did not actually write this picture book. (But a girl can dream, right?) The book was written by Mike Brumm (The Late Show with Stephen Colbert) and Camille March, and E.G. Keller created the artwork for His Royal Dogness, Guy the Beagle. Keller is best known for his work on A Day in the Life of Marlon Bundo, in which the titular Second Rabbit of the United States told all about his life as a gay bunny in an administration hostile to LGBTQIAP+ individuals and their families. A Day in the Life of Marlon Bundo outsold the other, more official book about the bunny, Marlon Bundo's Day in the Life of the Vice President written by Charlotte Pence, the daughter of Vice President Mike Pence. Even though Guy the Beagle's book isn't parodying any other works, we can all hope that this published writer-dog sees sales worth wagging his tail over.

Guy the Beagle is not the only dog in the British Royal Family, nor is he the only one to have a book published about him. Earlier this year, the last of Queen Elizabeth II's corgis, Willow, died at the age of 14, leaving the monarch with her two "dorgis" — mixed breeds produced by the mating of Princess Margaret's dachshund, Pippin, with one of the queen's corgis — Vulcan and Candy. Willow and another of the royal corgis, Holly, appeared in Julia Donaldson's 2017 picture book, What the Ladybird Heard on Holiday. The Duke and Duchess of Cambridge also own a dog, Lupo, whom author Aby King imagines as an adventurous mystery-solver in her series of chapter books, The Adventures of Lupo. Another book about Guy the Beagle, Nancy Furstinger's The Duchess and Guy: A Rescue-to-Royalty Puppy Love Story, will be available in January 2019.

His Royal Dogness, Guy the Beagle: The Rebarkable True Story of Meghan Markle’s Rescue Dog is currently slated for release on Nov. 20. The book is available for pre-order today. Books about royal dogs might not be your cup of tea, but personally, I'm thrilled that this book might raise awareness about rescue dogs and how you can help shelter animals find forever homes.