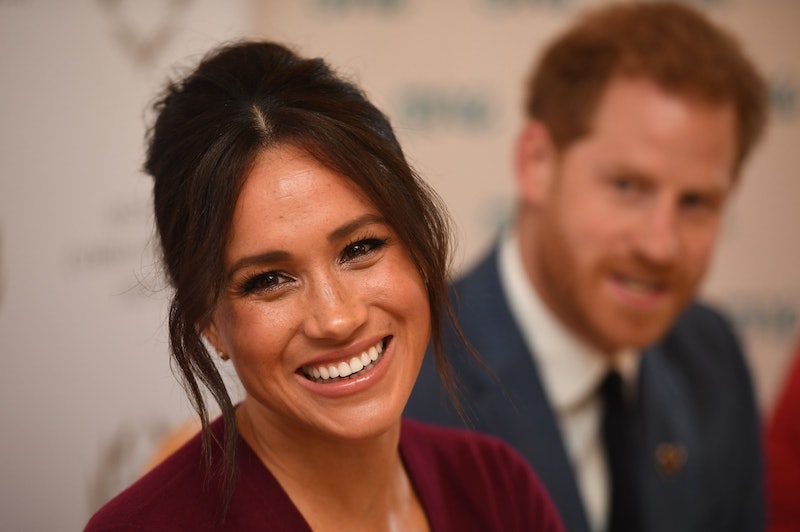 While Meghan Markle and her husband Prince Harry may be stepping back from royal life, the Duchess of Sussex is still using her platform for outreach. She's still visiting charitable, women-centered organizations in Canada, and she's even taking things a step further by using her fashion to make a purposeful statement.

According to Yahoo Style, Markle's earrings from one of her first charity visits in Canada carry a deeper level of significance than simply being pretty studs. Designed by Emily Mortimer, the gold and diamond earrings are named for the goddess Hera. For those who aren't up on Greek mythology, Hera presides over marriage and birth and is often known as the protector of women, making the jewelry a fitting choice for the Duchess given her history of working toward gender equality.

When wearing the earrings, Markle visited two organizations that work directly with women. Her first stop was Vancouver's Downtown Eastside Women's Centre, where women can receive shelter and basic needs as well as meet with advocates who work on their behalf. For her second visit, Markle had tea with women from Justice for Girls Canada where she reportedly discussed climate justice as well as the rights of indigenous people.

Markle's Hera earrings aren't new, either. Like many pieces in her wardrobe, the Duchess of Sussex repeats the Emily Mortimer studs often. Perhaps their most notable appearance was back in October when she attended a panel discussion on gender equality as part of the One Young World summit.

While Markle's Hera earrings are clearly a favorite, her choice to wear them to events that empower women seems more intentional than not.