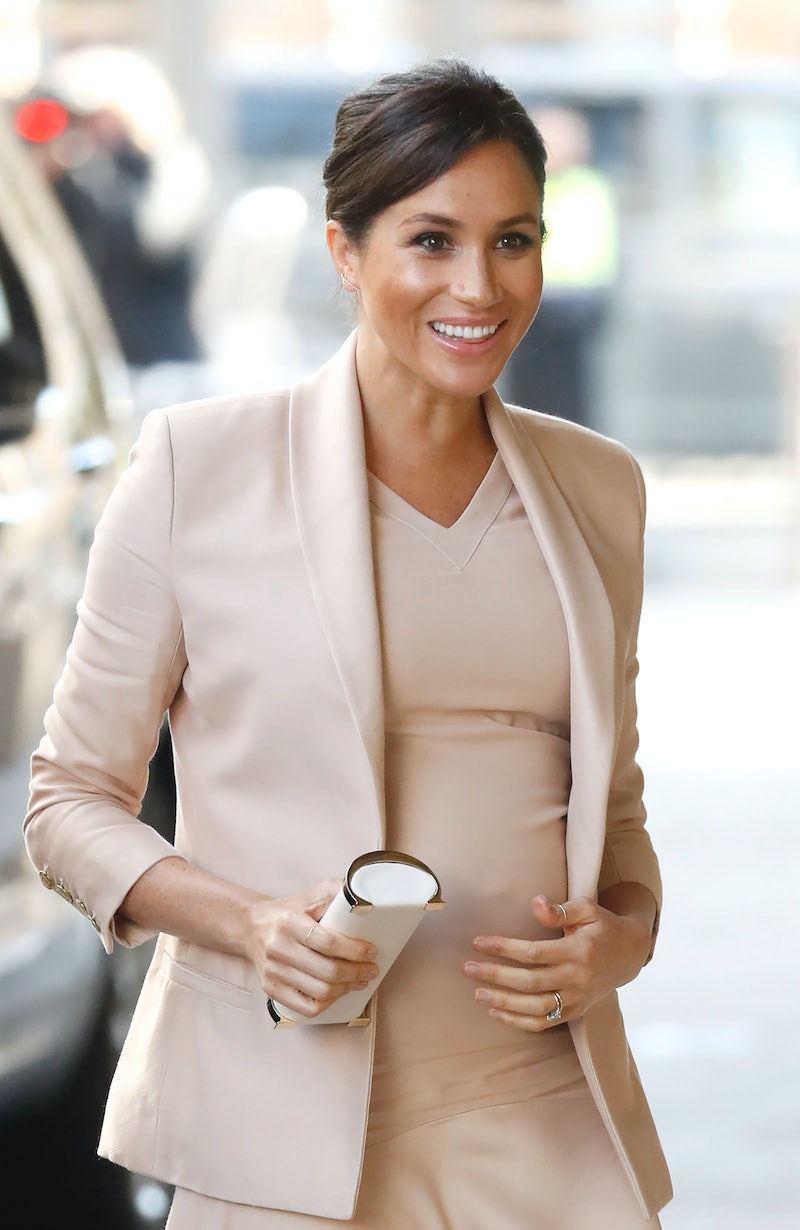 January may seem like the month that never ends, but the good news is that there's more time to see as much royal fashion as possible. The royal family may have gone on hiatus for the holidays, but they're back now. During her most recent outing, Meghan Markle's Altazzura heels caught attention for a super sweet reason, and it'll have you saying "awwww" at the top of your lungs.

If you're not an avid follower of Markle's fashion choices (you should be), spotting patterns in her style or repeats in her wardrobe choices may not be something you notice. The good news is that's what royal fashion lovers are here for, and Markle's latest ensemble sent a collective, romantic sigh across their lips. On Wednesday, the Duchess of Sussex visited one of her new royal patronages, the National Theatre. According to Harper's Bazaar, she wore a gorgeous blush Brandon Maxwell dress with a matching blazer in a soft, monochromatic look. It was her shoes, however, that may be the most notable part of the ensemble.

With the dress and blazer, Markle wore a pair of her most well-known shoes (and she's got quite a few that she rewears). She chose her Aquazurra Very Mathilde Suede Crisscross Pumps, and if they look familiar, there's totally a reason why. According to People, they're the same shoes she wore when she and Prince Harry announced their engagement.

For those not so familiar with Markle's style choices, Aquazzura heels are one of her staples when it comes to footwear. One of her favorite pairs seems to be the Aquazzura Bow Pumps which she wears often and in different colors. It's the fact that she's more prone to wear the bow style that makes her choice of the Matilde Criss Cross memorable. Markle doesn't rewear the style often, and when she does it's hard not to recall the day in Nov. 2017 when she and Prince Harry announced their engagement.

While Markle rarely wears this pair of Aquazzura heels, it's far from the only pair she repeats. Obviously, there's the bow accented pair from the brand, but she's got several designers and styles that she returns to frequently. From her Sarah Flint pumps to her classic Manolo Blahnik pumps, Markle's definitely got favorites when it comes to her footwear, but just because some of her re-wears are luxury fashion items, it doesn't mean she doesn't rock affordable shoes as well.

During her visit to Australia, Markle actually wore several pairs of affordable shoes that you can totally pick up yourself. From her J.Crew ankle boots to her perfectly priced espadrilles, the Duchess clearly knows that a good shoe is a good shoe no matter the price.

While Markle's Altazzura criss cross pumps don't fall into the affordable category, they're still special given where they were first worn. Plus, rewearing shoes (and occasional outfits) means Markle knows that good fashion should never be in the spotlight just once. Some outfits and shoes deserve more than one chance to shine.