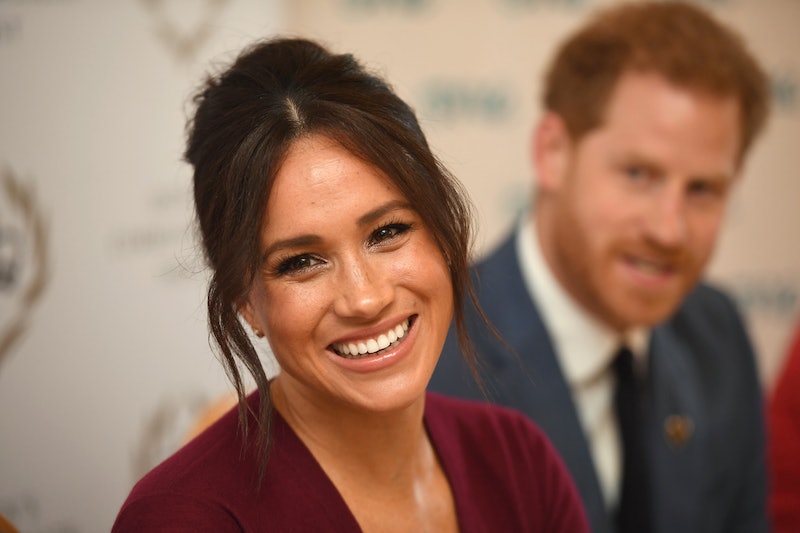 Ring stacks were a thing before Meghan Markle became the Duchess of Sussex. However, there's just something about seeing the royal wear th accessory that makes you go all Mean Girls and "I saw Meghan Markle wearing ring stacks, so I bought ring stacks." Her latest ring addition, though, isn't just a new take on the ring trend, the pieces have a special meaning for the Duchess.

While everyone was freaking out about Markle's gorgeous leather BOSS skirt and coordinating v-neck sweater, she debuted two new accessories that have meanings close to her heart. On Oct. 25, the Duchess of Sussex attended a roundtable discussion on gender equality for the One Young World summit with her husband Prince Harry. While Markle is passionate about the conference, which empowers young leaders, the jewelry she wore with her ensemble also supported another cause she believes in: animal conservation.

According to People, Markle's stunning skirt and sweater was paired with two new rings from Canadian jewelry brand Vargas Goteo. The company, based in Montreal, creates sustainably-sourced jewelry with a focus on protecting endangered animals and helping raise awareness for conservation efforts. The brand donates a portion of its sales to various conservation charities around the world.

At the event, Markle chose the Manta Kiss Stack Ring, a sleek half-moon design, that helps support the Manta Trust, a UK-based charity dedicated to the conservation of the animal. Yes, you can still buy the piece, but you should know that it'll cost you a cool $600.

For her second item from Vargas Goteo, Markle chose the High Seas Bow Knot ring, a gorgeous piece tied into a sailor's knot. While the ring doesn't directly support any additional charities, it is markedly more affordable than the Manta ring coming in at $180.

The Duchess' decision to opt for the pieces is inline with her existing efforts with conservation, a passion she and her husband share. Back in 2017, when the pair were dating, they visited Botswana together and worked with Elephants Without Borders, an organization that helps to track the animal and prevent poaching. The couple's official Instagram account revealed never-before-seen images from the trip back in August.

Prior to the pair's marriage in May 2018, the Duke and Duchess announced that they would be forgoing wedding gifts in favor of donations made on their behalf to seven chosen charities. Each of the organizations featured a different focus, but one was (you likely have already seen this coming) related to conservation. The pair listed Surfers Against Sewage, an agency which helps to promote marine conservation.

While Markle may have looked incredible in her monochromatic moment, her accessory choices prove that the Duchess is intentional with her sartorial choices in the best way possible.