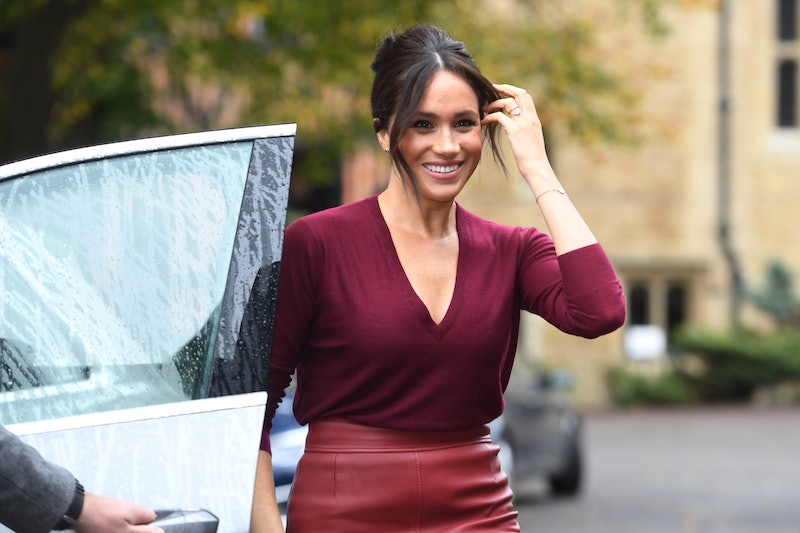 Turns out, Meghan Markle may be more like you than you thought. You know that great pair of jeans you have multiple pairs of? Or that ultra-comfy dress that's perfect for every occasion so you've got to buy five colors? Well Meghan Markle does the same. This fall, she's repeating an edgy but classic piece in a whole new color that will make you say, "Oh yes, I guess it is fine to have six of these shirts."

According to Harper's Bazaar, on Oct. 25, Markle attended a roundtable discussion about gender equality as part of the One Young World Summit, marking her second appearance in honor of the event. For the gathering, the Duchess of Sussex chose to go fully monochromatic wearing a BOSS by Hugo Boss leather pencil skirt in a gorgeous wine color. She paired the skirt with a tucked in, slightly deeper hued v-neck pullover from brand Joseph and finished the look with yet another repeat brand of footwear: her Sarah Flint pumps.

While the monochromatic wine look may seem new, it turns out that fans have seen this skirt before. The magazine reports that the skirt is the same one Markle wore last year when she and Prince Harry visited Sussex for the first time. The difference is that back in 2018, the Duchess chose to wear the piece in a different color — a deep hunter green.

Markle's rewear of the skirt isn't the first time she's taken a piece she loves and revamped it. Back in January, Markle stepped out in a vibrant, color blocked look. The Duchess wore a purple dress from Aritzia (which she just rewore for the One Young World summit opening) and paired it with a bold red coat from Sentaler. It's the coat fans of her fashion had seen before.

Markle wore the same style outerwear in tan at Christmas 2017 when she attended mass with the royal family after she and Prince Harry's engagement was announced. Plus, she even revisted the coat again this month when she returned to the tan version at the 2019 Wellchild Awards.

As for Markle's skirt, the exact piece is still available for a cool $595 at Nordstrom, but only limited stock in sizes 0-12 are left to shop. Turns out, though, that the green and red versions aren't along. There's yet another hue. The piece also comes in camel, a perfect neutral for fall. Perhaps don't be so surprised if the Duchess herself pops up in the third color. Because clearly, when it comes to her fashion, Meghan Markle plays favorites.