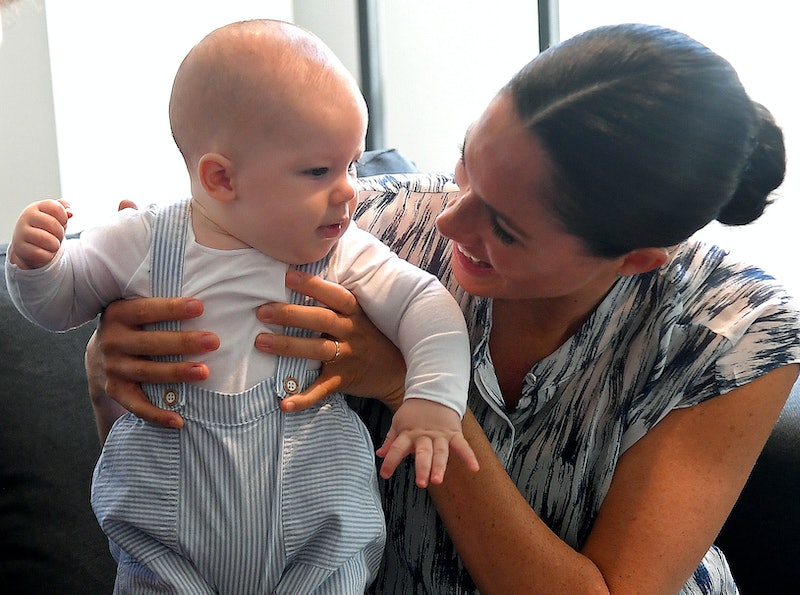 Whether you know all there is to know about the royal family or couldn’t tell your Princes from your Dukes, it’s hard not to be glued to the content that’s come out of the Duke and Duchess of Sussex’s current tour in Africa. Prince Harry and Meghan Markle are the most photogenic couple in the public eye these days, but they weren’t the ones in the limelight this time. Dancing, high-fiving, and charming his way through his second royal appearance, baby Archie Harrison has melted hearts everywhere. And Meghan Markle's nickname for Archie will probably send you into overdrive. He might of been surrounded by four of the most well-recognised public figures in the world, but baby Archie certainly stole the show.

On Sept. 25 Meghan Markle, Prince Harry, and baby Archie went to Cape Town to visit the anti-apartheid and human rights activist Archbishop Desmond Tutu. The meeting was part of the first international tour that the family are doing together and Archie’s second public appearance. To say he was a cutie is a massive understatement. People reported that, as the five month old was brought to meet Desmond Tutu, Markle said, "Say hello! Hello, hi!" and when he started to dribble, she laughed and said, "Oh, Bubba!"

Bubba?! Such an adorable nickname. And I don't know about you, but it's definitely one I've used once or twice myself. You can't help but shout it out when babies do something cute, can you? "Ahhh bubba!" You see? Royals, they're just like us.

The press reported that Archie was good as gold all during the visit. ET’s royal expert Katie Nicholl, who was in South Africa reporting on the royals' visit, said: "[He] gurgled, he giggled. There was a little yelp of excitement as he was taken up the stairs. ...No tears! In fact, he seemed more interested in the cakes in front of him than anything else." And if you follow the Sussex Royals instagram account you can see exactly what she meant.

In a short clip surmising their visit, baby Archie can be seen dishing out high-fives and smiling from ear to ear, and when Markle lifted him up he even does a little wiggle like he’s dancing. It’s all exceptionally cute.

Cosmopolitan said that, as Archie sat giggling away with his parents, the Archbishop, and Thandeka Tutu (Desmond Tutu’s daughter), Markle asked "Is that funny?” Prince Harry said "I think he knows exactly what’s going on," and Thandeka joked and said, "You like me best, yes! Oh, you like the ladies better, yeah." Markle then replied, "He likes to flirt." Well that’s me done, too much cuteness.

The visit in Cape Town is part of the ten-day royal tour that the Duke and Duchess of Sussex have undertaken around South Africa. Prince Harry will also visit Malawi, Angola, and Botswana by himself. A spokesperson for the royal couple told The Telegraph, “As Her Majesty’s Commonwealth Youth Ambassador, The Duke now has a platform to be able to support young people across Africa in reaching their full potential. Through her Patronages, The Duchess will be working with organisations to promote women’s education, health, entrepreneurship and leadership.” They continued: “The Duchess of Sussex is particularly looking forward to the opportunity to learn from inspirational women in the region.”

They may be British royalty and one of the most famous families in the world, but when you see pictures of Prince Harry, Markle, and Archie, and hear her calling him “Bubba,” it’s hard not to think that they’re so similar to a lot of other young families. Baby Archie rocked his second royal appearance — and in £12.99 H&M dungarees, nonetheless. Here’s hoping he makes another public appearance soon.