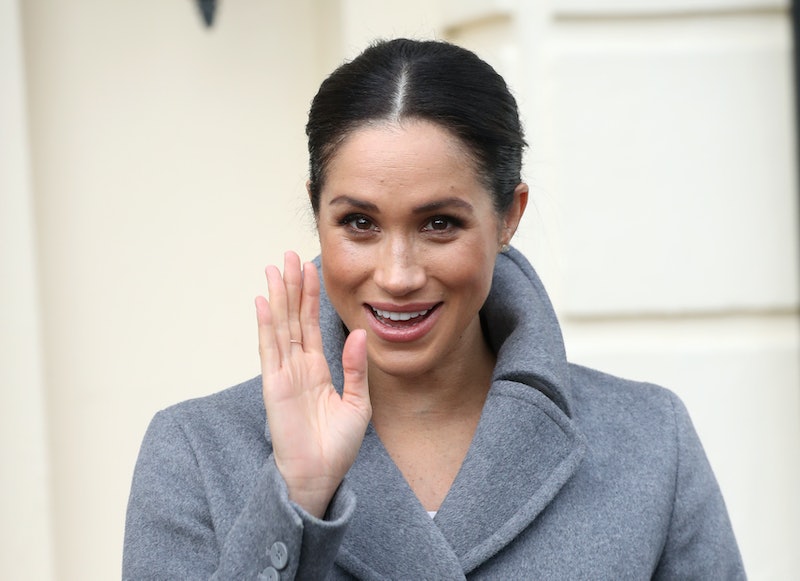 Meghan Markle continues to prove that she's an absolute queen. On one of her latest engagements, Meghan Markle had a meaningful interaction with a woman who said that she chose to have a career instead of having children, according to ELLE. And the royal's response to the woman's statement shows exactly why fans flock to the open-minded Duchess of Sussex.

During her latest outing, Markle visited the Royal Variety Brinsworth House, which serves as a nursing home for those who worked in the entertainment industry. It was one conversation in particular that she had that caught the attention of many, including Emily Andrews, a royal correspondent for The Sun, who originally published the clip of the interaction on Twitter.

In the video, Markle can be heard asking one resident, "Do you have kids?" The woman replied, "No I don't, I had a career." The duchess, in turn, said, "Yes... that I understand." Markle's response, where she acknowledges that a woman's choice to not have children is indeed valid, is incredibly meaningful.

While it should be obvious that choosing to not have children is a perfectly valid choice, there's still a stigma attached to said choice, as ELLE pointed out. So, having someone as high-profile as Markle display such a natural understanding of living a child-free lifestyle is so important in helping to get rid of any unfair judgment.

In addition to speaking to various residents of the Royal Variety Brinsworth House, which counts Queen Elizabeth as its patron, Markle also decorated Christmas cards and listened to some holiday carols during her visit. Given that the Duchess of Sussex has an obvious tie to the Brinsworth House's entertainment background, since she's a former actor herself, it's entirely possible that she could become the organization's patron come 2019.

According to Marie Claire, Elizabeth is set to pass along one of her patronages to Markle in 2019. Although, the specific patronage that she's set to give her granddaughter-in-law has yet to be confirmed. So, it's entirely possible that Brinsworth House could be on the short list, especially since it appears the duchess had such a grand time there during her most recent engagement.

Markle's recent outing will likely be her last official one before Christmas. But, royal watchers don't need to worry about the next time they'll get to see the duchess in action again. Just as she did last year (which, as you'll recall, was a tradition-breaking move), she's set to appear alongside the rest of the royal family for various Christmas Day festivities. As the royals do every year, the whole family will gather to spend the holiday at Sandringham House.

Despite many reports to the contrary, it appears as though Markle's mother, Doria Ragland, will not be spending Christmas Day with her daughter and the rest of the royal family, per Us Weekly. On the bright side, though, the report also detailed that Ragland is still "welcome at Sandringham," but did not receive a formal invitation for the holiday.

Even though she may not be spending the exact Christmas Day with Ragland after all, it will definitely still be exciting to see how the always forward-thinking Markle spends her first holiday as an official member of the royal family.