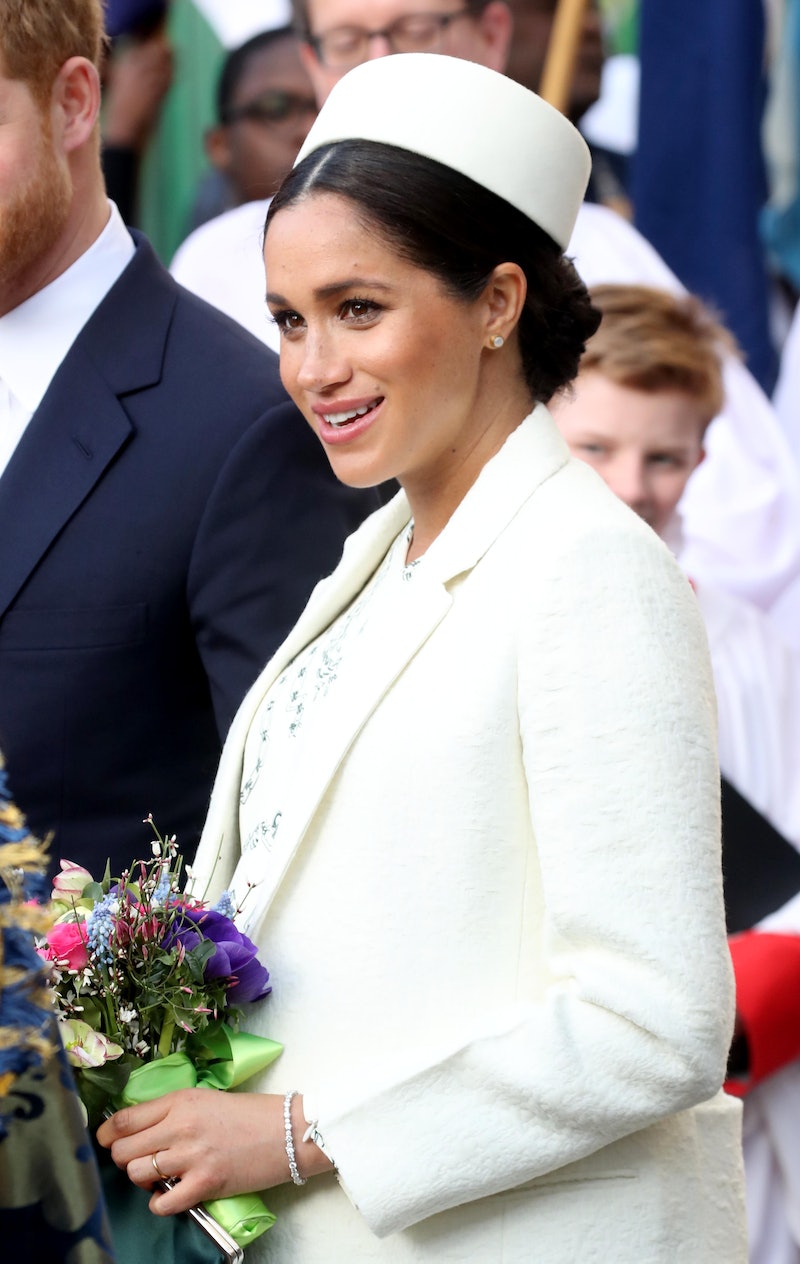 Meghan Markle is known for her designer, well-made pieces — but they can be hard to copy because of their price tags. But every now and then fans get a break from the fashion gods when an affordable option from the royal wardrobe comes their way. Meghan Markle's Roksanda Athena Dress has a dupe, and it costs just a little over $100.

The Duchess of Sussex first wore the dress while on the Australian and New Zealand royal tour with Prince Harry in 2018. She wore the dress (offered in sizes 00 to 16) while on a visit to the Macarthur Girls High School in Sydney last October. The mid-century inspired frock is a two-tone blue cocktail dress made from crepe. It's a sleeveless A-line midi, and its navy color is broken up by a bright blue strip at the hem. In order to play up the retro, '50s vibe, the dress's skirt also features prim pleats.

The royal fashion Instagram account, @Regal_Replikate, was the first to spot the dupe. The frock in question is called the Helenora Dress, and normally retails for $185. It's currently on sale for $125, but according to @Regal_Replikate, the item can sometimes go even lower in price.

When the post was submitted to Instagram, the dupe dress was on sale for $64. The dress is a near identical dupe of the duchess' original midi, but with some slight variations. The most obvious one is that the Hobbs London dress has fitted sleeves rather than being sleeveless. It also has a more subtle pleating, and the blue band of color on the hem is a much vivider blue. It comes off as sapphire rather than nougat blue. But when it's $1,000 in savings between the two frocks, one has to admit they look pretty similar.

This isn't the first dupe of the royal family's outfits. Both Markle and Kate Middleton are fashion icons, and a lot of what they wear instantly sells out. But if it's an expensive designer piece, fans wait for the affordable dupe to arrive in stores. One such copy-cat look was Middleton's Sleeping Beauty Gucci gown.

The dress could have cost anywhere upwards of thousands of dollars, but the dupe from Chi Chi London was $98.

In 2018, there was a dupe of Middleton's iconic lace-trimmed wedding dress. Her original wedding gown was custom made by Alexander McQueen and reportedly cost over $430,000.

The H&M Wedding Shop offered up a fast-fashion version in 2018 that cost $299. The H&M version did not come with a nine foot train and was cream rather than white, but the similarities were obvious.

Markle's wedding reception dress also got a dupe. But since the Duchess of Sussex's gown was so minimalist, the dress could also be worn during a night out and not just a reception.

Thanks to these dupes, royal fashion fans can copy Markle's looks while on a budget.