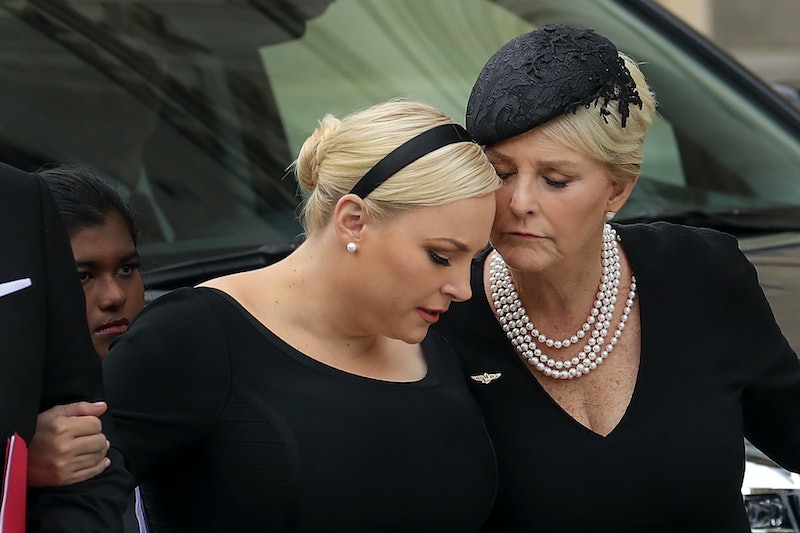 While hosting The View on Monday, Meghan McCain's comments on Thanksgiving without her dad showed it's more than normal to feel down if you're enduring difficult circumstances during the holidays. "I'm with you," McCain assured her audience. This is one of the many times McCain has opened up about how she's coping with her father's death.

I think sometimes you watch daytime talk shows and everything is bubbly and beautiful. If you’re having a bad holiday season, right here, I’m with you. OK? Sometimes it’s hard, and it’s really hard with social media that everyone looks like they’re having a perfect holiday. And for those of us who aren’t, it’s OK.

The 34-year-old lost her father, Republican Arizona Sen. John McCain, in August after he passed away due to brain cancer. After her father died, McCain wrote a heartfelt statement about the late senator on Twitter. "My father's passing comes with sorrow and grief for me, for my mother, for my brothers, and for my sisters. He was a great fire who burned bright, and we lived in his light and warmth for so very long," she said.

On Nov. 18, McCain took to Instagram to talk about her father. She shared a photo of the late senator busy at the kitchen stove while cradling a phone by his ear, frying bacon in a pan. In the caption, McCain wrote that it had been at the time 84 days without her dad.

"You used to get up early in the morning and go get us all Starbucks in town in the Cottonwood Safeway and then come home and make eggs and bacon," she wrote in the caption. She also said that it was "surreal" to go from talking to her father "seven times a day to never."

McCain has been open about her mourning on social media, including counting the days that have passed since her father died. In another photo tagged to Thanksgiving on Nov. 22, McCain said the holiday was her father's favorite. It isn't just about her own loss, though, as McCain added, "And to everyone else who this holiday is hard for — you are not alone, I am thinking of all of you."

Shortly before Thanksgiving, McCain shared another photo of her father in October. She said it had been 66 days without him at the time and that she would wake up "every morning still instinctually trying and reaching to call you on the phone." She said she missed her father's laughter and "dark sense of humor." The View co-host added that she missed her dad so much, "it physically hurts my heart."

With McCain's remarks on Monday, those who have lost a loved one — be it in the form of a family member or friend — may feel that they are not alone in their grief after all.