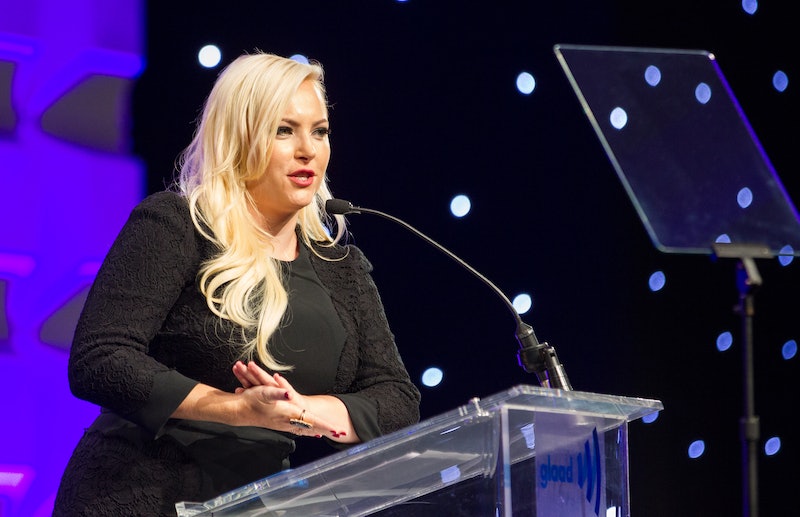 During a CNN interview on Sunday, Meghan McCain said her views on the Republican party are starting to shift. McCain, who is the daughter of the late longtime Republican Senator John McCain, told the network that she believes Donald Trump has changed the nature of the Republican party — and she's struggling to navigate the party's transformation.

McCain made her comments during an interview on The Van Jones Show. The host asked McCain to address why she's not referring to herself as a Republican anymore. McCain cited Trump's influence on the party as the rationale, saying:

I call myself conservative. I mean, I'm still a member of the Republican party and I still vote on the Republican ticket. But, Republicanism is so tied up with being for Trump. I'm not a 'Never Trumper.' Trump didn’t melt my brain. I can still see the forest for the trees and it didn't expunge all my conservative principles out of me ... I'm just trying ... women like us [who identify as conservatives] are just trying to navigate this right now.

During the interview, McCain also indicated that she's not sure what the future will look like for the Republican party. "Something will come out of this in one way or another. I'm just not sure if it's going to be the traditional Republican party, because Trump changed it so much," she said to Jones.

McCain continued with her reflection on the party's future prospects by adding that she believes the GOP's value system has changed. As McCain asserted to Jones:

Its [the Republican party's] character seems to be gone. Growing up, my father was, like, militant about character. Now it seems like lying is OK. Stealing, it's a little nebulous. I don't think those are American characteristics. And it scares me — a lot.

While McCain is not certain about the future trajectory of the Republican party, she also made it clear to Jones that she still believes in conservative ideology. "I'm not a liberal and I think it would be intellectually dishonest for me to go on TV [in her job as a co-host of The View] and start espousing beliefs I don't believe in," McCain said on CNN.

McCain is not the only prominent conservative commentator to indicate that she believes the Republican party has fundamentally changed because of Trump's presidency. S.E. Cupp, a conservative CNN television host, said back in June 2018 that she thinks the party now revolves primarily around Trump. As Cupp described during her CNN show, S.E. Cupp Unfiltered:

Where Republicans once stood on principle ... now we stand, it seems, on Trump and Trump alone, with Republicans all too eager to table their principles for this president. The party of ideas is gone ... Instead, Republicans are the party of one man and whatever he decides he capriciously believes in that day.

Indeed, during her own interview McCain cited Cupp as an example of another conservative who, similarly to herself, is struggling to come to terms with the evolution of the Republican party under Trump. For McCain, Cupp, and likely others, it's difficult to say what the GOP may look like — and what values it will represent — for the duration of Trump's time in office and beyond.