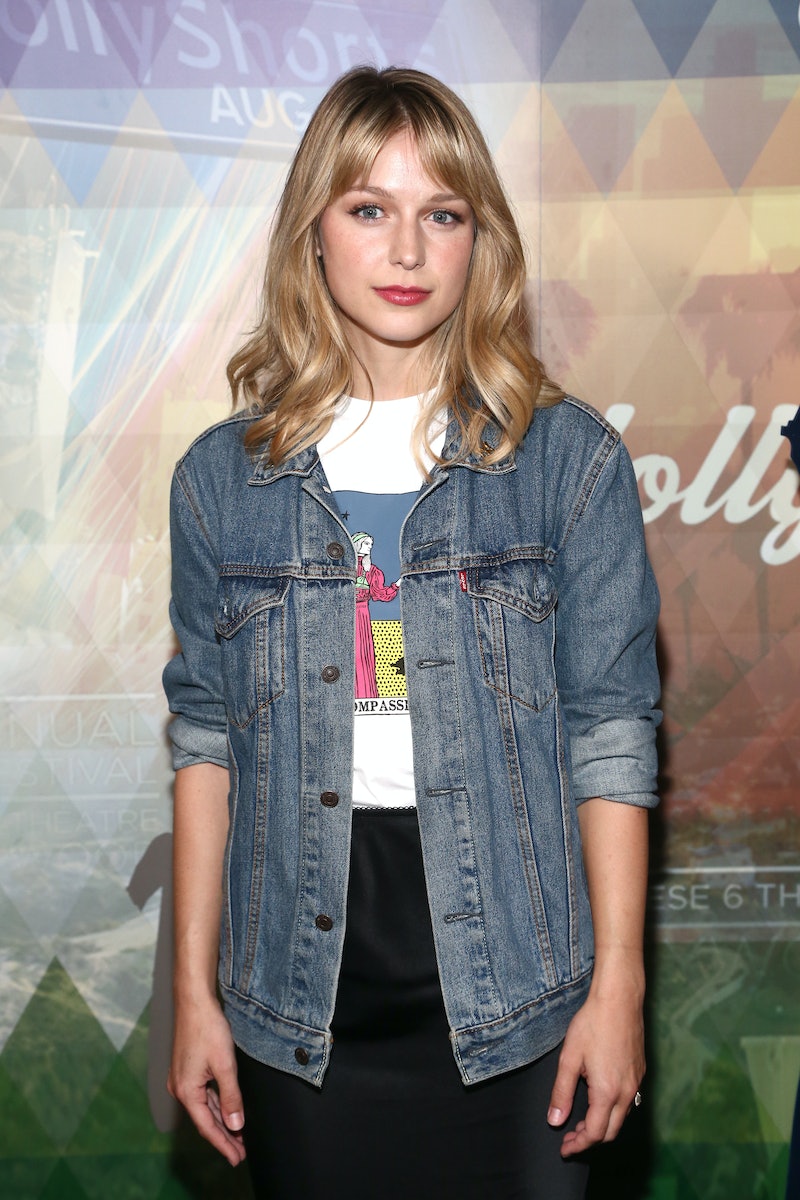 In an almost 15-minute IGTV video posted on Nov. 27, Supergirl actor Melissa Benoist said she is a domestic abuse survivor, and hopes that her story will empower other women experiencing intimate partner violence (IPV). During the video, Benoist described how emotional manipulation and extreme jealousy at the hands of her partner escalated into physical violence. Benoist did not reveal the alleged abuser's name, only describing him as being younger than her.

She said her alleged abuser would monitor her devices, ask her to dress conservatively, and would even get angry about any on-screen love interests she had at her job. "Work in general was a touchy subject," Benoist explained. "He didn't want me ever kissing or even having flirtatious scenes with men, which was very hard for me to avoid, so I began turning down auditions, job offers, test deals and friendships, because I didn't want to hurt him."

The CDC describes IPV as a public health problem, which can involve "physical violence, sexual violence, stalking, or psychological harm by a current or former partner or spouse." This type of violence can occur among heterosexual or same-sex couples and does not require sexual intimacy. According to the CDC, this "serious, preventable public health problem" affects millions of Americans.

After five months of dating, Benoist said in the Instagram video that the mental abuse turned physical when her former partner allegedly threw a smoothie in her face. She described the alleged violence as only escalating from there. "I learned what it felt like to be pinned down and slapped repeatedly, punched so hard I felt the wind go out of me, dragged by my hair across pavement, head-butted, pinched until my skin broke, slammed against the wall so hard the drywall broke, choked," she recalled. The actor said in the video that her partner would allegedly put her in a bathtub with the water running after the attacks, before returning to apologize, she added.

Benoist explained that she stayed in the relationship because she "fooled" herself into thinking she could "help him." She even admitted to using violence herself as a means of protection — something she's "not proud of." When her now-ex allegedly threw an iPhone at her face, breaking her nose and damaging her vision, she finally confided in a friend, who helped "bolster" her to eventually end the relationship.

"I hope that telling my story will prevent more stories like this from happening," she added in the video. "If you are enduring what I went through and you see this, you might be able to find the tiny straw that will break the camel's back."

In a follow-up Instagram post, she underlined the statistic that about one in four women is affected by IPV, and also thanked those who "took the time" to watch her IGTV video. "It is never easy to reveal the most painful truths, but I've been bolstered and inspired by the women before me who have come forward about assault and abuse," she wrote, noting there's "strength in numbers."

Benoist added the "long and winding road of healing and reconciliation" led her to "feel strong enough to talk about my experience openly, honestly and without shame." Ultimately, the actress wrote, she hopes to "empower others to seek help and extricate themselves from abusive relationships." As she concluded her Instagram caption, "Everyone deserves to be loved void of violence, fear and physical harm," tagging the Futures Without Violence IG account.

In September 2019, Benoist married actor Chris Wood. Per The Hollywood Reporter, Benoist has been linked to photographer Nick Vorderman and was previously married to actor Blake Jenner before filing for divorce in December 2016.

More like this
Bachelor Nation's Blake Horstmann Is Dating 'Love Is Blind' Star Giannina Gibelli
By Jake Viswanath and Radhika Menon
Selena Gomez Is Fine Being Single, But She Still Manifested Romance On 'SNL'
By Martha Sorren, Jake Viswanath and Jack Irvin
Evan Rachel Wood Has Stayed “Good Friends” With Ex Katherine Moennig
By El Hunt
Who Is 'Umbrella Academy' Star Elliot Page Dating After His Divorce?
By Jake Viswanath
Get Even More From Bustle — Sign Up For The Newsletter