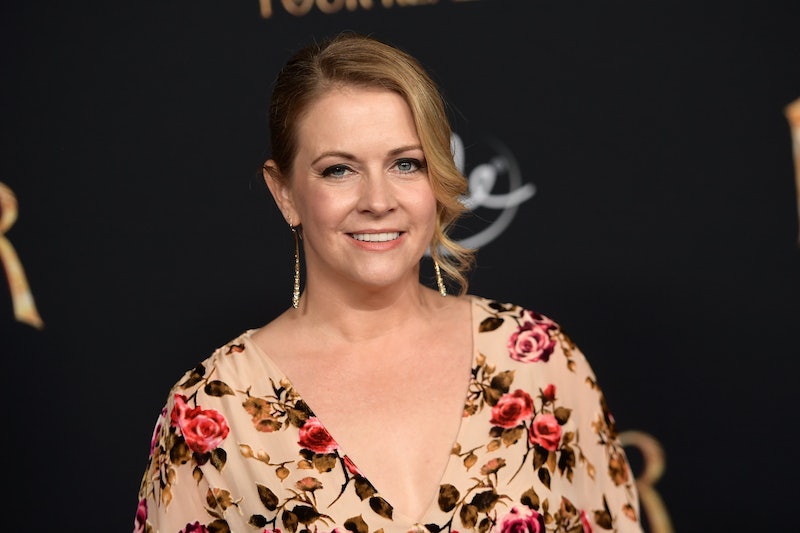 Most women don't get their first mammogram until age 40. However, an increasing number of women are being diagnosed with breast cancer in their 20s and 30s. And actor Melissa Joan Hart's recent breast health scare is an important reminder that everyone should be getting their mammograms and performing breast self-exams on the regular. In an Instagram post, Hart, 43, revealed she had an irregular mammogram and was called in for more tests. While she got the all-clear from doctors, her emotional video highlights how vital it is to take charge of your breast health.

"Just wanted to share my little journey of emotion this afternoon!! All is good but just feeling vulnerable today especially," Hart said in an Instagram video. "Reminder to all women over 35 — get your mammogram!!" In addition to scheduling a mammogram between the ages of 35 and 40, it's also important to perform breast self-exams now.

"Performing regular breast self-exams, from a young age, is very important because you learn what your baseline is. Once you know what your normal healthy breast tissue looks and feels like, if anything does ever change, you can be your own health advocate and speak from a place of confidence," Betsy Nilan, president of The Get In Touch Foundation, the creators of the breast self-exam app Daisy Wheel, tells Bustle.

"If something does appear to be abnormal, you should talk to a health care professional right away. My mom had breast cancer so when I do a breast self exam there is sometimes something in the back of my head that has me a little anxious about detecting something, but then feel empowered because doing a BSE has made so aware of my body and what my normal is."

My roommate was diagnosed with triple-negative breast cancer in her 30s. She found the lump in her breast by doing a breast self-exam, and early detection saved her life. In fact, a 2011 study published in the Journal of Women's Health reported that 50% of women with breast cancer are initially diagnosed after performing a breast self exam, including Nilan's mother.

"My mom detected her breast cancer at age 39. She had been performing regular breast self-exams her whole life and when she found a lump on her breast, she was able to speak from a place of confidence, even when her doctor told her to not worry about it, and come back in a year. She ended up getting a second opinion because she knew her body better than anyone else," Nilan says.

Because of her family history, Nilan plans to get her first mammogram when she turns 29 next year. In addition, she performs regular self-exams, which she says is important to start doing from a young age so you know what's normal for your body. The Cleveland Clinic noted on its website that while women who do not have a family history of breast cancer should begin getting mammograms at age 40, those who are considered high risk should begin sooner. If you do have a family history, talk to your doctor about when you should start regular screening.

"We recommend performing breast self exams once a month to get comfortable with what your normal healthy breast tissue looks and feels like. On our free app, you can actually set reminders that sync to your calendar," Nilan says. "You have the option of weekly, bi-weekly, and monthly reminders to help you get into the habit."

If you do find a lump or an irregularity, it doesn't necessarily mean you have cancer. But it is important to go to your doctor and request a mammogram as soon as you can. While getting your first mammogram can feel overwhelming, I've had one and it wasn't as scary as I thought it would be.

Like Hart, I also had a callback for further tests. I have dense breast tissue, and women with dense breast tissue sometimes require additional imaging, like a breast ultrasound. After my ultrasound, I was told to come back in six months. It's an appointment I haven't kept. I have a lot of excuses. Moving three times in as many months, having to find a new doctor, telling myself it can wait until tomorrow. But, after hearing Hart's story, I plan to schedule my follow up ASAP. Because, as Nilan says, "Breasts are more than just an external body part, and we have to take care of them."

More like this
Rachel Zegler Reveals She Had Breast Cancer Scare
By Radhika Menon
This Psychological Effect Might Be Keeping You From Hitting Your Goals
By Lexi Inks
I Tried The Air Up Water Bottle, Which Flavors Your Drink With Scents
By Carolyn Steber
How Yin Yoga Delivers TLC To Tight Muscles
By Carolyn Steber
Get Even More From Bustle — Sign Up For The Newsletter