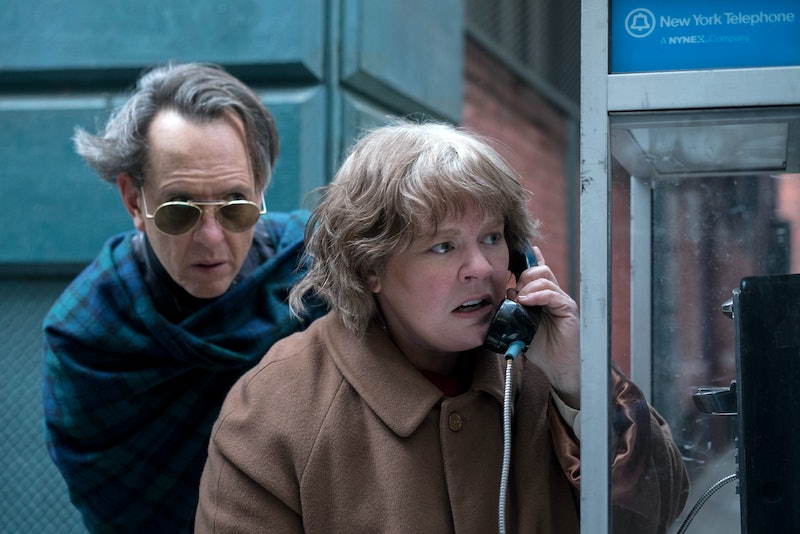 Lee Israel's story doesn't sound all that heroic on paper. A biographer whose legitimate work was drying up, the writer turned to forging letters she attributed to legendary literary wits such as Dorothy Parker and Noel Coward. Melissa McCarthy disappears into Can You Ever Forgive Me?, and the movie portrays the real woman and her glorious complexity in an empathetic — but never pitying — way that will have you rooting with her throughout.

It's a tall order to authentically play someone who was notoriously hard to get to know, even to her closest friends. (Israel passed away in 2014 at the age of 75.) But doing so left the movie's star with an acute understanding of the loneliness under Israel's standoffishness and bravado. It's something that she hopes moviegoers will take away as well.

"Passing people on the street, maybe you look at them differently or actually look at them," McCarthy says, looking out on a rainy New York City from a midtown hotel room. "I sometimes think if you just actually see someone, and they know that they’ve been seen, there’s a cumulative effect about that. That they’re not invisible."

In the movie, Lee hides in plain sight around New York. She drinks alone in the same bar and peddles her wares to a series of dingy (and probably now defunct) bookshops under the cover of lies. She's a source of frustration for her agent and an unsolvable problem to her ex-partner. But even without their say-so, she is unapologetically and bravely herself.

"She didn’t need the reflection of how other people saw her to decide who she was," the actor explains. "Especially today, when there’s so much through social media of, 'What do you think of my vacation? What do you think of my family? Do you think I’m OK?' ... I think it’s a pretty good reminder that you should be determining who you are from the inside out, not vice versa."

And while Lee may be the least social character McCarthy has played, the actor feels a kinship with her. In fact, it may be her most personal role yet, despite the fact that she generally tries to avoid that kind of thing.

"I really don’t have any need or desire to play someone who’s very similar to myself. I feel very awkward, I don’t know where to put my hands," she laughs. "But as a character, there’s very definitive choices. I know exactly what they’d say. I know how they move, how they talk. There’s never a hesitation. And I thought it was really interesting that Lee did the exact same thing through her writing."

The writer had reason to feel confident in the way she channeled these people. In her memoir, she claimed to have written 400 forgeries, many of them fooling collectors and experts. "She was a tremendous writer, and really, really funny," McCarthy assesses. "She could be anyone, as long as she could do that behind the veil. We have a very similar trajectory that way."

The actor's fondness for the woman comes out not only in the way she speaks about her, but in the performance itself. Her portrayal doesn't soften or sugarcoat Lee, which is something she probably would have hated. But McCarthy thinks that if they'd had the chance to spend time together, they would've gotten along... eventually.

"I don’t know, I think I would have bugged her. I’m too chatty. [But] I think I would have worn her down. There may be a bit of Labrador in me," she says with a smile. "I always think, there’s always a soft chewy center, even if someone doesn’t want to talk about it, doesn’t ever want to show you."

Getting to know Lee through this project reminded McCarthy of time she spent with seniors in her youth: first, living with her great-great-grandmother, then working at a nursing home. She has an admiration for "certain older people because they don’t care anymore, in the best way," she says. And Lee had that attitude — that she was under no obligation to make anyone feel comfortable — throughout her life. "I had to deal with it so early. Maybe that’s why I find her so charming," she adds.

At publication time, Can You Ever Forgive Me? has a 100 percent fresh rating on Rotten Tomatoes, and McCarthy's performance is already generating awards buzz. But that recognition is icing on the cake for the star.

"You get behind a movie because you’re like, 'Oh, I wish people knew that story," she says. "With Lee, I feel so personally responsible and to have people be like, 'I felt something. I really like her'... to me, that's the whole thing."