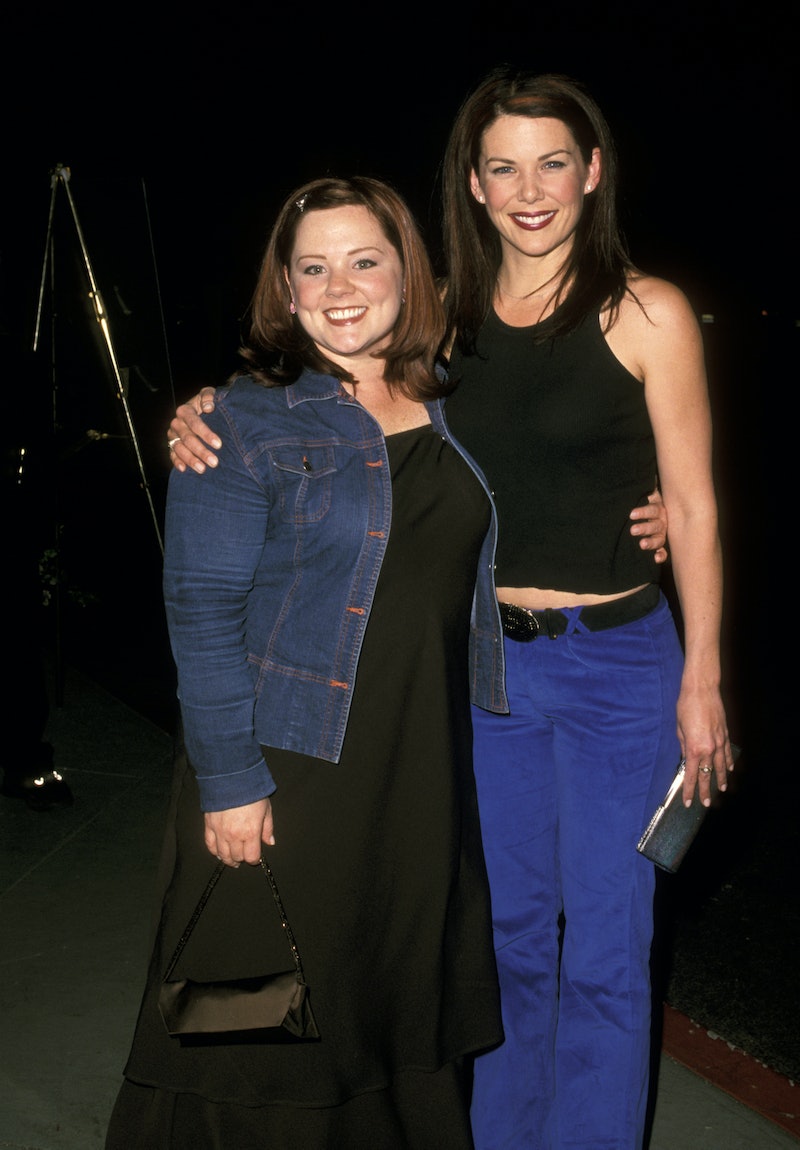 Lorelai and Sookie are together again in Melissa McCarthy and Lauren Graham's Gilmore Girls reunion photo. "It's only taken 20 years for my growth spurt but I’m finally taller than LG!!" McCarthy, who played Sookie St. James, captioned the Feb. 13 Instagram post with her (usually taller) former costar. While the reason the women are together again remains unclear, Graham (aka Lorelai Gilmore) seems to be in the outfit she wore during her appearance on The Ellen DeGeneres Show which aired on Thursday, Feb. 13.

Naturally fans are still eager to know what the reunion could mean however, with many wishing for more GG content. One of the most-liked comments under McCarthy's photo asked if the women were shooting a new season Netflix's 2016 Gilmore Girls: A Year in the Life revival. While Graham's wardrobe doesn't seem to suggest they were actually filming any scenes, that doesn't rule out the possibility a new project could be on the horizon.

Although Netflix hasn't yet made any announcement about a second Year in the Life season, creator Amy Sherman-Palladino revealed on The Hollywood Reporter's "TV's Top 5" podcast that she's "absolutely open" to doing more episodes. "I talk to Lauren constantly. And we’re very tight with Milo [Ventimiglia], Kelly [Bishop], and Alexis [Bledel]. We’re tight with the Gilmore family," she added.

Due to scheduling conflicts, McCarthy only had time to film one scene for the Netflix Year in the Life followup in 2016. When TVLine interviewed Sherman-Palladino at the time, she revealed that McCarthy and Graham's chemistry was strong as ever both on and off screen during their one day of filming together. "The two of them are like a weird, psychotic Ethel and Lucy when they get together off camera; they finish each other’s thoughts and they have a whole physical thing that they do," she shared with the website in Nov. 2016.

Graham's description of the same day shows how truly tight her and McCarthy's bond remains. Explaining to TVLine that McCarthy's reprisal of her role as Sookie was "the final piece of the puzzle," she recalled their emotional day of shooting. "I was a complete mess," Graham confessed. "That was near the end of filming and I thought I [already] cried every tear that I had. And to be there with her and click back into our genuine friendship and also our Stars Hollow friendship was… really mind-blowing."

Whether or not they're teaming up for more Gilmore Girls, fans at least have this reunion photo to show that McCarthy and Graham are still as close as Sookie and Lorelai.

More like this
Ashton Kutcher Wants Danny Masterson “To Be Found Innocent” In Rape Retrial
By Jake Viswanath
At 28, Debra Jo Rupp Was Living A Much Different '70s Show
By Grace Wehniainen
All The ’70s Easter Eggs You Missed In 'That ’90s Show'
By Grace Wehniainen
The OG Power Rangers Are Returning For A Spandex-Clad Special
By El Hunt
Get Even More From Bustle — Sign Up For The Newsletter
From hair trends to relationship advice, our daily newsletter has everything you need to sound like a person who’s on TikTok, even if you aren’t.