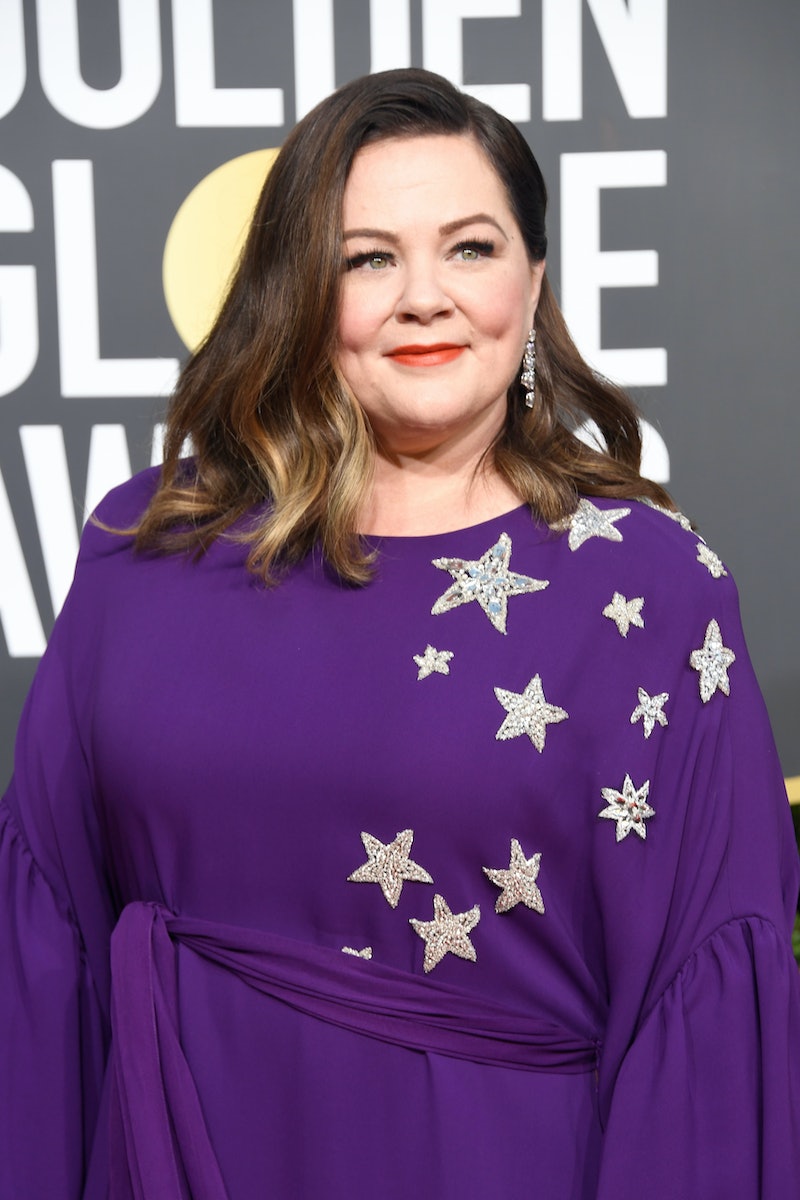 Melissa McCarthy is always one to watch on the red carpet. Her glamorous, yet practical style makes for memorable looks that any fashion lover can appreciate. So when Melissa McCarthy wore a royal purple and silver star gown to the Golden Globes, style fans took note — and it's easy to see why. This is one dress that is literally fit for a star. Sorry, I couldn't help myself.

McCarthy rolled up to the Golden Globes red carpet wearing a floor-length purple gown with silver stars affixed to one shoulder by Reem Acra for 11 Honoré. The flowing look, which was cinched around the waist with a tie to add some structure, had billowing sleeves that cascaded down the dress. It was classic McCarthy style for the red carpet — a classic gown with a special detail to make the look stand out.

To compliment the asymmetrical appearance of the stars on the gown, McCarthy left her hair down, pulling one side of the 'do back to mimic the style. It also showed off her dangling earrings, which served as her only noticeable jewelry of the night. The actor also kept her makeup subdued, opting for a bold red lip to compliment the deep purple hue of her go-to gown.

Just prior to stepping on the red carpet, McCarthy posted a sneak peak of her look on Instagram, joking about the work it takes to get ready for a big night like the Golden Globes.

"It takes a village, a face mask, a hubby and a constellation," she joked in the caption of four photos.

And the final panel shows those special little silver stars, which are certainly fit for a star like McCarthy.

The gorgeous outfit is a sign of a big night for Melissa McCarthy. The actor is up for Best Actress in a Drama for her role in Can You Ever Forgive Me? In the film based on a memoir of the same name, McCarthy stars as Lee Israel, an author who becomes involved in literary forgery to curb her debts. Can You Every Forgive Me?, which was released in mid-October, has received much acclaim, winning critics awards nationwide. McCarthy has been on the receiving end of several of those awards at smaller film festivals and ceremonies.

This nomination is McCarthy's second Golden Globe nomination in her career. Her first was in 2016 for Best Actress in a Comedy or Musical for her leading role in the film Spy. Though she didn't walk away with that award, the buzz around Can You Ever Forgive Me? means McCarthy could walk away with an honor tonight. But even if she doesn't, she has the style — and talent — of a star.

More like this
Kate Had A Solution When Tom Cruise Broke This Royal Rule At The 'Top Gun' Premiere
By Frances Stewart
Anne Hathaway Is Giving Major Princess Mia Vibes On The Cannes Red Carpet
By Sam Ramsden
10 All-Denim Outfits Inspired By Billie Eilish, Bella Hadid, & More
By Allie Fasanella
Megan Thee Stallion Just Brought Back 2004's Favorite Handbag
By Dominique Norman
Get Even More From Bustle — Sign Up For The Newsletter