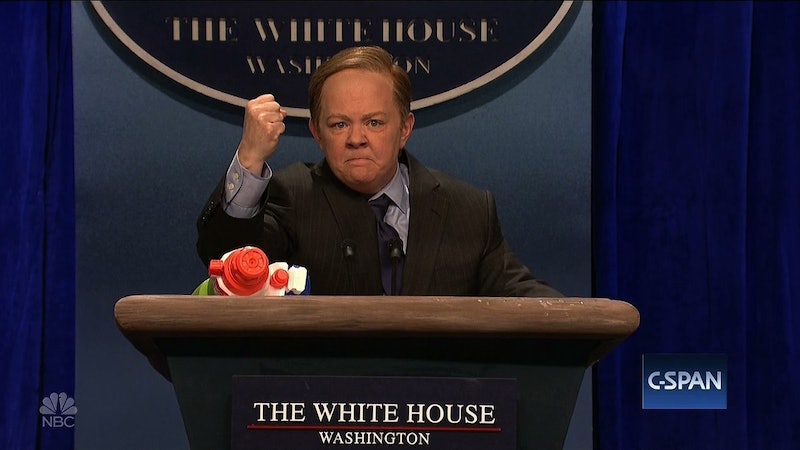 There were two major pop culture events this past weekend. In one, a well-oiled team brutally eviscerated their opponent; in the other, some people played football. Melissa McCarthy as Sean Spicer on Saturday Night Live was one of those instantly-classic moments that the sketch comedy troupe seems to be having in abundance these days. If the results of the 2016 Presidential election were good for anyone, it was definitely the SNL team, who now have endless political fodder to work with. The three months since have proved fruitful for Alec Baldwin as President Trump, Kate McKinnon as Hillary Clinton, Kate McKinnon as Kellyanne Conway, and Kate McKinnon as Betsy DeVos.

Now Oscar-nominee McCarthy has gotten in on the game with her spot-on impersonation of the new White House Press Secretary and Communications Director, giving one of his notoriously unpredictable press conferences. But if you were watching the show from the comfort of your living room, you only experienced part of the fun. A recent photo posted to Instagram by McCarthy shows her and SNL cast member Mikey Day (who also portrays the Grim Reaper — aka Steve Bannon). The photo portrays the pair goofing off while getting into makeup for the upcoming live taping:

Obviously taken before McCarthy donned her Spicer combover wig, the photo (which she captioned "Just two old friends shooting the breeze backstage") is most noteworthy for how good the Ghostbusters actress looks in a bald cap. Based on this evidence, here are 13 further roles I propose that Melissa McCarthy should play in future SNL sketches:

Is it really that big of a stretch to go from playing one of Trump's underlings to playing this chrome domed Death Eater? I don't think so.

Melissa McCarthy in a bald cap would already be a more believable Lex than whatever Jesse Eisenberg was doing in Batman v. Superman.

Just slap on a fake goatee and a porkpie hat, and voilà: she has instantly transformed into The One Who Knocks.

McCarthy as the captain of the Starship Enterprise? Please, NBC: "Make it so."

Although Netflix has effectively erased this 2003 Ben Affleck dud from our collective memory, McCarthy could help give it a comeback.

Of course, men shouldn't get all the follicly-challenged fun. Swinton's casting in Doctor Strange may have been controversial — but there would be nothing controversial about McCarthy's undoubtedly hilarious impersonation.

Remember how everyone freaked out when Darth Vader went on that rampage at the end of Rogue One? Yeah, now picture it again with this guy under the mask.

Draw a squiggly line on McCarthy's forehead, dress Kate McKinnon up like Lucy, throw the pair a football… and let the hilarity ensue.

A little green face paint would go a long way towards turning McCarthy into a real, live Muppet.

Just in time for the new Alien movie hitting theaters this May, McCarthy would be chest-burstingly funny as a foul-mouthed xenomorph.

Surely SNL is going to have some Oscar spoofing to do when the big night rolls around later this month. Paint McCarthy gold and have Emma Stone and Meryl Streep fight over her: instant meme-worthy success!

Speaking of Oscar… A fake beard and a plunging v-neck are all McCarthy would need to recreate this ridiculously random and weirdly sensual dance sequence from Ex Machina.

Hopefully NBC is paying attention, because Bald Melissa McCarthy is the new meme I need in my life.