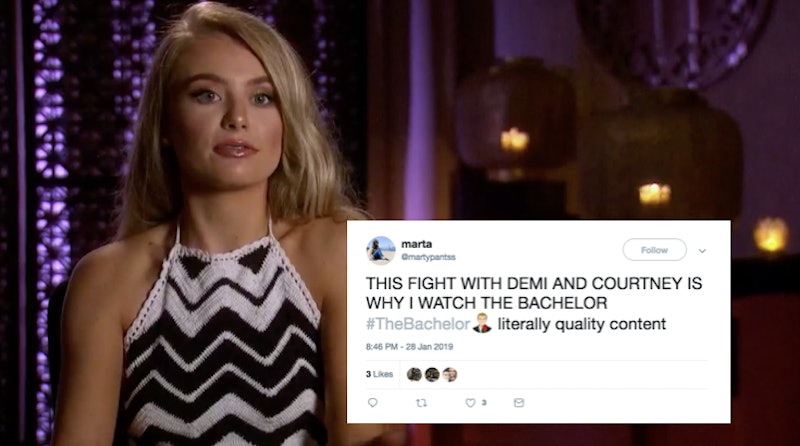 Colton Underwood's Bachelor season is well underway, and as far as beloved contestants go, it seems like fans have spoken. On Monday night's episode, so many people were tweeting about Demi on The Bachelor, especially after she managed to both get emotional about her personal life and end up in a feud with Courtney, all in one episode.

All season long, Demi has been one to watch, mostly because of how willing she is to do just about anything if it means getting Colton's attention — or making the rest of us laugh at home. And Monday night was truly her time to shine, because it showed that she's not willing to back down from what's rightfully hers (Colton, in this instance) without a fight.

To be fair, that's how she's been from the beginning. She straight up stole a smooch from Colton when she got on stage during the first group date of the season, and she created her own "fantasy closet" during a cocktail party so she could score some private time to talk to Colton and give him a massage. She loves to stir the pot, but she also owns it. It's like she knows how to play this reality TV game perfectly, and fans just get to sit back and enjoy.

One of the things that stuck out most about Demi when she was introduced on the season premiere was the fact that her mom was about to be released from federal prison, and when she and Colton had the chance to talk privately after a group date, she filled him in, letting him get to know the more serious side of her. But just moments later, she was able to switch that side of her off and go back to the Demi fans have come to know and love the very second Courtney tried to make Colton think she wasn't sincere. Demi don't play, y'all.

If Anything, She Owns Everything She Says

By the end of the episode, their feud had gotten real, but it didn't slow Demi down for a second. The drama had finally boiled over, and Demi didn't care who knew that she'd filled Colton in on what happened on the group date. Courtney may have tried to call Demi immature because of it, but it didn't seem to phase her one bit; she was ready to remind Courtney that she was the same age as her just about immediately. Let the other women take note: Don't cross Demi unless you're prepared for a fight.

Or Put Get These Women On A Two-On-One Date

And now, it sounds like Demi's jokes about "cutting out the cancer" by informing Colton about the way Courtney acted when he wasn't around paid off, because Courtney was eliminated at the rose ceremony and Demi is safe for yet another week. It's too soon to tell if she and Colton will truly find love with each other, but fans should be glad that we get at least one more week of Demi's special brand of entertainment. In fact, she might just be the best part of The Bachelor this season.