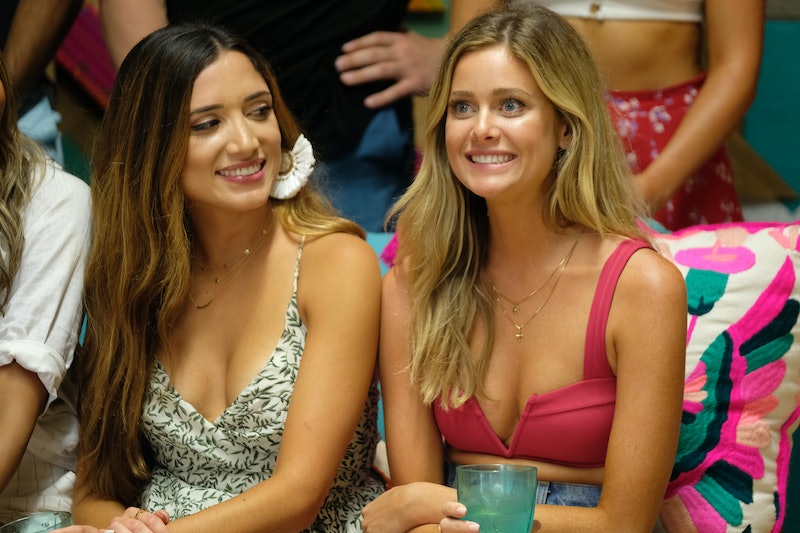 Another week of Bachelor in Paradise means new contestants have arrived at the beach, including Jordan Kimball. And although he didn't have much luck with the post-show outcome of BIP last year with Jenna, it looks like so far, he may strike out again. Hannah G. turned Jordan down on BIP when he offered her his date card, and fans are cheering — even though it's not necessarily because they're rooting against Jordan.

Where we left off last week, Hannah was in a bit of a conundrum. Caught between Dylan, who she hit it off with right away, and Blake, who she also had chemistry with, she was already kind of dating two men — and after Dylan gave her a rose at the rose ceremony, Blake was even more determined to get her to choose to spend time with him instead. Because of all that pressure, Hannah elected to turn Jordan down, even though she told him that if she hadn't been in a situation like this, she would have said yes.

Fortunately, Jordan totally understood, and even said that he respected Hannah for making that tough call. And now, fans have taken to Twitter to celebrate her good decision making. Because not only is she already juggling two guys, but people are really, really rooting for her and Dylan to work out.

Some people were ready to cheer for Hannah for making such a solid decision, because after all, Dylan already looked pretty upset that she was talking to Blake... it would have gotten even worse if Jordan was added into the mix, too.

Others were struggling trying to understand why Hannah would even entertain the idea of going on a date with Jordan when she already had Dylan in the palm of her hand:

Others urged Hannah to stick with Dylan... although plenty of people would disagree about that first part concerning Jordan.

This tweet perfectly illustrated how the scene went down. Hannah made the right call, and Jordan handled the situation perfectly. Well done on all fronts.

Some fans just couldn't get enough of how happy Dylan was when he found out that Hannah wasn't going on a date with Jordan — it did mean positive things for him, right? Or at least that he wouldn't have to share her with yet another man in the running.

And the face Hannah made in this pic was relatable for a lot of fans, who really wanted to see Hannah with Dylan and Dylan only:

Bachelor in Paradise has only just begun, and at this point, anything can happen. But it seems like fans' feet are firmly planted in the Hannah G. and Dylan camp, and it doesn't look like that's going to change anytime soon. Let's just hope she makes a decision, because her love triangle is starting to get a bit contentious.

Then again, this is paradise we're talking about — isn't that drama why we're all watching? You do you, Hannah.