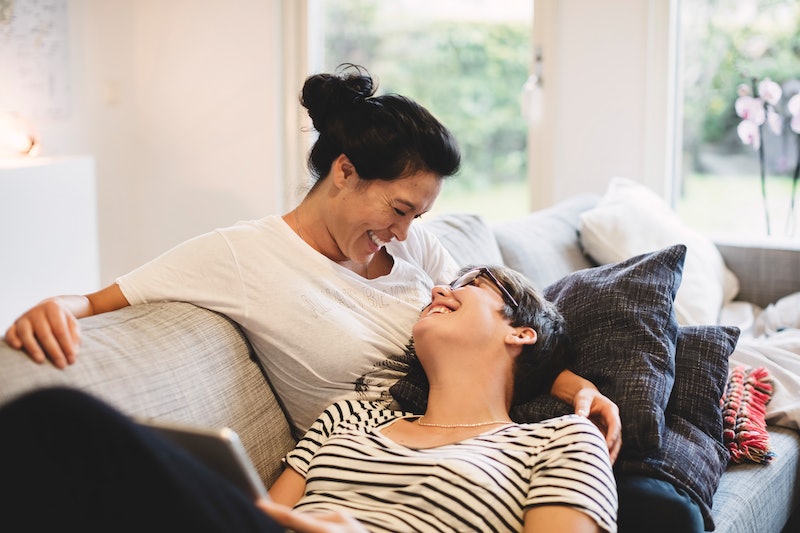 In any intimate, long-term relationship, it's necessary at some point or another to have difficult conversations. It's only natural that sometimes, those tough talks can become arguments. Those arguments may well come up even more as people try to get through the holiday season. With all the added stress of travel and family, conventional relationship advice might not be applicable to everyone when it comes to figuring out how to most effectively resolve your relationship's most pressing issues. Surely, actively listening to your partner is key, but it can be even more difficult to pay full attention when so much else is going on.

According to a recent study, you're more likely to be able to resolve disagreements effectively if you have a good memory, Scientific American reported. As relationship issues might flair up with the holiday season, however, it's important to remember that conventional relationship advice may not work for people who are affected by trauma. Having a solid memory might be great for your relationship, especially during potentially rocky winter months, but this finding might seem more than a little demoralizing for folks who experience memory loss, especially stemming from trauma.

The study, published in the Journal of Experimental Psychology, found that the success of an intimate relationship is often shaped by a person's ability to process and recall details of what their partner has said in the past. The study found that the greater the ability of participants to proactively remember things their partner had told them, the more effectively people could solve relationship problems.

However, not everyone has the same ability to remember such detail. Dr. Sheila Rauch, the clinical director of the Emory University Veterans Program, says that vulnerability is an important part of any relationship. Folks who struggle with opening up in general might have difficulty communicating effectively and therefore, resolving arguments well. This struggle might be especially tough for people with a history of trauma, Dr. Rauch says. For example, relationships may be impacted by past traumatic brain injuries that can cause current memory loss. And while people with more psychological forms of trauma such as Post-Traumatic Stress Disorder (PTSD) might not experience current memory loss, difficulty remembering past events due to trauma may also impact current relationships.

Dr. Rauch tells Bustle that people living with PTSD might experience difficulties being open with their partners because they "may not remember pieces of the [past] trauma." The vulnerability of being unable to access such big memories "can be upsetting, as [people] may worry about what happened in the part of the memory they do not recall." This worry can exacerbate current PTSD symptoms. According to the Anxiety and Depression Association of America, one of the common symptoms of PTSD is difficulty concentrating, which can lead to people having a hard time communicating effectively with their partner.

If you have a history of trauma and resulting difficulty concentrating, it might be especially difficult to fully engage in current conversations about relationship issues. In turn, this can leave their partners feeling unheard or invalidated, as demonstrated in the Journal of Experimental Psychology study. This is a big issue, because the study found that actively remembering and engaging with conversations about conflict is helpful for lasting relationships.

However, a lack of ability to engage with and immediately recall past conversations with your partner may be part of your brain's wiring when you're living with a history of trauma. "People with PTSD often withdraw from previous activities and relationships due to avoidance," Dr. Rach tells Bustle. This withdrawal can include dissociation, which she says can create a sense of disconnect from yourself and the things happening around you.

Dissociation, when it occurs during arguments that might trigger someone's PTSD, can impact people's ability to maintain awareness of what's actually going on around them. According to a 2017 study published in the journal Neuropsychologia, people with PTSD who have experiences of dissociation are more likely than people without PTSD to have memory recall errors. These errors, in turn, can impact their ability to retain what their partner might say to them during these times and have the inadvertent result of making their partner feel unheard.

To help all parties in a relationship get their needs met, it's important to ask for help, Dr. Rauch says. "Talk with your support people about the issues," she tells Bustle. "Social support is one of the most robust predictors of positive function following trauma." In addition to seeking help from those closest to you, Dr. Rauch says that professional treatment is also crucial. "Treatment for PTSD is effective and memory improvements can occur as PTSD symptoms are reduced or remit," she tells Bustle. According to Dr. Rauch, Prolonged Exposure and Cognitive Behavior Therapy (CBT), as well as some prescribed medications and other trauma-sensitive forms of therapy, can be particularly helpful for people living with PTSD. These forms of assistance are all important in supporting you and your relationship, because all people in the relationship (including you) deserve to feel heard, understood, and cared for.

More like this
How Ovulation Affects Your Sense Of Smell, Libido, & More
By JR Thorpe and Lexi Inks
I Spent 2 Years Trying TikTok’s Dating Advice
By Kailynn Johnson
The 3 Zodiac Signs Most Likely To Get Married Later In Life
By Kristine Fellizar
4 Zodiac Signs That Will Take Forever To Admit They Like You
By Kristine Fellizar
Get Even More From Bustle — Sign Up For The Newsletter
From hair trends to relationship advice, our daily newsletter has everything you need to sound like a person who’s on TikTok, even if you aren’t.