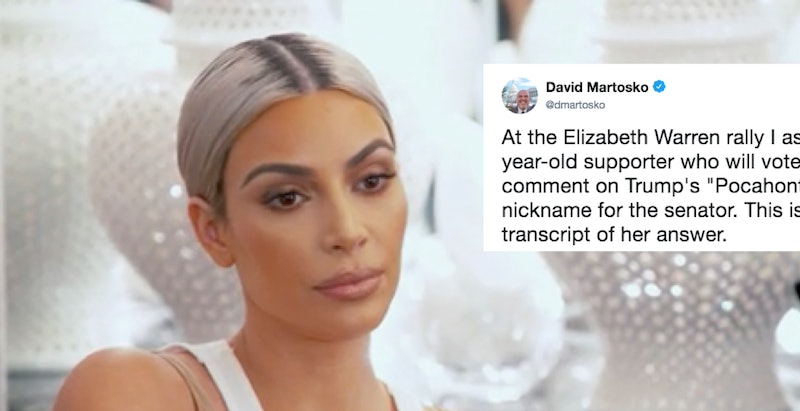 If you've never heard of the terms "vocal fry," "upspeak," or "discourse markers," you've probably never delved into the world of policing the way women speak. All of the aforementioned techniques are supposedly something that only women do when opening their mouths. And it's earned them a lot of criticism in the past few years. But a recent Twitter backlash has shown that more and more women are becoming aware of this policing, and are shutting down anyone who dares to knock the tone of their voice or the language they use.

Earlier this week, the political editor of the U.S. Daily Mail, David Martsoko, decided to tweet his experience of speaking to a young woman at a political rally for presidential candidate Elizabeth Warren. "I asked a 17-year-old supporter who will vote next year to comment on Trump's 'Pocahontas' nickname for the senator. This is a verbatim transcript of her answer," Martsoko wrote.

The screenshot of the 17-year-old's quote showed an answer filled with the word "like" (and one "um"). Whatever his intentions were with this tweet, they spectacularly backfired.

Twitter users replied in droves, condemning the journalist for his actions. Some pointed out that the President of the United States (who is media trained) speaks in a similar manner. One person even provided a transcript of an interview featuring Martsoko where he uses a number of filler words.

The anonymous 17-year-old's choice of language is something that peppers almost every natural conversation between human beings — both male and female. Who hasn't used the word "like" when trying to articulate a point? Who hasn't stuttered an "um" or "er" when put on the spot?

But this 17 year old is not the only woman to face such scrutiny. Female politicians and public speakers are faced with a barrage of complaints about their "annoying" voice and word usage. As are female celebrities such as Kim Kardashian, Paris Hilton, Britney Spears, and Katy Perry. Even non-famous women are told they use "just" and "sorry" too much.

I have certainly felt a pressure to alter the way I speak for fear of not being taken seriously. I'd like to think my job has given me some skill in public speaking, but I still chastise myself when the odd "um" crops into an interview or when an "I mean" blurts out of my mouth on a live panel. It appears in the written form too. My emails are full of "just wondering" and "sorry to bother you"-type phrases.

There's a theory that women are more likely to use so-called vocal tics. This may be true. But, according to Dr. Mercedes Durham, reader of sociolinguistics at Cardiff University, there's probably a good reason for it:

"Fillers are a way to structure your own thoughts but also an opportunity to let the other person keep on track," she told Dazed. "So it could actually be that women are more sensitive to the general needs of the conversation, and are giving the person listening more of a chance to pick up on what’s being said."

It's also a way to show empathy, Robin Lakoff, expert on language and gender studies, told Business Insider. "If there weren't humans around who knew how to be empathic, we would have probably all killed each other off years ago," she added.

Dissecting how a woman formats her sentences a form of suppression. If women become nervous about the way they speak, they're less likely to speak at all. But it's important to know that you don't need to change yourself to please others. You don't need to apologise for a lack of directness, for struggling to form a perfectly articulate speech, or for using the word "like" 10 times. What you do need to do is keep speaking up and shaming those who try to tear you — or anyone else — down.

After all, language is about communication. And if the experts are correct, women may well be the ones who are better at it.