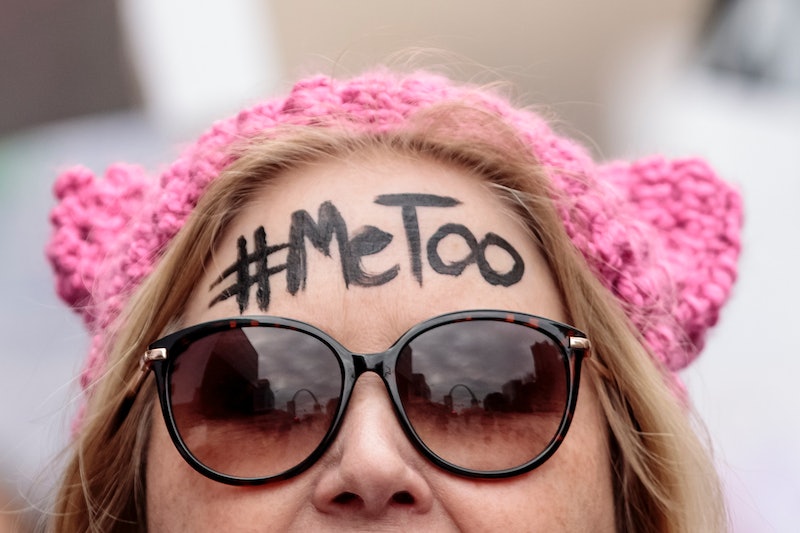 While many conversations are in private — woman-to-woman, in group texts, or over a glass of wine — many of them are in the public sphere. The internet and social media have given us a way to spread our stories faster and further than ever in human history. Women are raging on Twitter; crying on Instagram stories; angry-posting articles about rape statistics on Facebook. We’re collectively, publicly angry.

And guys aren’t really sure what to do about it. A friend recently reached out and asked me if I’d been getting messages from men saying things like “sorry” or apologizing “for all men.” While I hadn’t had that experience, a few men have reached out since this particularly rough round of beat-women-down and set-back-our-civil-rights and national gaslighting has started. Some were clumsy. Some were irritating. Some nailed the approach right on the head.

And all were well-intentioned.

So here’s how to reach out — and also how not — to a woman in your life during a moment of collective, gender-based trauma.

How Not To Reach Out

First of all, if a guy wants to reach out and the only thing he can think of to say is “sorry?” or he wants to give a vague, general apology? He shouldn't. He should take a minute to think about what’s to be gained by that message. Is he offering her anything? Is he actually helping?

Not only do general and vague apologies — for the whole male gender, not for specific actions he has taken, which is another conversation — not benefit the woman he's talking to, but it may actually cost her. That’s because she’s now stuck in this place of having to deal with his feelings on top of everything else. He's asking her to do to the emotional labor of not only figuring out how to respond to his apology, but also reassuring him about his bad feelings.

This whole dynamic — feeling bad and turning to a woman to help work through it — is a product of how we’re socialized based on our gender. As women, we’re taught to take care of others, men in particular. We’re taught to make sure they're always comfortable and to help them feel better when you feel bad. We carry the water of emotions for the two largest genders in the human race.

Men, on the other hand, are socialized to not process their own emotions — or, in many cases, even feel them. They're not taught to share or talk it out or be vulnerable with other men. So when those negative emotions crop up — as they do and will, forever, because they're human — they turn to women to take care of them. As a result of this two-sided coin of gender socialization, women end up carrying the burden not only of our own emotions, but also of theirs.

But just because that’s the way we’ve been socialized doesn’t mean we have to behave that way. So before a guy follows that impulse to reach out to a woman in his life because he's feeling some bad feelings, it's important for him to ask himself: Is it really for her? Or is it actually for me?

How To Reach Out

That’s not to say the impulse to reach out is bad or that no men should ever talk to any women again. Instead, it's time to rework the approach.

Rather than reaching out with a vague feeling of shame or regret “for the entire male gender”, he can reach out and offer something. He should think about what would make her feel a little better in this sh*tty, sh*tty moment we’re living in. Maybe it’s a funny dog meme. Maybe it’s a donation to Planned Parenthood or to a group that supports women candidates, like Emily’s List. Maybe it’s a $20 Venmo for a glass of wine or a beer or two. What's specific to her as a human being?

For example, one of my older brothers sent me a link to a Spotify track this week with the message “Random dance moment. I thought you could use it after the shitty past week.” Random dance moments are a thing we’ve been doing since we were kids. Whenever we’d run into each other, like at the house or at school, we’d start just randomly dancing. So him reaching out with that track — two tracks, actually — and trying to offer me a little moment of joy was exactly right. He acknowledged the trauma, gave me a tiny gift, and didn’t ask me to take care of him in any way.

What Women Can Do When Guys Reach Out

If men are reaching out to you in ways that you don’t like, or you’re just like, “What am supposed to do with this?”, there are things you can do, too.

You can also ask yourself: What do I want from the entire male gender? That might sound grandiose, but I’m serious. When my dad — who is a wealthy, white, cishet dude with liberal politics — called me to talk about the nomination and said he was upset because he wanted to do something, I told him to donate money to Planned Parenthood and to organizations that support women candidates. As a rich white guy, he has the privilege and the financial resources to contribute in a very real, monetary way. And I felt absolutely entitled to ask him to do that. (And, turns out, he actually was already doing that, so props to Dad.)

But even if the guy reaching out is a struggling millennial, he still has privileges that you, as a woman, don’t. So ask him to utilize that privilege in whatever way makes sense for you and for him. If he’s feeling bad about Kavanaugh and about the state of gender politics; if he’s hurting because he sees the women around him hurting so much; ask him to redirect that pain. Ask him to speak up when other men say sexist things. Donate money. Pick up some of the housework, if they have a female partner. VOTE.

We’ve been dealing with this garbage for centuries. It’s time for men to take responsibility for it, too.