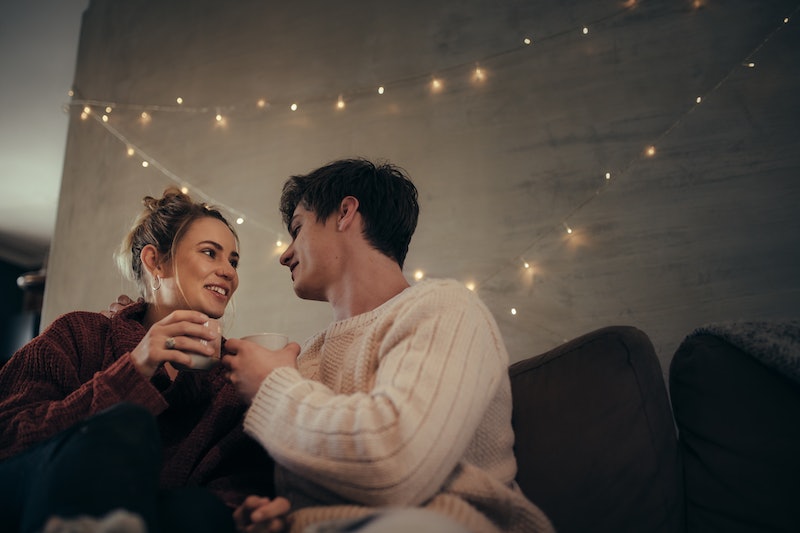 Love is in the air... JK, that's just the sickly sweet aroma of cuffing season being right around the corner. As the weather gets gloomier and the chill of the impending long n' lonely winter season settles in, even the most diehard of singles can get a case of the cuffing season hype — in other words, they will suddenly find themselves willing to trade in their wild n' free nights on the town for a monogamous cuddle mate who'll stay inside with them, warm under the covers. Until springtime hits, anyway.

But alas, we've got bigger seasonal hoops to jump through this fall, as Mercury retrograde fall 2019 just so happens to begin on Halloween, Oct. 31, marking the planet's final retrograde period of the year — and kicking off juuuuust as the season of cuffing begins, too.

While Venus and Mars are the major love and sex planets, Mercury has an influence over relationships too, as it's the ruler of communication and timing. This means that during one of the planet's regular and often-dreaded retrograde periods, we'll be way more likely to mess up on plans, show up late, fail to properly communicate our feelings, or find our tech devices failing on us (think texts not going through or being sent to the wrong person) — all of which can lead to arguments, confusion, and misunderstandings in the love department.

But this transit will be hitting everyone's astrological chart a little bit differently, so just because we're facing a pesky Mercury retrograde period doesn't mean that an active autumn love life is off the table for every sign. While, yes, there are a few signs who may want to avoid pouring themselves into any new romantic endeavor whatsoever, this upcoming Mercury retrograde won't affect cuffing season for some zodiac signs, so they'll be able to carry on with their love lives as usual. That's not to say that the retrograde won't affect their romantic prospects at all — no one can escape this retrograde's effects, especially given that it's in the emotional sign of Scorpio and will be bringing all sorts of private matters to the surface! But cuffing season will carry on strong for these three zodiac signs, and they will just have to roll with the retrograde punches as they navigate it. Astrologer Lisa Stardust spoke with Bustle to give us her professional astrological opinion on the matter, so read on to find out where you stand.

You're perfectly content to map out a gorgeously relaxing next few months for yourself — all you need is your perfectly curated Netflix queue, some good books, and your nicest sheets and candles to spruce up your space. But do you go at it alone? "You’re conflicted whether to commit 100% or play it solo right now," explains Stardust. But this Mercury retrograde period is actually likely to wash an ex-lover up on your shores, so if you're single, you may find yourself saying yes. "You’re more apt to reconnect and keep warm with an ex this cuffing season."

Mercury retrograde periods have a tendency to bring up issues from our past, especially those that have been unresolved — and in the case of your love life, you may find this to be true, Cancer. "A former crush will resurface," shares Stardust, "but you may experience a tug-of-war with your romantic interest." While there may be some perks and even some growth experiences to be gained through a reunion with this shadow of your past, you'll probably find that you both have trouble committing. Don't expect it to last, but at least enjoy the cuffing season.

Mercury is retrograde through your sign this season, Scorpio, meaning that you may be feeling its effects more than anyone. While it certainly isn't putting your love life on hold, it is making it extra difficult to figure out what you want, as your emotions feel intensely raw and vulnerable. "You’re confused by who you want to partner with, as you may have a few options," explains Stardust. No one can make a decision here but you — just remember to proceed with honesty and know that retrograde's can cloud our judgment, so don't commit too hard just yet.

More like this
The 4 Zodiac Signs Most Likely To Chase You, According To An Astrologer
By Kristine Fellizar
The 3 Zodiac Signs Most Likely To Get Married Later In Life
By Kristine Fellizar
Here’s Your Horoscope For Unconventional Aquarius Season
By Brittany Beringer
These 4 Zodiac Signs Make The Best Bridesmaids
By Nina Kahn
Get Even More From Bustle — Sign Up For The Newsletter
From hair trends to relationship advice, our daily newsletter has everything you need to sound like a person who’s on TikTok, even if you aren’t.