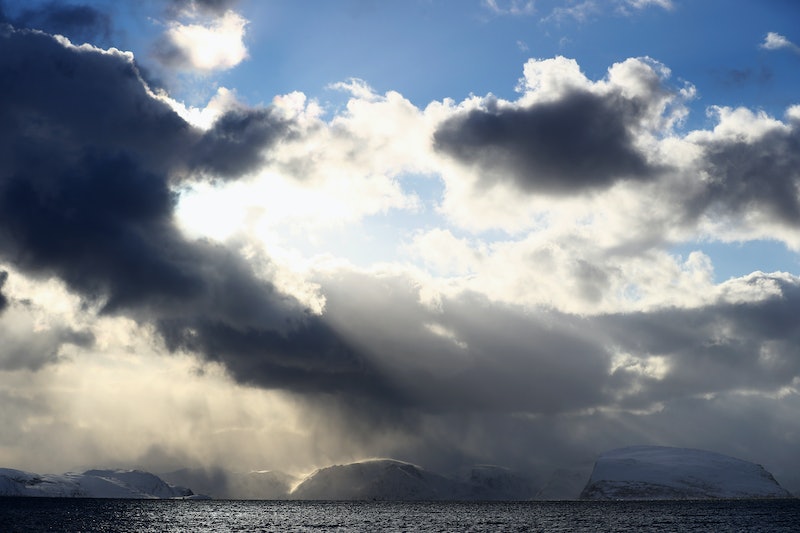 Welcome to 2018, the year where almost every planet decided to take a retrograde and turn our lives into metaphorical piles of dust and ash. Astrologically, politically, and otherwise, this year has been one for the books — like, the kind of books you hide on the back of the shelf and try to forget you own. And because 2018 is literally still not done with its reign of Rx terror, Mercury retrograde is happening during Thanksgiving. Yes, friends, I wouldn't lie to you: The planet that rules communication, travel, tech, and more is going to be retrograde during the busiest travel day of the year (not to mention during every conversation you have at the Thanksgiving dinner table). *Intense deep breaths* BUT RETROGRADES ARE JUST TRYING TO FORCE US TO GO INWARD AND LEARN LESSONS, OK? OK. Whew. Now that you've gone through the multiple stages of grief and hopefully entered the "acceptance" phase, we can move forward and discuss what this means for all of us Earth babies, and exactly how Mercury retrograde during Thanksgiving will affect us.

Mercury, our solar system's planet of communication (and the most infamous of the bunch as far as retrogrades are concerned), enters its retrograde periods approximately three to four times per year, during which the planet appears to move backward instead of forward for several weeks before going direct again (i.e. moving forward again, as usual). Mercury's retrogrades are notorious because they happen pretty frequently (at least as compared to other planets' cycles), and also because of the havoc these periods wreak in our day-to-day. Astrologically, a planet's retrograde periods cast a shadow of confusion, snags, and errors over the areas of life that planet rules. In Mercury's case, that's things like communication (by phone, mail, or in person), traveling, scheduling, and the transfer of data. In a society where cell phones, Google calendars, and jam-packed schedules rule supreme, you can bet it makes for some not-so-nifty snags.

That all said, it's fully impossible to ignore the glaring fact that Thanksgiving is taking place right smack in the middle of Mercury's retrograde period. As if holidays aren't stressful enough! This Mercury retrograde, which marks the last of 2018's hellish run, begins on Nov. 16 in the sign of Sagittarius. The fiery sign of Sag is naturally a world-travelin', high-thinkin', very outspoken type, but with Mercury headed backward, things are fully topsy-turvy. "Mercury retrograde brings communication and technology breakdowns, nervous anxiety, travel delays and lost items," explains Astrology King on its site. Everything we needed during Thanksgiving, right folks?

Travel issues are par for the course during Mercury Rx, but given that Thanksgiving week marks one of the busiest travel times of the year, prepare yourself for the unexpected if you're headed out of town. It's going to be necessary to triple check your flight times, leave earlier than you think you need to (as traffic, delays, and other snags are likely), and expect delays or miscommunications. I guess on the bright side, if you miss your flights altogether, you can always stay home and have an impromptu Friendsgiving instead?

Assuming you eventually make it to your Thanksgiving destination, be aware of the fact that miscommunications are likely — and with the retrograde happening in Sagittarius (plus certain planetary aspects that are negatively affecting this transit), there may be a particular edge to these potential disagreements. "[T]here [will] be a clash of different cultures," described Find Your Fate on its site. TBH, there is already a clash of cultures at most Thanksgiving tables given that not everyone's families share the same views on issues that matter. There's a reason blowout holiday arguments are a thing. So despite the fact that 2018 has been nothing short of a political hellscape and we all just voted in the midterms, you'll want to really think before you speak — as the likelihood of your emotions getting the best of you is likely. "You may feel very opinionated on a particular subject and care little what others think," explained Astrology King. "However, this is not a good time to be preaching to others and telling how they should think or act. Your emotional biases can influence your thoughts and intellectual reasoning." This means think ahead about how to handle things if Uncle what's-his-face says something seriously offensive, and do your best to not completely fly off the handle. I mean, it'll probably happen anyway, but we should at least try.

All the same rules apply to those of you who may be partaking in the classic night-before-Thanksgiving hometown bar crawls: Think before you speak, and expect the unexpected. "[E]xpect to dwell on things, reminisce about the past, or unexpectedly meet up with people from your past," wrote Astrology King. But be aware: "While the Mercury retrograde period might be good for flicking through old photo albums, it is generally considered more of a nuisance than a benefit." Prepare yourself for the emotional ramifications of feeling nostalgic AF, and know that you may run into some hometown ghosts who induce some serious feelings in that lil' retrograde-heavy heart of yours.

Like it or not, Mercury retrograde will be in full force during the whole week of Thanksgiving, and as described by AstroStyle, "The truth will inevitably come boiling to the surface during this phase, as mysteries are revealed and skeletons are forced out of the closet." Are we happy about this? No. Are we slightly holding a grudge against the cosmos? Absolutely. But we can handle it with a little extra caution, consciousness, and probably a bag full of protective crystals that never leaves our person until this dang planet finally goes direct again on Dec. 6. Now let's party like it's the last retrograde of 2018!