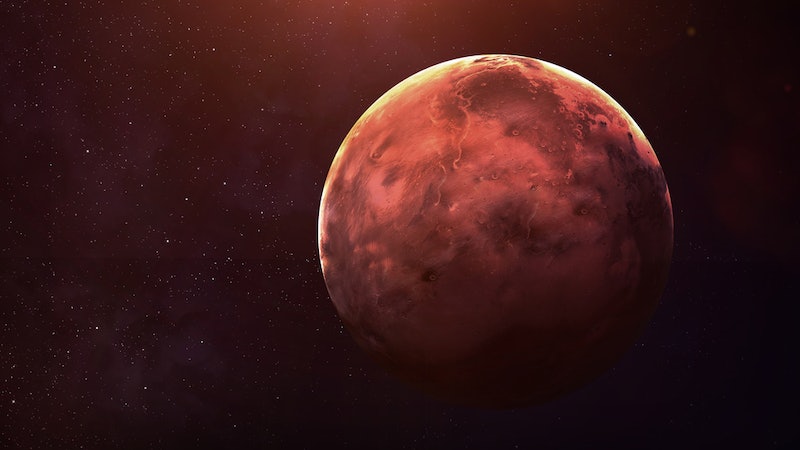 In 2018, almost single planet in the galaxy, aside from Earth, went retrograde. In other words, it was a very busy and eventful year. Luckily, 2019 is going to be a bit different, as only six planets go retrograde this year — and there's even more good news: we'll have a break for the first few months of the year before the first retrograde of 2019 is sprung upon us, something that doesn't happen very often. Although Uranus will be retrograde for until Jan. 5, it's going direct after that, and then we'll be retrograde-free for most of the winter.

However, once we do get hit with a retrograde, it's going to be a big one. Mercury retrograde will be the first of the year, and it's going to happen on Mar. 5. It's only fitting, since it happened at the end of 2018 as well! This is also only the beginning for Mercury retrograde: after the Mar. 5, the planet will go retrograde two more times throughout the year. That means it's time to prepare now so you really know what to expect.

The first Mercury retrograde of the year is, thankfully, a short one. It will last for less than a month, going direct on Mar. 28. After that, we have another break until Jul. 7, and then the longest Mercury retrograde of 2019 happens on Oct. 31. This year, you can also expect to experience retrograde cycles for Jupiter on Apr. 10, Pluto on Apr. 24, Saturn on Apr. 30, Neptune on Jun. 21, and Uranus on Jan. 6. Part of getting ready for these is knowing what to expect, especially when it comes to Mercury retrograde, which affects us here on Earth most of all.

When Mercury goes retrograde, it can mess with the things Mercury rules, according to astrology: communication, travel, and data. You know those weeks where nothing seems to be going right, no matter how hard you try? Mercury retrograde could be to blame. This time period can make communication seem nearly impossible, which can lead to so many issues: it can cause people to misunderstand each other more, get in disagreements, or say the wrong thing. Cafe Astrology says that Mercury rules our "lower mind," which controls how we perceive and interpret information we receive, and how we relay it to others. This makes it a lot harder for us to say what we want to say, and to really get a grasp on what someone else is saying to us.

It's not just communication that goes haywire. This planet also rules buying and selling, listening, formal contracts, documents, travel, and mail, among others. All of these things will be negatively affected, including any kind of decision-making you have going on. Mercury retrograde is not the time to sign a contract, make a big decision (on something that will seriously affect your life), spend a lot of money on a huge purchase (it's not the best time to get a new car), or start something new. No matter what zodiac sign you are, you're more likely to run into various delays and challenges that will make things more tough than they need to be.

The first Mercury retrograde will be happening in the sign of Pisces, and as Horoscopes Guru wrote, "It is a period when we can find out information or start relationships which can change the course of our lives. Jobs can turn out to be more stressful during this time, and the everyday work more tiring sometimes." And because Pisces is a Water sign, AstroSage reported it could also lead to "turmoil of the emotions." This sounds pretty par for the course for Mercury retrograde.

But while this tumultuous period can definitely have a negative effect on everyone, it's not all bad. It's also a really important time to look back on the past and reflect, and to learn from your mistakes. You may not want to make new decisions during this time, but you will want to reflect on old ones. You can actually take advantage of Mercury retrograde by using it as a time to re-organize and have some revelations. It's a time of heightened inner awareness, so it's a good time to meditate, refresh your knowledge on something, and review the past.

While it's easy to blame everything negative on Mercury retrograde, you'll be fine as long as you know how to handle it. This is a time to slow down and think more carefully before you speak or make big decisions — that's something we could all use from time to time.

More like this
October's Astrology Includes Mars Retrograde & A Solar Eclipse
By Nina Kahn
Angel Number 333 Is All About Self-Love & Alignment
By Brittany Beringer and Kristine Fellizar
The Spiritual Meaning Of Angel Number 000, Explained
By Kristine Fellizar
Here’s Your Daily Horoscope For September 29, 2022
By Mecca Woods
Get Even More From Bustle — Sign Up For The Newsletter