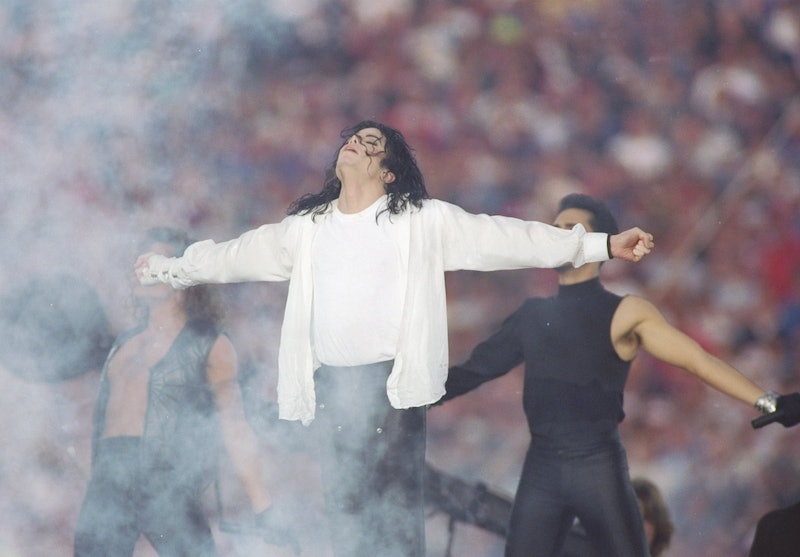 Michael Jackson's estate appeared to respond to HBO's controversial new documentary, Leaving Neverland, on Sunday, March 3, the night of its premiere. The estate released Michael Jackson concert footage while Part 1 of the docuseries, in which two men accuse Jackson of molesting them as children, was airing. And it doesn't seem like the timing is a coincidence.

Sunday night around 8:00 p.m. ET, the Michael Jackson estate uploaded the singer's Live in Bucharest special, originally filmed during the performers 1992 Dangerous World Tour, to his official YouTube channel. Though the concert special was already available online for purchase, it is now currently available to stream free of charge for a "limited time," according to the estate's tweet. The singer's Live at Wembley special, filmed at his 1988 Bad tour, will be uploaded on Monday night, March 4, when Part 2 of Leaving Neverland airs on HBO, presumably also free of charge.

Jackson's family has already spoken out against the documentary, so it's not surprising to that they might attempt to release footage of the singer in an attempt to distract from the documentary's U.S. television premiere. In a statement provided to Variety in January, the Jackson estate called Leaving Neverland a "public lynching." The statement started out,

"Michael Jackson is our brother and son. We are furious that the media, who without a shred of proof or single piece of physical evidence, chose to believe the word of two admitted liars over the word of hundreds of families and friends around the world who spent time with Michael, many at Neverland, and experienced his legendary kindness and global generosity. We are proud of what Michael Jackson stands for."

The Jackson estate has also sued HBO over the documentary, arguing that Leaving Neverland violates a "non-disparagement clause" that HBO had with Jackson, Entertainment Weekly reported in February. According to the lawsuit, the damages "could exceed $100 million" if the estate is successful, EW noted. HBO responded in a statement, saying that they would still be airing the documentary, according to The Guardian. "This will allow everyone the opportunity to assess the film and the claims in it for themselves," the statement read.

Leaving Neverland focuses on the accounts of two men, Wade Robson and James Safechuck who claim that Jackson sexually abused them when they were boys in the late '80s to early '90s. Both men spent time at Neverland Ranch when they were children, and claimed that they were abused there.

In the Jackson estate's original statement, the family noted that Michael Jackson was found innocent during his 2005 trial which also accused him of molesting a minor. During that trial, Robson and Safechuck claimed publicly that Jackson hadn't molested them, as noted by Variety. And the Jackson estate's statement about Leaving Neverland called Robson and Safechuck "two admitted liars."

In 2013, Robson revised his original claims, publicly alleging that Jackson had abused him as a child, according to Slate. Robson sued the singer's estate, but the suit was dismissed due to the statute of limitations. Safechuck followed in 2014, similarly attempting to file a lawsuit against the Jackson estate, according to Slate, but his lawsuit was also dismissed.

Now, years later, the two men are speaking out once more, and it sounds like they hope the docuseries will resonate with sexual abuse survivors, even if it doesn't change some fans' minds about Jackson. As Robson told Rolling Stone a few days before Leaving Neverland's HBO premiere:

"Everybody makes up their own mind about everything, and all of us can only accept things when we're ready to... I guess if I have any hope, it's just that the film continues and expands the conversation. You just can't shut down people without listening. We have to talk about the scary and the nasty stuff. That's the only way it's going to change."

More like this
Is Dua Lipa Dating Trevor Noah? New Photos Show Them Kissing & Hugging
By Brian Anthony Hernandez and Martha Sorren
Everything To Know About Taylor Swift’s 10th Studio Album, 'Midnights'
By Grace Wehniainen and Jake Viswanath
Twitter Is Freaking Out Over Rihanna’s 2023 Super Bowl Halftime Show Announcement
By Stephanie Topacio Long
Jason Derulo Is Launching A New Singing Show In The UK
By Maxine Harrison
Get Even More From Bustle — Sign Up For The Newsletter