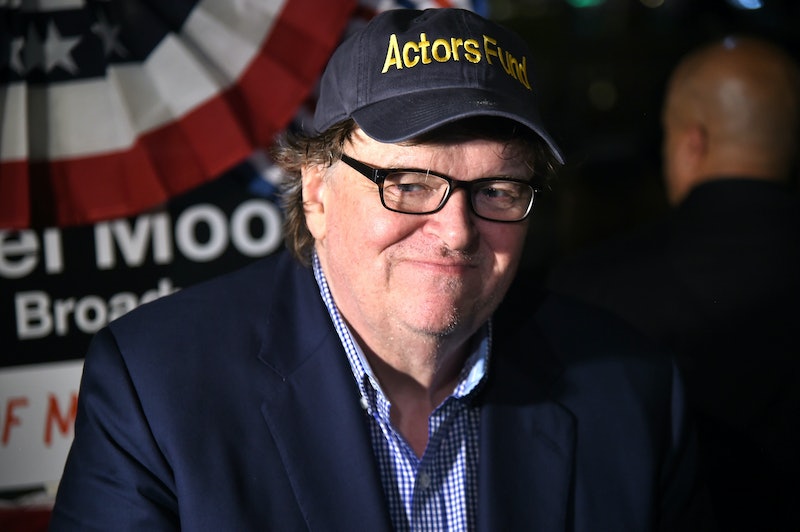 Following a showing of Michael Moore's Broadway play on Tuesday, the audience was invited to head over to Trump Tower (where President Donald Trump is currently staying) with Moore and Mark Ruffalo (via bus) to protest Trump's response to the violence in Charlottesville, Virginia over the weekend. The "little field trip" as Ruffalo called it, brought 200 of the guests of Moore's one-man show uptown for the demonstration and candlelight vigil for Heather Heyer, who was killed counter-protesting the alt-right "Unite the Right" rally on Saturday, according to The Hollywood Reporter.

Ruffalo was the latest progressive figure (joining the ranks of Bryan Cranston, Keith Olbermann, Maxine Waters, and Gloria Steinem) to appear as a guest at Moore's show. And, considering Trump is actually home and had just made some particularly troubling off-the-cuff comments about Charlottesville, they decided to urge their crowd to head over to the rally and take some action. Per The Hollywood Reporter, Ruffalo said:

It was very disconcerting ... Basically our president today backed up and supported the Nazi, alt-right, KKK, and equated the left to the Nazis, as if there’s two sides. Back when we fought World War II and there were two sides, it was the Nazis and the rest of the world trying to stop them, and that’s where we find ourselves in America today, sadly. But we have a president that instead of standing up against them, actually [is] making excuses for them. I’m actually really heartbroken, since this death and this violence and this whole new political paradigm that we find ourselves in where Nazis are actually out in the open without their hoods and without hiding, killing Americans — I’m really sad. I’m really scared.

Moore had hinted back in May that "impromptu excursions" post-show weren't out of the question given the proximity of Broadway to Trump Tower. As The Hollywood Reporter noted, he said at the time that folks could "do the math" and assume there'd be some kind of action.

However, this first excursion was particularly meaningful following the events in Charlottesville. Moore, who usually unpacks weekly headlines at the start of each show, anchored the expected jokes with a devastating emotional center at the realities of an "agenda" that doesn't renounce or condemn white nationalism.

"None of us can remember when an American president defended white nationalists," Moore said. "After it was over, I had tears in my eyes, because it really showed me that this guy is not just crazy — he has an agenda, and he's mad that he said what they made him say, and he walked it all back."

And, Ruffalo, who has always had a way with words in tough times, offered up some really good advice: "If you're losing hope, you're not doing enough."

Considering Moore's track history — and the high-profile activists and celebrities he has on his side — it's safe to assume that this isn't the last field trip he'll be taking.

More like this
'The Capture' Is Finally Back – & S2 Looks Tense AF
By Sophie McEvoy and El Hunt
The Lionesses Are Calling For Equal Access To Football In Schools
By Sophie McEvoy
Christina Aguilera Took A Powerful Stand At Brighton Pride
By Sam Ramsden
Are John Legend & Kanye West Still Friends? The Singer’s Latest Update Is Candid
By Brad Witter
Get Even More From Bustle — Sign Up For The Newsletter