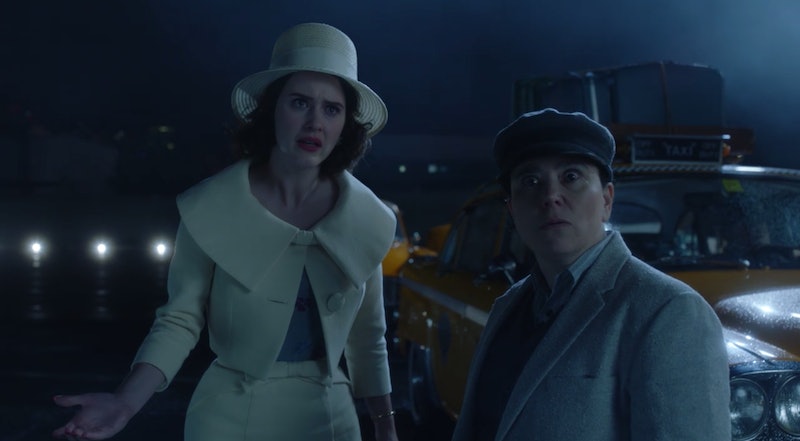 Spoilers ahead for The Marvelous Mrs. Maisel Season 3. Though Midge finds great success while on the road with Shy Baldwin and even becomes his closest confidant, The Marvelous Mrs. Maisel Season 3 ultimately ends with sudden heartbreak: at a show in Harlem, Midge makes too many jokes that hint at Shy's sexuality, and as a result, he cancels his contract with her and boots her from the tour. Given the way Midge tends to glide through life, it's possible she'll find a way to resolve things and tour with Shy again — but honestly, after all that, does she even deserve to?

It all begins when Midge goes to meet Moms Mabley, a real comic, backstage at Shy's show in Harlem. Midge is giddy to meet a legend, but Moms and her agent are standoffish, since Moms got bumped from opening for Shy by Midge — a shuffle that Midge didn't even realize happened, but one that she's deeply embarrassed about regardless. Midge frets to Reggie that perhaps she shouldn't go on, that this isn't "really the crowd" for her, and that it's disrespectful to try and follow Moms, in Harlem of all places.

Midge is certainly not wrong, but Reggie forces her to go on anyway. "Get up there and talk about Shy," he suggests. "Shy is like family to these people. They want to hear stories about him ... here in Harlem, his hometown, they'll eat it up."

So Midge does exactly that, but there's a major problem: Reggie isn't aware that Midge was there to comfort Shy in Florida, when a man he brought home the night prior beat him up, and that she now knows that he's gay. When Reggie tells Midge to talk about Shy, he doesn't realize she knows all of who Shy is.

Meanwhile Midge, despite trying to be a good-natured ally and friend, isn't fully aware of the privilege she has, and that she grew up in a relatively insular, religious community. She does genuinely care about Shy, but doesn't realize that joking about his "Judy Garland shoes," makeup, extensive wardrobe, and the fact that they first met in the ladies' room all hint at damaging stereotypes about the presumed femininity of gay men. Midge may think that calling him a "pretty, dainty, elegant thing" who is gorgeous enough to "play Romeo and Juliet" is a compliment, but she's in fact utilizing coded language that makes Shy the butt of the joke and comes perilously close to outing him without his consent.

Before the show, Midge told Benjamin that everyone in her life becomes the butt of the joke in her stand-up routine. However, all of the people who she's previously lampooned are, like her, Jewish, upper-class, cis, straight, and able-boded. Apart from Susie, Shy is Midge's first friend who falls outside of her usual social circle, and she demonstrated her sheltered upbringing by not understanding that there are some topics she simply should not touch. The jokes she made about Shy were too easy, and ultimately they punched down rather than up.

That's not to say that Midge's career should suffer forever for this. But this is the first time Midge is facing any real consequences for being, as Shy said, "little miss mouthy." Sure, she's been the embarrassing guest at a friend's wedding and the drunk performer at the Gaslight, but never has she really joked about anything so taboo that it could lead to terrible consequences for someone else. If Midge ends up having to sit with her mistake for a little while and isn't allowed back on Shy's tour, that's OK, because mistakes lead to personal growth!

This misstep could mean we'll see a more refined and thoughtful routine from Midge in Season 4. She's gotten considerably more polished since the pilot episode, but this is the first time she's having to confront the fact that her own experiences and observations are not as relatable and funny to everyone else as she might think they are. The world is wide and diverse, and Midge figuring out how to become a better comedian who speaks to various intersecting issues and identities will only help her in the long run. If the show allows Midge to really absorb the consequences of her mistake, she might just become the star Susie believes she can be — and with sincere effort, the true friend Shy needed her to be.