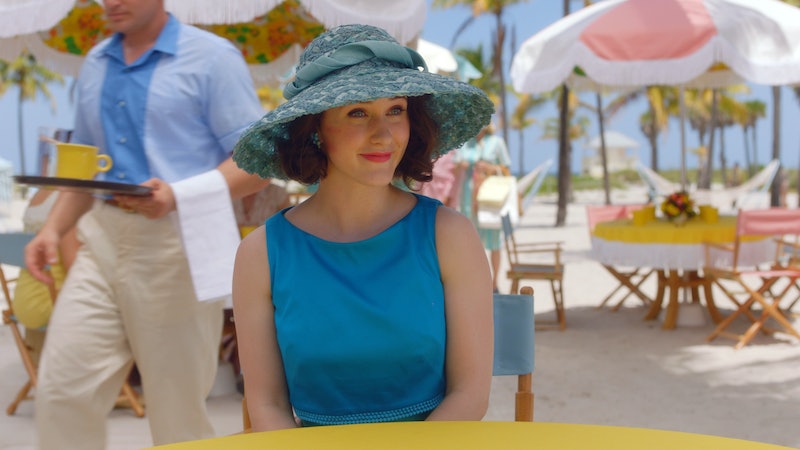 Miriam "Midge" Maisel is taking her show on the road — and leaving old baggage behind. When fans last saw Emmy winner Rachel Brosnahan's affable comedian, Midge had just broken her engagement to Zachary Levi's Benjamin in favor of opening for crooner Shy Baldwin on his six-month tour. In lieu of a champagne-filled celebration, she sought the warmth of her ex-husband Joel, telling him that she needed to be with him "just for tonight." The Marvelous Mrs. Maisel Season 3 picks up the following morning, and true to form, Midge is still living life on her own terms. As Brosnahan explains, the theme of Midge's growing independence — from men and otherwise — plays a major role in the third installment of the Amazon Prime original series.

"I think for the first time, Midge is forging a path that is entirely her own without worrying what anyone is doing or why they're doing it," Brosnahan tells Bustle between sips of green tea on a snowy day in New York City. Although the actor explains Midge is "still learning the ways in which this industry is male-dominated," no man will dominate her life in Season 3. Yes, that includes ex-husband Joel (Michael Zegen), ex-fiancé Benjamin (Levi), as well as her mentor, fellow comedian Lenny Bruce (Luke Kirby). "For the first time, she's letting all of that go and just working on her and being the best comic she can be."

Brosnahan admits she's often asked whether she's "Team Benjamin, Team Joel, Team Lenny," and her response is always the same. "I'm Team Midge," she declares. As for her character, "Midge has always been Team Midge," she jokes, adding that in Maisel's third season, "Midge is Team Midge without holding Midge in relation to anyone else for the first time."

That's not to say that Midge's love life is totally taking a back seat. Despite attempting to finalize their divorce, Joel and Midge's marital status remains in flux. As Zegen explains to Bustle, Season 3 will continue to showcase their hot and cold, love-hate relationship. "One minute they're together and you think, 'Oh maybe they can make this work,' and then the next minute, they have this huge argument and you're like, 'Oh, I don't know if they’re right for each other,'" he says. "But I love that about them. And the thing is, it's always going to be that way."

Brosnahan agrees that Midge and Joel have something special and will "never be able to get rid of each other" — having kids together ensures that — but they may not be endgame. Creator Amy Sherman-Palladino has already told her that Midge and Joel "will never be on the same page at the same time." The actor adds that Sherman-Palladino imagines future Midge being "extremely successful and living in her Park Avenue penthouse with 15 poodles," looking back on the day before Joel left her as the happiest day of her life. "She will have achieved this enormously successful career and she will look back wistfully at how simple things were," Brosnahan predicts.

Given the exes' unique relationship, there are challenges ahead for both of them as they attempt to move on both romantically and professionally. For Joel, there's some romance in store as he tries to open his own Chinatown nightclub and raises the children while Midge is away on tour. Despite his "perfect" ex having previously been engaged herself, Zegen teases "there's always going to be some sense of jealousy" between them as they each explore other romantic possibilities.

Brosnahan adds that Season 3 is about Midge coming to terms with the fact that "she's not the center of everyone's universe." There's a chance, however, that she could catch the eye of Shy Baldwin (Leroy McClain), as they travel around the United States to cities like Las Vegas, Miami, and Chicago. The actor describes the pair's "cool friendship" as being based in Midge's awe of the fictional superstar performer's talent and career, and Shy's amusement by her "fairy being" of a character. "They don't understand each other at all," she says. "But they end up kind of needing each other. And I couldn't possibly say any more."

Then there's the lovably mischievous Lenny Bruce. Despite the palpable romantic tension between the pair throughout the series, Brosnahan seems to believe they're better off not risking their close platonic relationship. "At the end of the day, while it might be tempting... they value their friendship more than what could be a weird one-night thing and then never happen again."

Perhaps the closest relationship Midge has on tour, however, is with her manager Susie Myerson (Alex Borstein). While spending time together on the road means the two strong personalities inevitably butt heads, Borstein promises Bustle that Season 3, which she calls the "season of Smidge," will be full of hilarious moments a la famous duos like Lucy and Ethel and Laverne and Shirley. The 2019 Emmy winner notes, however, that both characters are "having massive growing pains" as they try to build their careers.

"Midge left a marriage because she had a man, the person that loved her, looking elsewhere, seeking someone else to fill something," Borstein says. "I think it would be very hard for Midge to have Susie, then, attempt to do that [with adding other clients], to try to fill a need with someone else. I think that might not be agreeable to Midge."

Susie's divided attention on the road may not be the most conducive to keeping Midge, who stumbles a bit at her debut Vegas performance, focused on her standup act, rather than analyzing the advances of her several potential Season 3 love interests. But if there's one man Susie isn't rooting for, it's Joel. "She does not want Midge to leave her and go back to that life," Borstein says. "It really is a triangle to some degree, and Susie feels competitive with Joel. Like, 'I can give you a better life than he can. Trust me, come with me.' But I think she does respect the love she knows Joel actually has for her. I think she knows deep down Joel's not a monster. But he would prevent Midge from having a life she's destined to have."

Midge is showing no sign of returning to her life as a housewife, though. Instead, her growing independence in Season 3 only causes her universe to expand — regardless of whether or not she's at the center of anyone else's.

More like this
Everything To Know About Netflix’s 'Never Have I Ever' Season 4
By Jack Irvin and Gabrielle Bondi
Meet The New Team Of Residents Joining 'Grey's Anatomy' In Season 19
By Brad Witter and Sophia Moore
An Ultimate Guide To The Music Of 'Rap Sh!t'
By Brad Witter
This New Comedy Is The Perfect Combination Of 'Jane The Virgin' & 'New Girl'
By Darshita Goyal
Get Even More From Bustle — Sign Up For The Newsletter