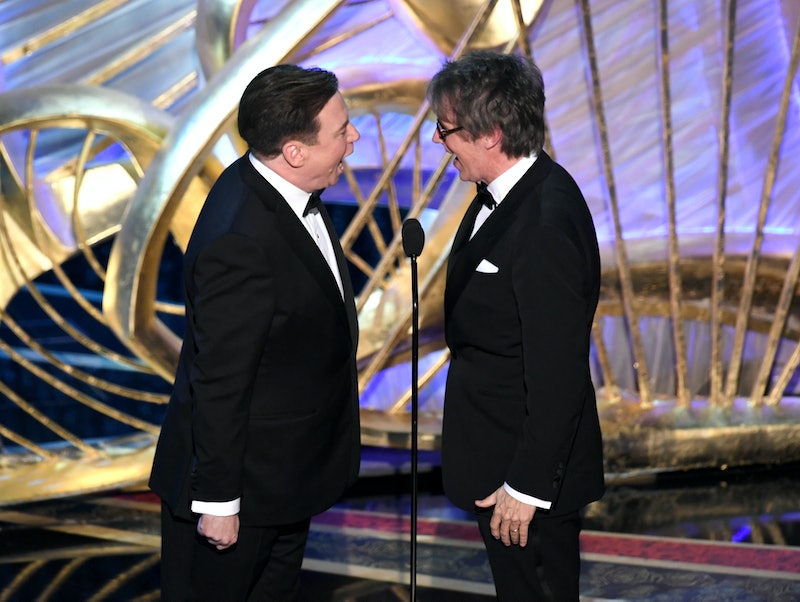 Party on! For the introduction of Best Picture nominee Bohemian Rhapsody at the 2019 Oscars, Mike Myers and Dana Carvey reunited in-character as Wayne Campbell and Garth Algar, and Wayne's World fans were basically like, "We're not worthy!"

So, in case you've been living under a pop culture rock for the last several decades, there's a famous scene in Wayne's World in which Wayne (played by Mike Myers), Garth (Dana Carvey), and a few of their head-banging friends rock out in their car to Queen's "Bohemian Rhapsody." It is ... epic, and has undoubtedly encouraged fans of all ages and generations to do the same while driving. Carefully, though, of course — and always while obeying all traffic signs and laws. Safety first, guys.

That's why choosing Myers and Carvey to introduce Bohemian Rhapsody's Best Picture nomination was so genius, and why Wayne's World fans on Twitter were pretty much losing their minds. The two stars took the stage in-character as Wayne and Garth, with Carvey announcing, "I'm gonna hurl!" as they started their mini-skit.

"Don't hurl, because if you honk, I'll spew," Myers replied, using the characters' memorable, and oft-repeated, slang. "Well if you spew, I’ll blow chunks," Carvey said, "so ... I shall not hurl." Cool, yeah, because that would be seriously grody, dude.

"But seriously, 'Bohemian Rhapsody' played a large part in the success of Wayne’s World," Myers continued. "We’re humbled to be associated with that brilliant song." The two presenters then basically bowed down to the late Freddie Mercury and the rest of Queen — who, by the way, performed a medley of the band's songs to open the show — and rolled the trailer for the Rami Malek-starring film.

Now, this isn't the first time that Myers and Carvey have reunited as their much-beloved characters. Wayne's World actually started out as a skit on Saturday Night Live back in 1989, and ended up becoming a recurring bit on the show for the next several years. One of their most recent appearances as Wayne and Garth was in 2015 for SNL's 40th anniversary special.

Fans on Twitter could hardly contain their excitement about the comedians' surprise reunion at the 2019 Academy Awards, though. "THIS WAYNES WORLD SKIT IS GIVING ME LIIIIIIIIIFE," one fan wrote. "Party on Wayne, party on Garth." Another fan exclaimed, "OMG WAYNE'S WORLD IS ON #Oscars IM HURLING #WaynesWorld." A third viewer mused, "Turned on the #GRAMMYs in time to see @danacarvey and #MikeMyers do a #WaynesWorld impression to introduce #BohemianRhapsody and turned it off afterwards knowing it couldn't get any better!"

It was a pretty memorable moment from the evening's telecast — no doubt about that. And it was, as Wayne and Garth would say, totally excellent. Short and sweet, but totally excellent. Maybe too short, actually. Was their appearance at the Oscars a teaser for what's to come, perhaps? Could there be another Wayne's World movie in the works? Who knows. In the meantime, all we can do is party on.