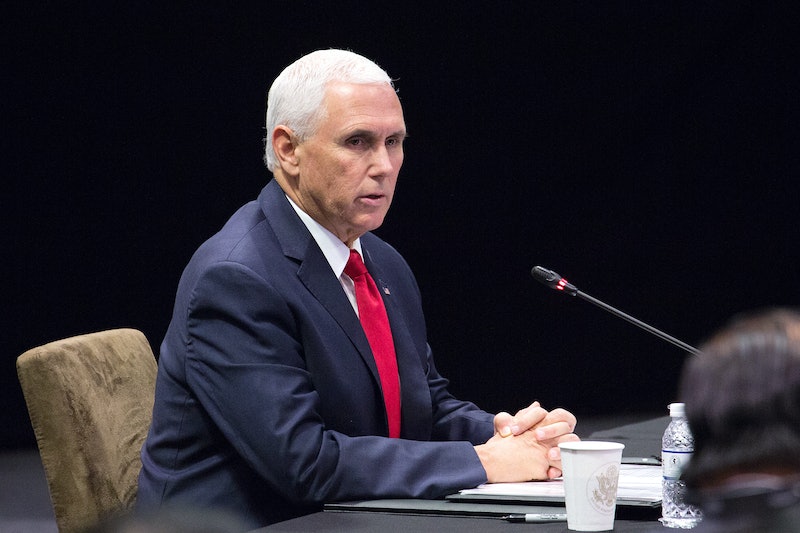 President Trump said Friday that multiple former presidents have told him they support a U.S.-Mexico border wall. That appears not to be the case, however, as every living former president either opposes the wall or has denied speaking to Trump on the issue at all. In an on-air interview Tuesday, Vice President Mike Pence defended Trump's claim that past presidents support a wall with a baffling explanation.

"Which former presidents told President Trump, as he said, that he should’ve built a wall?," NBC News' Hallie Jackson asked the vice president. "All their representatives have denied that that was the case.”

"That's different from telling the president, though, right?," Jackson pointed out.

"But look, the — honestly, the American people wants [sic] to address this issue," Pence replied.

Pence's explanation comes as the partial government shutdown, which Trump instigated at the end of the year in an attempt to procure border wall funding, is in its second week.

“[Construction of a wall] should have been done by all of the presidents that preceded me, and they all know it,” Trump said at a news conference on Friday. “Some of them have told me that we should have done it.”

Shortly thereafter, former presidents Jimmy Carter, Bill Clinton and George W. Bush all denied, through spokespeople, that they had ever talked to Trump about the border wall. Former president Barack Obama didn't address Trump's claim; however, he's spoken out against the wall in the past and, according to Politico, hasn't talked to Trump at all since the inauguration (save for a brief interaction at former president George H.W. Bush's funeral).

Pence was also asked about Trump's claim in a separate Tuesday interview with ABC News' Jonathan Karl. When Karl asked the vice president about that and another recent lie Trump told, Pence brushed aside the concerns and suggested that Americans aren't "concerned" with how truthful the president is being.

"Well, look — the American people aren't as concerned about the political debate as they are about what's really happening at the border," Pence said.

Pence's comments come hours before Trump is set to give a televised address on the importance of border security and a border wall. It has been speculated that the president may use the opportunity to declare a national emergency, a measure that could possibly give him more leeway to begin construction on a border wall.

On Friday, White House Press Secretary Sarah Huckabee Sanders falsely claimed that "last year alone, there were nearly 4,000 known or suspected terrorists who CBP picked up that [sic] came across our southern border." NBC News subsequently reported that, in the first half of 2018, only six immigrants on the U.S. government's terrorist watch list were apprehended at the southern border. Days later, senior Trump Adviser Kellyanne Conway admitted that Sanders had made an "unfortunate misstatement," and had been confusing apprehensions at the southern border with apprehensions at airports, seaports and land ports.

"Everybody makes mistakes, all of us," Conway said on Fox News.