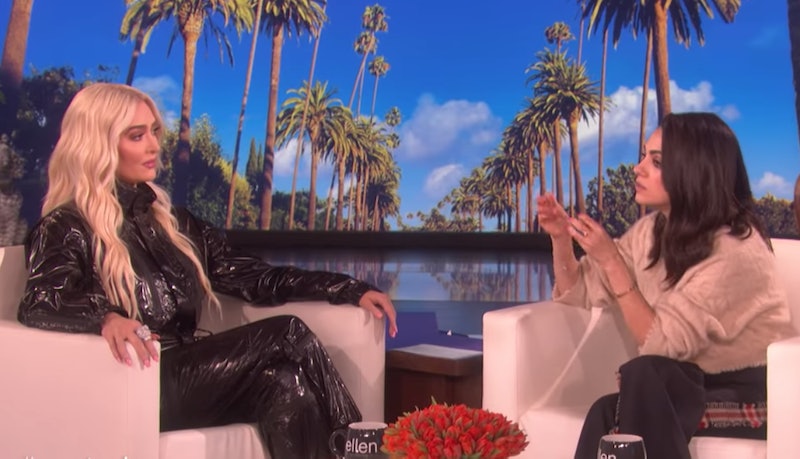 This season of the Real Housewives of Beverly Hills has involved one major piece of drama — "PuppyGate." Even Mila Kunis recently grilled Erika Jayne about RHOBH's dog drama, because she's just as invested as much as fans are. While taking over hosting duties for The Ellen DeGeneres Show on Monday, Kunis quizzed Erika about the convoluted incident involving Lisa Vanderpump, Teddi Mellencamp, and Dorit Kemsley.

Before diving into Erika and Kunis' conversation, let's briefly explain the dog drama. As fans are well aware, Season 9 has seen the drama unfold regarding Dorit's former dog, Lucy Lucy Apple Juice, whom she adopted from Vanderpump Dogs. That said, Dorit revealed that after the dog had bitten her children and husband, PK, she gave the dog away to another home, rather than returning her to Vanderpump Dogs. However, Lucy's new owner ended up taking her to another shelter, which Lisa later found out about and wasn't exactly thrilled.

Dorit's decision caused friction with Lisa and resulted in quite the drama unfolding. As recently showcased on the Bravo reality series, Teddi claimed Lisa devised a plot to make Dorit look bad over the dog drama by spreading gossip about her and even manipulated Teddi into being her mouthpiece. Both Teddi and Lisa have also shared multiple screenshots from text messages regarding the situation. That said, Lisa has repeatedly denied she's had any involvement in the scheme Teddi first brought to light. Teddi has admitted she was involved and even apologized to Dorit.

Now, back to Erika and Kunis' interview. After agreeing that they believe Lisa manipulated Teddi into doing her dirty work, Erika said about Teddi's claims, "I'm on the truth side and that's the truth." She also added about Teddi, "I think she got cold feet and she got caught. She backed out at the very last minute. But listen, it takes a lot to want to do something like that."

Erika didn't stop there and even revealed to Kunis that not only hasn't she spoken to Lisa since everything went down, but she also dropped the following tea:

"I don’t know if she’s quitting the show. I know that she stopped showing up mid-season and we were stuck looking at each other like, 'What's going on?'"

It hasn't been confirmed if the Vanderpump Rules star really stopped showing up mid-season, but a production source previously told E! News in November 2018, "Lisa will appear in the majority of episodes this season. She has not been filming at every event, but fans can expect to see her throughout."

Lisa has admitted she probably should've taken time off from Housewives. In an interview with Entertainment Tonight published in February, Lisa said she asked Bravo and Andy Cohen for a year off following her brother's death, who died in April 2018. Obviously, she didn't take it. Lisa told ET,

“[Andy] said, 'You know, I think we should've given you a year off when you asked for it.' He said, 'I don't think you were in a mental state where you were really prepared to deal with it,' it was very emotional … 'With hindsight, we probably should've given you the year off.'"

Lisa also discussed the RHOBH Season 9 reunion with Us Weekly in March about whether or not she'll be in attendance, and said, "I don’t know yet because that’s so far away. I don’t know how the audience would react, so I really don’t know. It’s so far in advance."

There's no doubt it's been a tough time for Lisa recently, but it doesn't seem like the dog drama and whatever else is ahead on RHOBH this season is going away anytime soon.