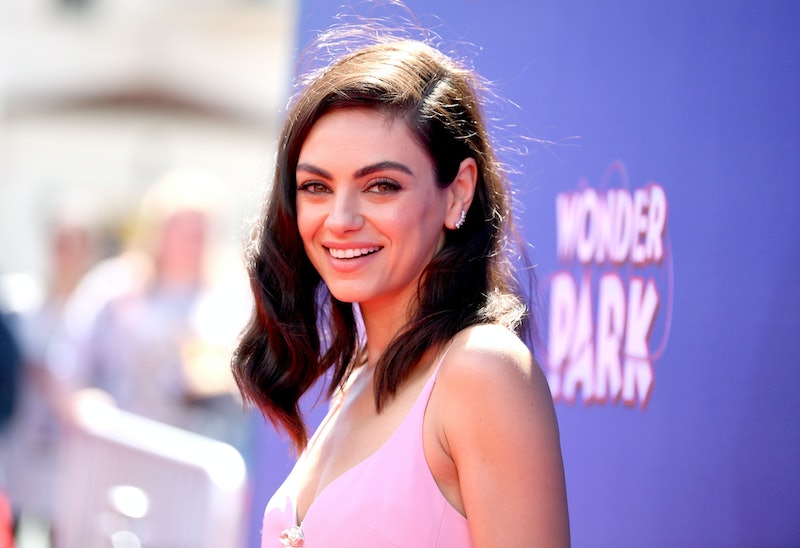 On the episode of the Andrea Savage: A Grown-Up Woman podcast that dropped on Oct. 7, Mila Kunis said The Real Housewives of Beverly Hills would ideally be in her future, but Ashton Kutcher is extremely not on board. Reality TV superfan Kunis talked to host Andrea Savage about her love of RHOBH, going so far as to say that she has floated the idea of eventually becoming a Beverly Hills Housewife by Kutcher. She told Savage, “I did ask my husband once, I was like, ‘Listen. Later, in like 20 years, 30 years, what do you think of me going on Real Housewives of Beverly Hills?’ I’m like, just for like, a year. He was like… ‘I would kill you.’”

Savage and Kunis also played a RHOBH-themed round of “Make Love, Marry, Murder.” The game started off with Paul “PK” Kemsley, Mauricio Umansky, and Harry Hamlin. She chose to “murder” PK, “marry” Mauricio, and “make love” to Harry. Savage then asked the same question about those three Real Househusbands of Beverly Hills' wives, and Kunis opted to “murder” Dorit Kemsley, “marry” Kyle Richards, and “have fun” with Lisa Rinna.

Kunis’s RHOBH fandom is well-documented. When she acted as guest-host on an episode of The Ellen DeGeneres Show that aired on April 11, the Bad Moms star interviewed Erika Jayne. Like so many RHOBH fans, Kunis had a lot of questions about Puppygate, the then-unconfirmed rumors regarding Lisa Vanderpump leaving the show, and the Season 9 cast's dynamic. Kunis asked if she could attend the RHOBH Season 9 reunion taping, and Erika said, "Yes, absolutely."

Kunis ultimately did not go to the reunion when it filmed in June, and apparently, Andy Cohen saw that coming. As he revealed to Erika on a March episode of Watch What Happens Live, Kunis will not appear on his late-night talk show because, as she apparently told Cohen, "I'm a little scared of you." The Bravo king said he "would love it if she came to the reunion," but he did not seem hopeful.

Less than a year before she sat down with Erika on Ellen, Kunis got a chance to chat with Rinna on Live with Kelly and Ryan. When the RHOBH star was filling in for co-host Kelly Ripa on Aug. 1, 2018, Kunis happened to be one of the morning chat show's guests. The That 70s Show actor told Rinna that she has always watched Real Housewives programs, but her fandom really clicked when RHOBH came long because, as she put it, "That's my hood." She went on say that she has watched every singe episode of Beverly Hills, before adding, "Needless to say, [meeting Rinna] is very exciting for me, I gotta tell you. It's such a treat."

Kutcher may not be into the idea of being on RHOBH at some point down the road, but that is not to say he is not into unscripted television. As Kutcher said on a 2017 episode of Good Morning America, watching The Bachelor shows every week "is like religion in [their] house." He and Kunis are such big fans of The Bachelor franchise, they went on Rachel Lindsay's season of The Bachelorette. Shark Tank Season 7 welcomed him as a guest shark. And, of course, in the '00s, he was the host of MTV prank series Punk'd.

Kutcher clearly likes reality TV, but as Kunis said in the aforementioned episode of Savage's podcast, he draws the line at becoming a Real Househusband of Beverly Hills.