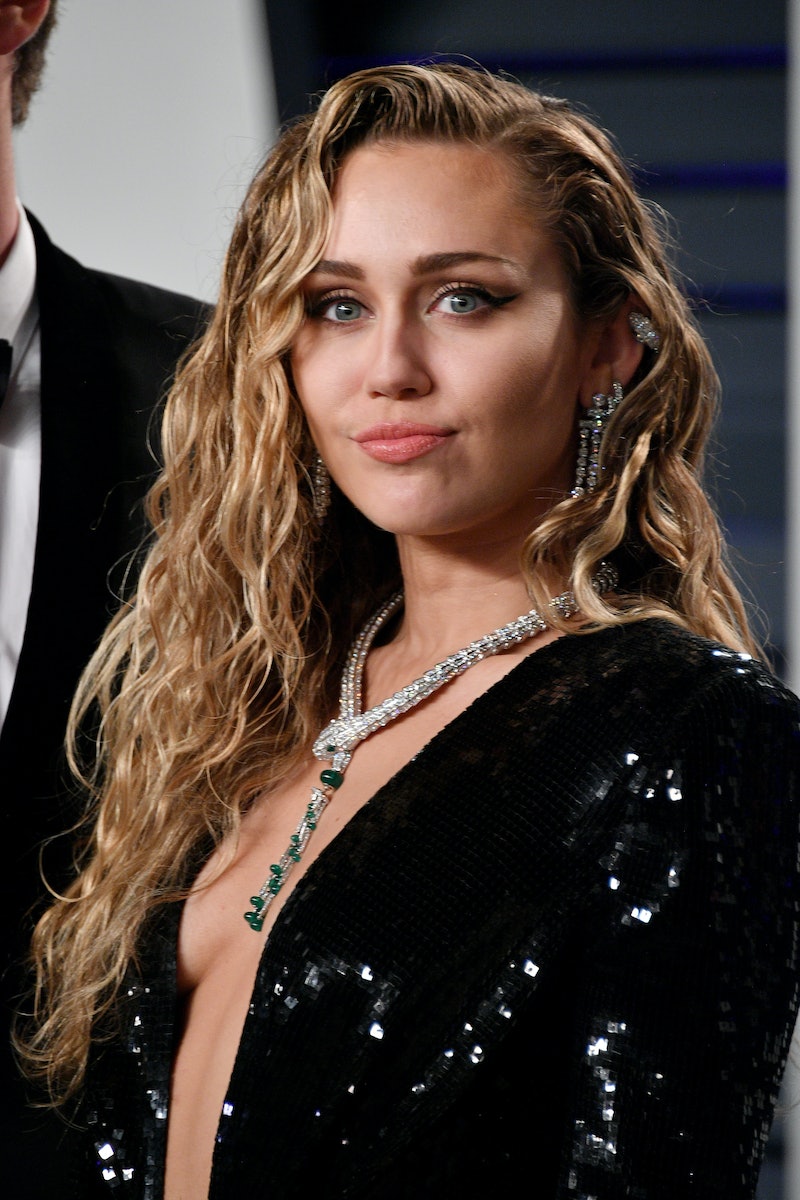 Hannah Montana, er, Miley Cyrus sure knows how to give her fans what they want. And what they wanted just so happened to be a little nostalgia. On Thursday night, March 28, Miley Cyrus channeled Hannah Montana, as she highlighted on social media. Not only did she have a blast bringing back her famous character for the night, but fans were also super into Cyrus' throwback fun.

The best part about Cyrus' turn as Hannah Montana may just be that she went all-in on her transformation. On her Instagram Story, she related that she actually dyed and cut her hair in a style that resembled the Disney character. According to People, the "Nothing Breaks Like a Heart" singer posted a photo on her Instagram Story of herself in a salon chair. The snap was reportedly captioned, "#NoFilter #NoWig ALL ME!"

In one of the many videos that she posted, Cyrus clarified, with a bit of humor, that she decided to go full Hannah Montana after "going back and forth" with her alter-ego. She said:

"You know, guys, it was so hard going back and forth that I decided I'll just be Hannah forever. She was getting a lot of press this week, thanks to me!"

In case you were wondering what said press was, this week marks the 13th anniversary of the birth of Cyrus' Disney role, as Billboard noted. Like she said, Hannah Montana nostalgia has been at an all-time high thanks to the singer who posted about the anniversary earlier in the week and had some interesting social media engagement with the character.

Of course, Cyrus didn't just post about her epic, Hannah-approved hair transformation, she also shared numerous snaps and videos showing her "rocking out the show." Obviously, the Last Song actor had to show off her singing chops during renditions of some all-time classics aka "The Best of Both Worlds" and "Nobody's Perfect."

She also posted a video of herself singing along to Migos' track "Hannah Montana." Basically, it was super meta, in the best way possible.

In addition to posting some fun clips that will leave you with 'Best of Both Worlds" in your head all day, Cyrus posted some equally fun snaps. She posted one of her own 10-year challenge, showing just how far Hannah Montana has come.

Clearly the singer had a ton of fun rocking her famous character's hairdo. And, naturally, fans, in turn, went wild over seeing Cyrus' Hannah Montana look.

Just as this Miley Cyrus news site tweeted, this video where she's singing "Nobody's Perfect" with her Hannah Montana hairstyle is the biggest and best throwback ever.

Could Cyrus follow in the footsteps of her fellow Disney stars, the Jonas Brothers, and have a true comeback moment? Fans everywhere would be here for it.

Hannah Montana Is Back, Y'all

Hannah Montana being back in the public eye is just too amazing.

This user said that they'd be beside themselves if they saw Cyrus, in her Hannah hairdo, singing one of her most classic Disney songs. Honestly, same.

Tying back to a recent Avengers: Endgame meme, one user joked that Hannah Montana has been officially avenged following Cyrus' throwback moment.

As of right now, it's unclear whether the singer will have a full comeback of her Disney character or not. Regardless, it's easy to see why fans were stoked to see any throwback moment featuring the singer's alter-ego, even one that was purely in good fun, because seeing Cyrus as Hannah Montana yet again is truly "The Best of Both Worlds."