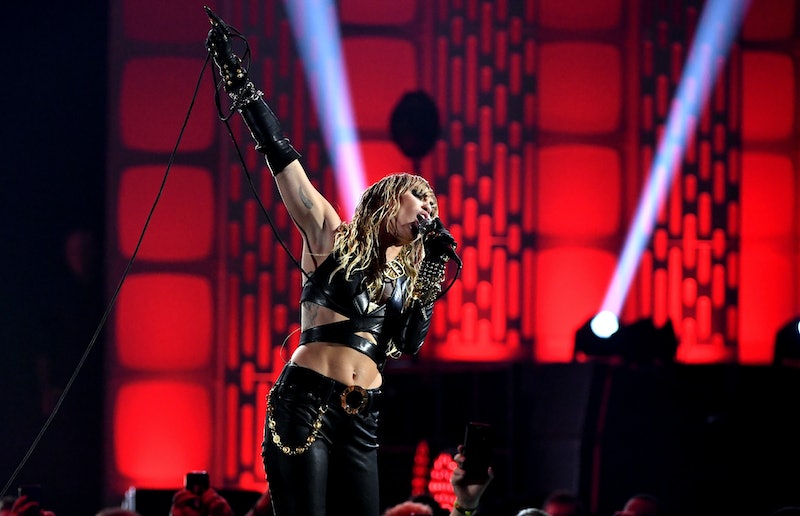 Miley Cyrus might be about to come in like a wrecking ball all over again. After experiencing some major changes in her personal life, the star's creative juices are flowing once again and it seems that she might be ready to sing about everything that's happened. Miley Cyrus is back in the studio making new music following her split from Kaitlynn Carter.

Late on Wednesday, Oct. 2, the singer revealed to fans on social media that she was recording new music, hinting that she was rejuvenated to write new tunes because of the major events that have happened in her personal life. "Back in the yo!," Cyrus proclaimed on Twitter, sharing a photo of her relaxing in the recording studio. "I am so f*cking inspired right now," she teased, complete with the butterfly and ocean emojis. As reported by Entertainment Tonight, she posted the same photo on her Instagram Stories, adding, "Thank you, new moon."

The new inspiration came on the heels of her recent breakups. The star separated from husband Liam Hemsworth in August 2019, and he subsequently filed for divorce. After announcing her separation, she was spotted with Carter, Brody Jenner's ex who appeared on The Hills: New Beginnings, and the two were reportedly dating before they also split in September 2019. Luckily for fans, Cyrus often pours all of her emotion and heartache into her music, which produces great results. As proven with her anthems "Wrecking Ball" and "Slide Away," Cyrus can sing one hell of a break-up song.

Despite these major events in her life, Cyrus seems happier and more enthusiastic than ever. Prior to hitting the studio on Oct. 2, the singer embarked on a pre-Halloween adventure, visiting a pumpkin patch, petting some animals, and having a Bachelorette moment with some creepy creatures at a haunted house. And, she recently returned from a "necessary" vacation in Utah with her mom Tish and sister Brandi to refresh herself.

The new songs that Cyrus is currently concocting will be the latest in a string of new releases from the singer this year. In May 2019, she released She Is Coming, the first of three planned EPs that will comprise her new album, She Is Miley Cyrus. Cyrus also had a smash hit, "On A Roll," as Ashley O, her fictional pop star persona from Black Mirror. More recently, she debuted "Slide Away" live at the 2019 MTV Video Music Awards and teamed up with Ariana Grande and Lana Del Rey for "Don't Call Me Angel" off the soundtrack for the upcoming Charlie's Angels remake.

The singer did spoke about She Is Miley Cyrus in an interview with ELLE back in July 2019. "‘She’ does not represent a gender," Cyrus said about the concept of the album. "She is not just a woman. ‘She’ doesn’t refer to a vagina. She is a force of nature. She is power. She can be anything you want to be, therefore, she is everything. She is the super she. She is the she-ro. She is the She-E-O.”

It's unclear if her current recording sessions have changed plans for the upcoming album, but whatever is next in store for Cyrus, rest assured: she can't stop (and she won't stop) creating more music.