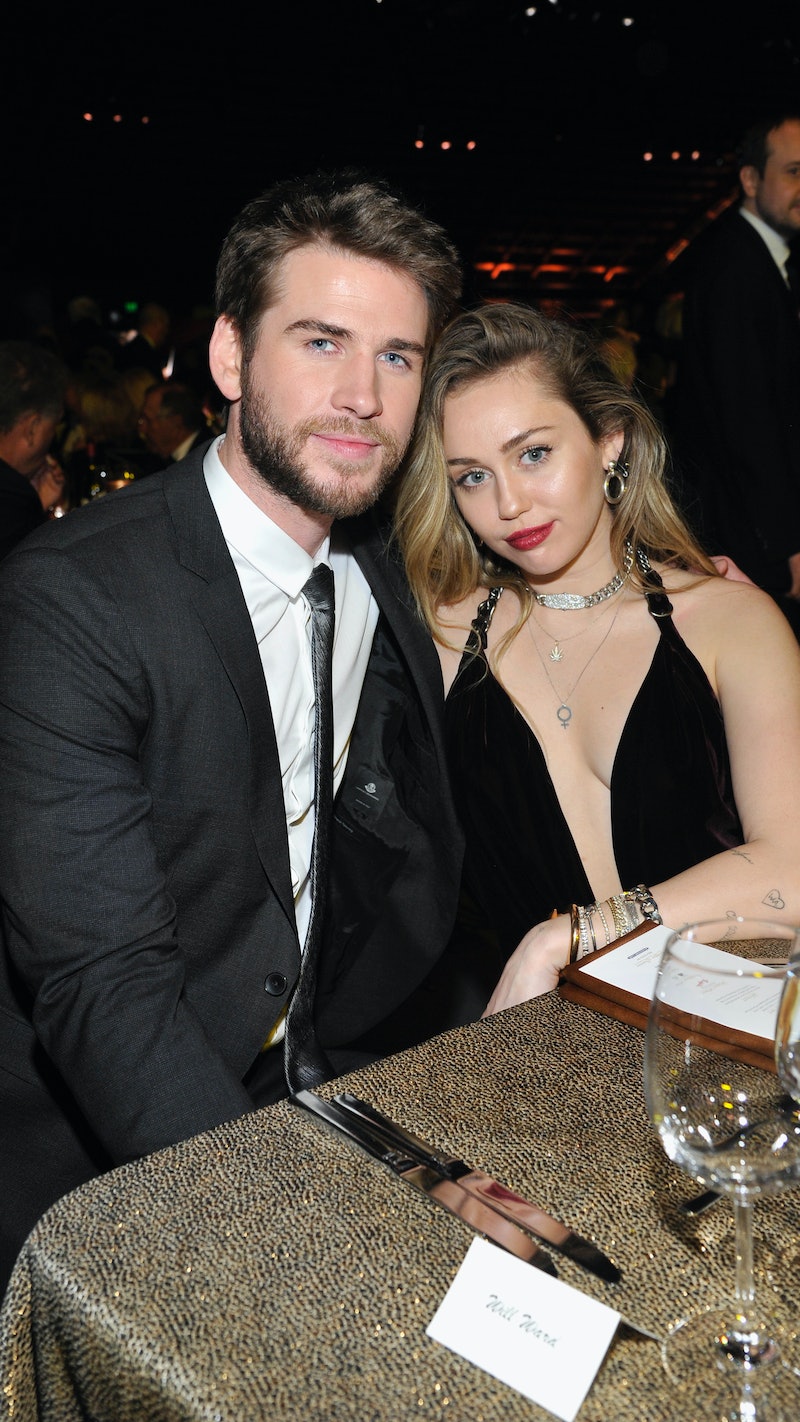 A little over two months since they wed, Miley Cyrus and Liam Hemsworth attended a pre-Oscar Awards dinner hosted by the Chanel and Charles Finch at The Polo Lounge in Beverly Hills, according to Entertainment Tonight. Of course, they both looked stunning. Cyrus, who is always challenging conventional expectations with her style, wore a neutral tweed suit — gaucho pants and a collared, short-sleeve button-up top. She accessorized it with Chanel pieces — including a bejeweled headband that boasted the classic Chanel logo — and completed the look with cherry red statement heels. Hemsworth went for a classic look with an all-black suit.

Cyrus posted a bunch of pictures of her and her husband looking flawless throughout the night. "My 2 favorites in one picture," she wrote under one of them, referring to Hemsworth and Chanel, the designer label. She also captioned another, in which Cyrus is giving a full-on model smize and Hemsworth is goofing around with one very important word: "HOME."

Home has been a touchy subject for the two as they lost theirs in Malibu during the California wildfires in November. Since then, Cyrus and Hemsworth have both shared the grief they've endured from losing their home with fans. The two were married in Cyrus' secondary home in Franklin, Tennessee, per Entertainment Tonight, and their wedding was very low-key and intimate.

In a personal essay recently published by Variety, Cyrus explained how crucial the Malibu fire was in strengthening her relationship with her husband. "I'm not sure without losing Malibu, we would've been ready to take this step or ever gotten married, who can say?" she wrote. "But the timing felt right and I go with my heart. No one is promised the next day, or the next, so I try to be 'in the now' as much as possible."

She also elaborated on how the last few, short months have had such a huge impact on her life and relationship. "When you experience what we experienced together with someone, it is like glue," she told the publication. "You're the only two people in the world who can understand. We really are stronger together." She went on to say that everything they lost is replaceable, "but you can't buy spirit."

And this is one couple's whose spirit has remained strong despite all they've been through. Although neither of them are Oscar nominees this year, they're still enjoying awards season — and each other. But they're making time to hang out with friends too. In a series of photos from the party, Cyrus can be seen chatting with her pals Margot Robbie and Kristen Stewart. She captioned the adorable pictures with "HOMIES."

While 2018 was full of highs and lows for this celebrity couple, 2019 is off to a great start. Not only do they have glam parties to attend, cool friends to spend time with, and the Oscars to watch, the newlyweds also have each other. And as their adorable pictures prove, there's nothing sweeter than that.