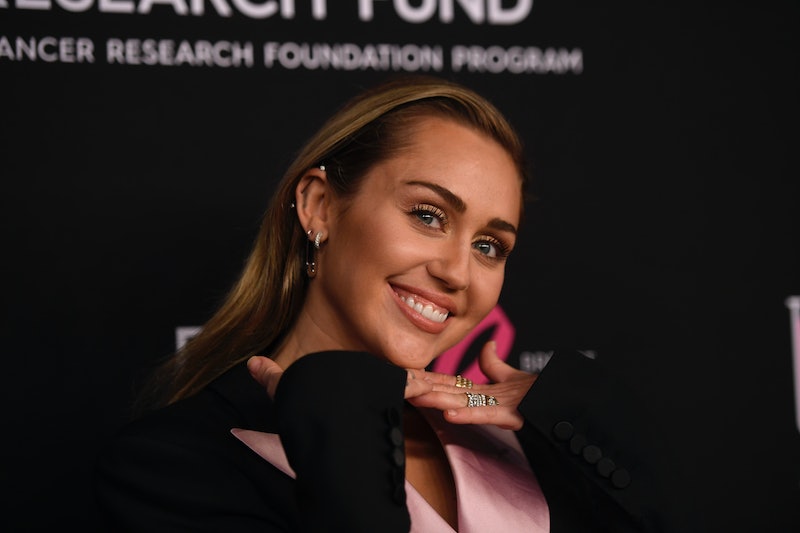 They say that art imitates life, but for Miley Cyrus, it might be the other way around. The singer has been sharing plenty of throwback photos and videos from her Disney Channel days on social media, and Cyrus' recent video proves that Hannah Montana predicted the future during an episode of the iconic show.

On Wednesday, Cyrus shared two videos on Twitter that paired lines from her former sitcom with some of her most infamous, Bangerz-era antics, joking that Hannah had a "premonition" of what was to come. In the first clip, Hannah tells her father (played by Cyrus' real-life dad, Billy Ray), "This has always been my dream: Being on national television holding my own booty." The video then cuts to a shot of Cyrus performing onstage in a thong bodysuit, rubbing her behind in front of the audience.

During Hannah's second "premonition," the character is nervous about an upcoming performance, telling BFF Lilly (Emily Osment), "What if I forget to put my costume on? Then I'd be singing in my underwear!" The clip then cuts to Cyrus, in a black and red striped bikini, singing onstage during one of her concerts. Clearly, fans who were surprised by Cyrus' "wild" days simply weren't paying enough attention to old episodes of Hannah Montana.

The singer has been reliving her Hannah Montana days quite a bit in recent weeks; on March 11, Cyrus posted an old video of herself performing her breakout single "7 Things" at an awards show, sharing the microphone with fellow Disney star Selena Gomez. "Your generation = 7 Rings MY generation = 7 Things 💍7️⃣💍7️⃣💍7️⃣💍7️⃣💍 Simpler times," Cyrus captioned the video. (Ariana Grande responded to Cyrus' video by gushing that "'7 Things' defined me.")

A little while later, Cyrus teased her upcoming new music with a still from Hannah Montana, sending fans into yet another frenzy over her throwback post. Alongside a photo of Miley and Lilly listening to something and smiling, Cyrus wrote, "Listening to M7 like…," to let fans know that her follow-up to Younger Now is definitely on its way.

Before reliving her Disney days on social media, Cyrus talked about her iconic character while serving as a guest judge on the Season 11 premiere of RuPaul's Drag Race. After the contestants performed a lip sync battle to "Best of Both Worlds," host RuPaul Charles asked Cyrus "whatever happened to" her alter ego, to which the singer quipped, "A lot of drugs."

Cyrus gave a much more serious response to that question back in October 2017, when she opened up to CBS News about how playing Hannah Montana shaped her identity as an adult. “I think people loved Hannah Montana because Hannah Montana [the character] did feel real. And that’s ’cause I was under there. And people forgot that sometimes," she told CBS, joking that the touring as both herself and her character got a little confusing sometimes. "I think that’s probably what’s a little bit wrong with me now!"

This new evidence of Hannah Montana predicting Cyrus' own future doesn't exactly help separate the actor and singer from the character that made her famous. Now, if only we knew that Hannah ended up with a hunky Australian actor, the parallels would really be complete.