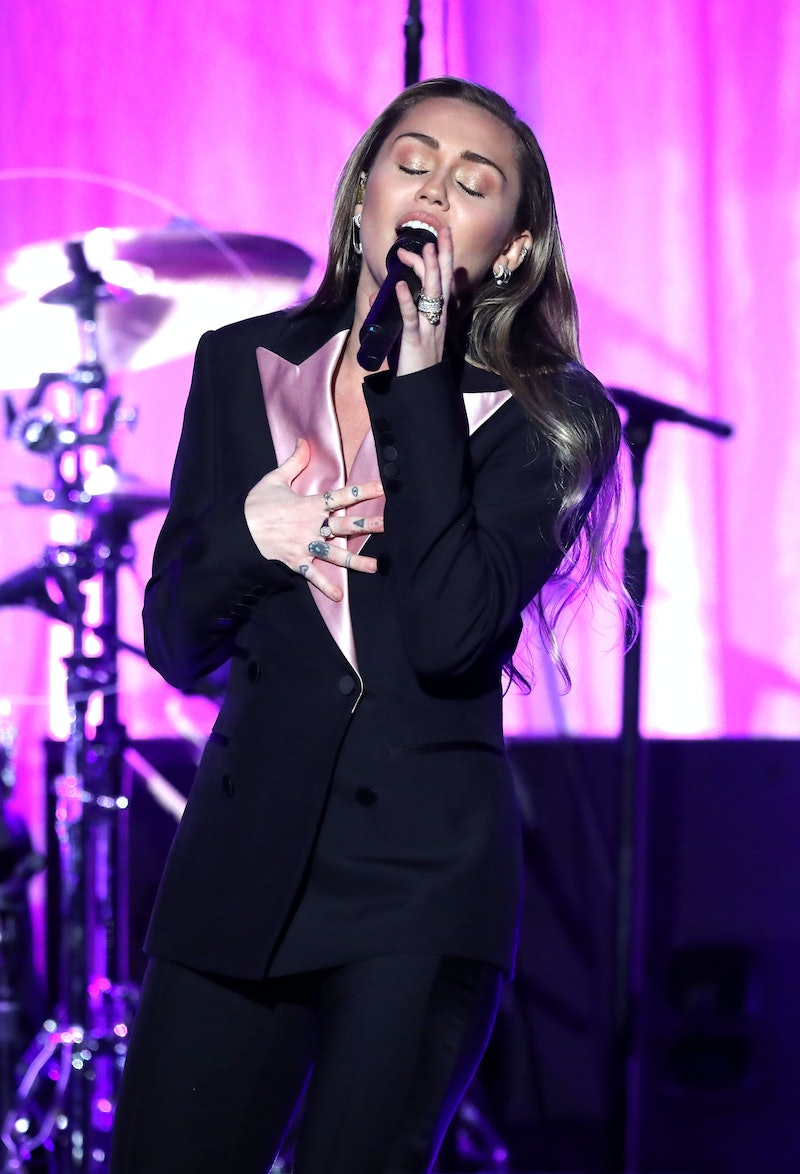 So la da da di, we like to party, dancing to Miley Cyrus’s tweet about her new album. On Monday, the Disney Channel actor-turned-pop music superstar posted a screengrab from her Hannah Montana days where she and Emily Osment (aka legendary best friend pair Miley Stewart and Lilly Truscott) share a pair of earbuds as something plays on the ol’ iPod. “Listening to M7 like…,” she wrote. Cyrus is using a Hannah Montana photo to illustrate the experience of listening to her follow-up to 2017’s Younger Now, *very Miley Stewart voice* say what?

We don't know the "Nothing Breaks Like Heart" singer's seventh record's actual name. We don't know the exact day it will be out. But we do know that Cyrus is out there somewhere chilling out, taking it slow, and rocking out the show as she listens to it.

Though Cyrus has not unveiled the "M7" official release date, she has offered up a ballpark estimate as to when her seventh album will most likely be out. When she and Mark Ronson appeared on Beats 1 back in December, Cyrus revealed to Matt Wilkinson that she was shooting for a June release date for her seventh album. In Vanity Fair's March cover story, Cyrus said she hopes to put out her new record by this summer. So there you have it. "M7" will probably arrive and be in our hot little hands in just a few months.

What I am getting at: Cyrus could release a new single, like, any second now.

I can almost seeeeee it. That Miley Cyrus album release date I'm dreeeeeeamin'. There's a voice inside my head sayin' you'll eventually reach it.

In a recent interview with 95.5 PLJ's Melony Torres, Cyrus teased the album's sound and got into what fans can expect. She said,

“Me and Mark have kind of said I think mine is even kind of even a little heavier than [“Nothing Breaks Like a Heart’], a song that he and I have done together is kind of more rock-driven, kind of modern Debbie Harry, kind of like Joan Jett. But then we’ve got songs with Mike Will that lean more hip-hop. And then songs with Andrew Wyatt, who is from Miike Snow, so it leans a little more pop-alternative. So I just kind of have everything. And some straight down the middle pop records, too.”

In the aforementioned Vanity Fair piece, she opened up some more about how the album does not stick to one genre.

“There’s psychedelic elements, there’s pop elements, there’s more hip-hop-leaning records," she told the publication. "You know, in the same way I like to kind of just be genderless, I like feeling genre-less.”

Nothing breaks like a heart that is waiting for a new Miley Cyrus album.