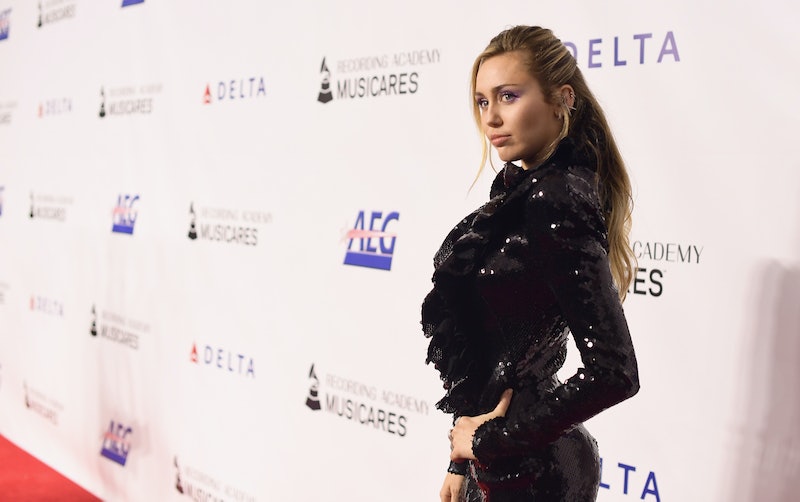 Even before she took the stage at the 61st Grammy Awards on Sunday, Feb. 10, one music legacy managed to steal everyone's hearts. Miley Cyrus shared a sweet throwback photo of herself and father Billy Ray Cyrus while tweeting her excitement about attending the 2019 Grammys.

"On our way to the Grammys like.... @billyraycyrus," the singer captioned the adorable snapshot of herself smiling out of the window of a car alongside her father, who is rocking his iconic "Achy Breaky Heart" mullet. The singer isn't nominated this year, but she is taking the Grammys stage to perform.

Cyrus also brought her father and mother, Tish, along with her to the MusiCares benefit on Friday night, where she performed alongside Shawn Mendes to honor Dolly Parton as the Recording Academy's Person of the Year. "FAM BAM THANK YOU MAM! @tishcyrus @billyraycyrus Thanks for giving me life y’all! You’re the best!" Cyrus captioned a series of photos from the evening on her Instagram. "(@katyperry @dollyparton @reallindaperry included because they’re also family xoxo)."

According to Parton, the country legend met Billy Ray in the 1990s, during the heyday of his fame, and the pair have remained close for decades. In fact, Parton is even Cyrus' godmother, which made her the perfect choice to sing at the Recording Academy's tribute concert on Friday.

While Cyrus teased that her father will be accompanying her to the Grammy Awards, many fans are excited to see if she and her new husband, Liam Hemsworth, will walk the red carpet together. The low-key couple — who tied the knot in an intimate ceremony on Dec. 23 — tend to avoid walking red carpets together, but Hemsworth recently gushed about newlywed life during a recent appearance on Live with Kelly and Ryan.

"She'll still be, obviously, known as Miley Cyrus. But she took my name, which is great. I think that was, honestly, one of the best things about it. I didn't ask her to take my name, and she was like, 'No, of course I'm taking your name.'"

Hemsworth also revealed that he and Cyrus were having a lot of fun getting used to calling each other "husband" and "wife" during their first few weeks of marriage. "I mean, it's only been a month and a half, or something," Hemsworth said on the show. "But the first couple weeks, it was really fun to be wife and husband." He also noted that he's changed Cyrus' name in his phone to "Wife," because everyone knows it's not official until the contact information is updated.

If the pair do choose to attend the Grammy Awards together, it will mark their second award show appearance as a married couple; a few weeks ago, Cyrus accompanied Hemsworth to the G'Day USA awards gala, where the actor sweetly praised his new wife from the stage. While accepting the Excellence in Film award from G'Day USA — which is an economic diplomacy program that aims to improve the relationship between Australia and the United States — the actor profusely thanked Cyrus.

"Thank you to my beautiful wife," he said, after thanking his family, according to Variety. "You are a sweet, sweet angel. Yeah, you’re great." A video from the event also caught Cyrus' jaw dropping when Hemsworth mentioned her, at which point she reportedly yelled from the crowd, "More about me!"

Hopefully, Hemsworth will be at the Grammy Awards to support his new wife — and provide fans everywhere with even more adorable moments. But if not, at least we can take comfort in the hope that Cyrus and her father will get the chance to recreate their adorable throwback photo.