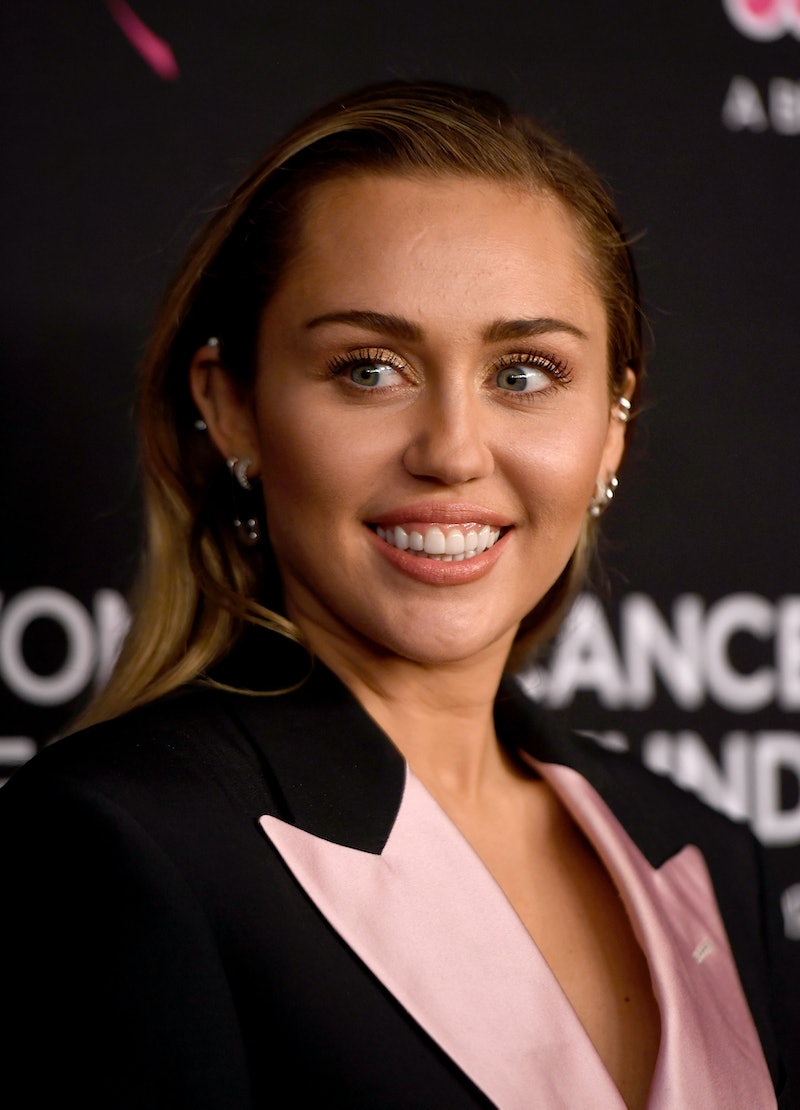 Once upon a time, Miley Cyrus and Nick Jonas were one of young Hollywood's golden couples. Even though they split over a decade ago, it's clear that the former Disney stars are still on good terms. On Twitter, Nick Jonas and Miley Cyrus bonded over a throwback photo, which featured the "Nothing Breaks Like A Heart" singer donning a Jonas Brothers T-shirt. And their fun interaction is sure to bring a smile to any "Niley" shippers still out there.

On March 12, Cyrus started up the hilarity by posting a video of herself on Twitter from her Grammy's appearance set to Ariana Grande's "thank u, next." In the clip, which she captioned, "That moment when even your ex knows your socials have been [fire]", she could be seen swinging her hair around without a care in the world. Basically, it served to show any of her exes that she's doing just fine (considering she recently married longtime beau Liam Hemsworth, I'd say she's more than fine).

She followed up that tweet with a photo of a recent convo with her ex, Jonas, which showed them bonding over a throwback pic. In the photo, as previously mentioned, Cyrus sent the "Jealous" singer a DM containing a throwback pic of her wearing a Jonas Brothers t-shirt during a hangout with her younger sister, Noah Cyrus. She captioned the photo to him with a simple, "Lols." Jonas was living for it all, as he replied with, "Amazing. These throwback shots have been [fire]." He's not wrong there.

Not only is it fun to see some throwback moments featuring Cyrus and Jonas, but it's so nice to see that they're still on good terms, years after their relationship dominated the headlines.

This recent interaction isn't the only indication that all is well between Jonas and Cyrus. Following their breakup, which took place in 2007, per Teen, the former couple went the mature route and recorded a song, "Before the Storm," together about the split, which they even performed live. The song detailed their relationship and was deemed one of Jonas' favorites, as he explained to MTV News in 2009. "I think it's probably one of my favorite songs because it has a great story to it. It's a duet with Miley, which is great," he said, and continued, "It's a good thing that happened and it'll be a good one to play live."

In 2015, the boy bander opened up about how the pair are on great terms in an interview with ELLE, proving, once more, that Jonas and Cyrus have managed to make a friendship between them work. He told the publication, when asked if he would do anything differently now when it comes to the pair's relationship, "We've always had respect and wished the best for each other," and continued, "I don't know that I have any regrets. It's more gratitude for having had a good friend in a time of craziness in my life and in hers."

Of course, Cyrus and Jonas have obviously moved on after their split, with Hemsworth and Priyanka Chopra, respectively. And it's clear that despite their romantic history, they'll always be able to call each other a friend.