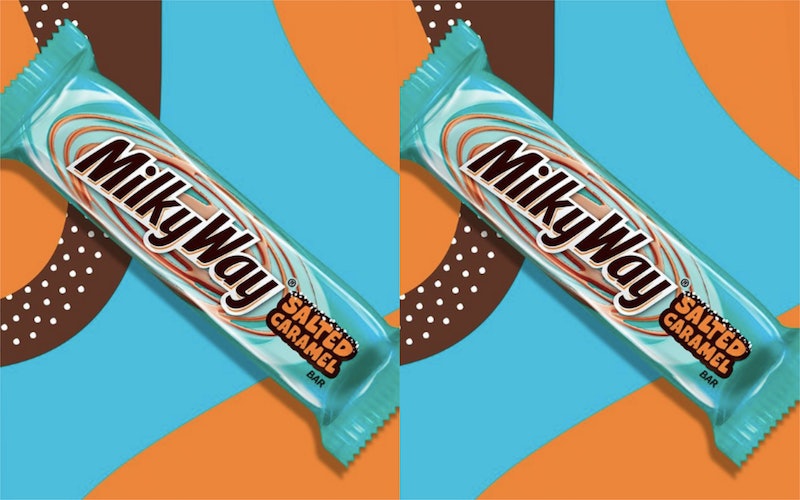 If your favorite candy hack is adding a dusting of salt to the tops of your chocolate bars, I have some excellent news for you: Salted caramel Milky Way bars are hitting shelves soon. Milky Way gave us a sneak peek of the packaging for the new candy bar via their Instagram account on Thursday — and we’ll only have to wait until October to get our hands on them. That’s when they’ll debut at Walmart for an initial roll-out; a wider roll-out at a variety of retailers nationwide will occur later on in January of 2020. All I can say is: Yes, please.

French chocolatier Henri Le Roux was the one who first conceived of the idea of salting caramel — although the method he used to do so was a little more roundabout than you might think, according to How Stuff Works. When Le Roux opened up a new chocolate shop in Brittany, France in 1977, he began making a caramel using the salted butter for which Brittany was known as one of the ingredients — the goal being to create a confection that other shops in the area didn’t have. It was an instant hit, although it didn’t hit the mainstream until around 2008. That’s when salted caramel started appearing seemingly everywhere, from Haagen-Daazs ice cream to Starbucks salted caramel hot chocolate. Today, salted caramel is a beloved favorite — a flavor profile that’s embraced at all times of year, but especially during the colder months.

As such, it makes perfect sense not only that Milky Way would debut a salted caramel variety, but that they’d do so now — right as fall is about to get into full swing. The Milky Way Salted Caramel Bar features the same milk chocolate and nougat you already know and love; this time, though, there’s also some salt alongside the caramel. It’s not totally clear right now whether the caramel itself is salted, or whether the salt arrives in the form of a sprinkling of the stuff on top of the bar (or both); ultimately, though, it might not matter. The end result is the same — and honestly, it sounds to die for. The bars will be available in the 3.16-ounce “Share Size” at Walmart starting in October of 2019; then in January 2020, it’ll hit retailers nationwide in Single (1.56-ounce) and Fun Size six-packs (3.38 ounces) in addition to the Share Size.

It turns out, by the way, that there’s a scientific reason we like salted caramel so much. A study published in the Journal of Consumer Research by researchers working out of the University of Florida examined the phenomenon of “hedonic escalation,” or “the increased liking of each additional bite of a palatable food” — and among the findings was the fact that eating sweet, salty, or fatty foods prompts our brains to release endogenous opioids. These chemicals usually kick in when we’re absorbed in “intense physical activity,” as Scientific American put it in 2012, due to their ability to block pain; however, they also activate our brains’ reward centers. That’s why they’re often cited as a possible explanation for “runner’s high.” In any event, it our brains also produce these chemicals when eat salty or sweet things… well, you can imagine what eating something that’s both salty and sweet might do to us, right?

Milky Way Salted Caramel bars will arrive at Walmart in October 2019 before a wider roll-out occurs in January 2020. You can find your nearest Walmart location here. Happy munching!