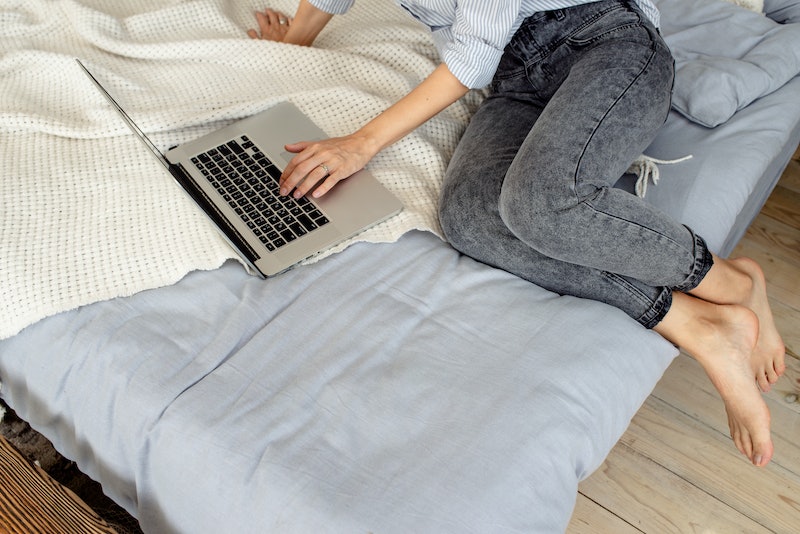 For cash-strapped millennials, sometimes it feels like the joys in life are few and far between. That's why it's no surprise that millennials will spend 13 years watching Netflix over the course of their lives, according to a survey from How to Watch, a company that reviews streaming services and devices. The survey of 750 people, 295 of whom were ages 23-38, found that the average millennial watches more than six and a half hours of streaming programs per day. That's more than 40 hours a week, the same amount of time most people spend at work. Um, guilty.

I'm not gonna lie, I've watched entire seasons of shows in one sitting, or rather while lying down with a bag of Trader Joe's cheese crunchies. And while I will take responsibility for spending weeks of my life watching Gilmore Girls, streaming services like Netflix really don't give you much time to decide if you want to keep watching. When you only have three seconds to make up your mind, it can be easier to just watch another episode.

What's more, shows that drag out a plot line or relationship tension make me feel like I've made a commitment and I have to see it through. I was a decade late to Gilmore Girls, and I watched the entire series on Netflix. I told myself that I would stop watching when Luke and Lorelai kissed. That took four seasons, which means I was committed for hours each day for months. I regret nothing because that kiss was totally worth it.

While a self-reported survey doesn't exactly yield the most scientifically sound data, it's still interesting to see how your own habits stack up to this average. And if you can relate, you're in good company. A 2018 digital media trends survey from Deloitte noted that on average millennials watch seven episodes of a series in one sitting. It's sort of like being at a bar and deciding to have one more drink over and over again. And since millennials aren't going out to bars as much as other generations, it perfectly acceptable to go ahead and watch another episode.

According to survey from Mintel, 28% of millennials prefer to stay home (and drink at home) because going out just takes too much effort. Seriously, just thinking about the logistics of going out in Los Angeles where I live is exhausting. Once I factor in the time spent driving, getting frustrated that traffic is stopped on the freeway for no reason, looking for a parking space, and paying $15 for a glass of wine, staying home to watch Absentia for the third time with my $15 bottle of wine is an easy decision.

Horrified by the amount of time you and your friends spend streaming all the shows at home in your underwear? It's not too late to get some of those 13 years back. If you're spending eight hours a day working and almost seven hours a day watching Netflix, it might seem like you're not spending a lot of time doing much else. But, you actually are.

According to The Fact Site, if you live to be 79.5 years old you will spend an average of 318 months asleep, 128 months at work, four years doing housework, over a year on the toilet, one year looking for things you've misplaced, two weeks kissing, five years waiting in lines, six years eating, and 12 years doing absolutely nothing.

For most people, that 12 years of doing nothing is likely spent watching Netflix. Perhaps some of that time could be better spent doing other things, like more kissing. Because two weeks of kissing in 80 years hardly seems like enough.