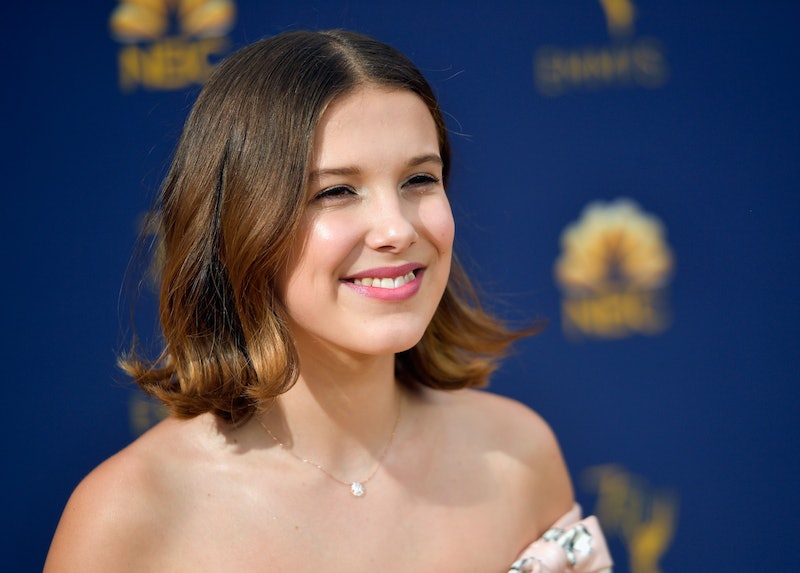 Millie Bobby Brown has been secretly wearing her new Florence by Mills beauty line for months — and it kept getting her in trouble. There was the minor mishap that occurred when she wore a lip gloss from the line to an Ariana Grande concert. ("I don't know why I just used her full name," she tells Bustle at an NYC launch event for Florence, in reference to the pair's well-documented friendship.) She recalls the reaction she got that night: "Everyone was like, 'Ooh, where'd you get that lipstick?!' And I was like “Oops! Can’t really talk about it!'" Brown says. And then there was the more stressful moment when she was trying to bring some Florence through the airport well before the launch, and was stopped by TSA for having too much product. "I was like, 'I legally can’t leave this here, so we’re gonna have to bring it in,'" Brown remembers, laughing at the fact that she basically inadvertently gave airport staff early access to the line. "I finally was like, 'You know what? Just take the moisturizer, but don’t wear it until this date. And if you do, wear it in the morning and night.'"

It's these moments of stressful-at-the-time-but-now-are-just-funny-stories that highlight the fresh take Brown has on the beauty industry. In a post-Euphoria makeup world Brown's beauty line — which, in the star's words, "adds to your beauty, doesn't cover it up" — is closer to what society might have traditionally expected from a 15-year-old founder. In fact, if you're looking for the perfect specimen of a Gen Z human, Brown is a top contender. She's a star on social media, is outspoken about mental health, and vocally passionate about various charitable causes.

Swimming Under The Eyes Gel Pads
Florence By Mills

With everything from sheer foundation to cream blush to cooling under-eye patches shaped like whales (an animal Brown loves), the collection was clearly created with the Stranger Things actor's peers in mind. The blushes are even named after her best friends which, Brown says, makes it harder for her to pick a shade to wear. "When you pick a blush, you feel like you’re picking a best friend, so I’m like, 'Ooh, ahh! I feel like I’m cheating!'" she explains with a grin. (By the way, it really was only the TSA that got early access to the products: "My best friends didn’t even know that I’d named [the blushes] after them!" Brown says, explaining that she kept the line secret from everyone except her family. "They're my friends, not my business partners.")

Another aspect of the line that makes it feel so apropos to Brown's generation is the activism behind it all — something surveys have found Gen Z as a whole considers incredibly important to their identities. In fact, while Brown is excited to talk about her new products, she also dedicates a good portion of this interview to chatting about ways to raise awareness about the struggles people her age face. "Young people are growing up in an age full of social media, judgement, and cyber bullying," she explains. "When we want to speak about things, we feel as though we’re 'too young' to." This, of course, is changing as people like Emma González, Greta Thunberg, and other Gen Z activists are claiming space in political debates. "What we need to do now is get world leaders’ attentions, and start getting a seat at the table," Brown says, when asked what she's most proud of Gen Z for. "So many young people right now are in houses of parliament, at the UN. I’m so proud of those people that have the courage, have the bravery to walk in and stand in front of men and women, older people, and speak their words."

For Florence by Mills, activism also comes in a monetary form: A donation will be made in the brand's name to the Olivia Hope Foundation, which was founded in memory of one of Brown's best friends after she passed away from leukemia. "[Olivia] was one of the strongest people I knew, and her family is so strong and such a tight unit. They’re my closest family friends," Brown says. "I wanted to support the foundation with Florence by raising awareness and donations."

While makeup will arguably never solve the world's biggest social injustices, Brown did want to make it a line that could provide some escape for her fans. Even the color of the packages (lavender) and scent of the products (a cucumber, rose, and lavender blend) ties in to trying to soothe the anxieties teens can feel on a regular basis. "I always wanted lavender to be the theme," Brown says. "Especially with this industry, it can be very difficult to kind of remain calm, but lavender oil is always in my purse to calm me down. I’ve always believed that lavender has always been, like, my secret best friend."

One stress Brown can't help with? Waiting to see if a certain Hawkins police chief somehow survived a devastating blast at the end of Stranger Things season 3. When asked if Hopper is really dead, Brown just shrugs and says, flatly, "I have no idea. Do you know? No one's told me anything." Ah, well. For now, we'll just have to be satisfied with her beauty secrets.

More like this
The "Cloud Skin" Trend Is An Updated Way To Wear Matte Makeup
By Jordan Murray
This Week’s New Makeup Releases & More Beauty Headlines
By Audrey Noble
The 12 Best November 2022 Beauty Launches, According To Our Editors
By Rachel Lapidos
A Week In The Life Of Celebrity Makeup Artist Vincent Oquendo
By Jordan Murray
Get Even More From Bustle — Sign Up For The Newsletter