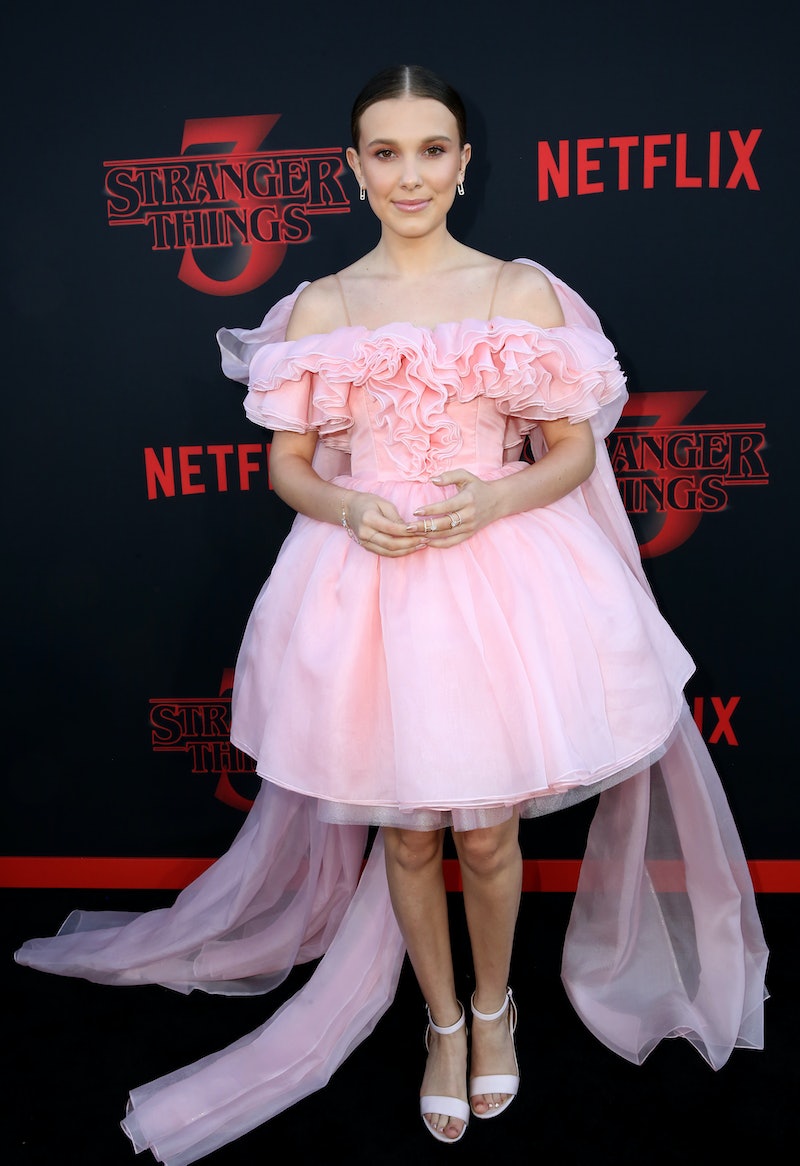 Spoilers ahead for Stranger Things Season 3. Forget the Bottle Cap Challenge, because Millie Bobby Brown's #NeverEndingChallenge is now taking center stage. On Wednesday, the Stranger Things star shared a new Instagram challenge that fans of the Netflix series will want to participate in immediately. Yes, it's that good.

For those who've seen the third season of Stranger Things, Brown's challenge is obviously in honor of Dustin and Suzie's duet they sang in the finale. The adorable couple belted out the "NeverEnding Story" song from the 1984 film of the same name. Now, Brown took it upon herself to start the #NeverEndingChallenge.

The 15-year-old actor who plays Eleven in the sometimes frightening drama uploaded two videos of herself singing and dancing to Gaten Matarazzo (Dustin) and Gabriella Pizzolo's (Suzie) version of the track originally performed by Limahl. She captioned her Instagram,

"I nominate YOU to do the #NeverEndingChallenge"

Brown posted further challenge directions in her Instagram Story about what fans need to do for her to share their #NeverEndingChallenge on her feed. She explained,

"reposting whoever does this challenge with the same moves!!! let's see ;)"

If you check out the #NeverEndingChallenge tag on Instagram, you'll see how many people are following in Brown's footsteps. She certainly started a trend. Also, what a fun tribute to Dusty-bun and Suzie-poo and another way to put "NeverEnding Story" back on the map. Even Limahl is thrilled over the song's recent popularity. (If you want to listen to the Stranger Things version, it's available on Spotify.)

He recently told Entertainment Weekly, "My God! It’s been very exciting to hear about all the new interest in the song. Thirty-five years later, it’s reaching a whole new audience — it’s fantastic." Limahl added about Dustin and Suzie's big moment,

"I have seen the clip when the two characters perform the song and I was very touched. I didn’t know the show was so big, obviously I’m going to watch it now. This song seems to have gotten everybody really excited. I’m so happy that 35 years later, I’m still around to be able to enjoy this."

Really, who didn't enjoy the duet? Dustin and Suzie's performance certainly came at the most inopportune time, but it still made for an unforgettable scene. The song happened when Hopper and Joyce needed a code to get keys that would defeat the Mind Flayer. Dustin reached out to Suzie for the code, because he knew she would know it. Well, Suzie would only give Dustin the numbers if he sang the couple's song with her.

Hopper, Joyce, and everyone else were not only confused by the duet, but also irritated. Who can blame them? They were in the middle of a life and death situation. That said, the unexpected performance is now one of the most memorable and hilarious moments from the series. It was so good that even Brown felt the need to start her own #NeverEndingChallenge on Instagram, which even helps fans to channel their inner Dustin and Suzie.