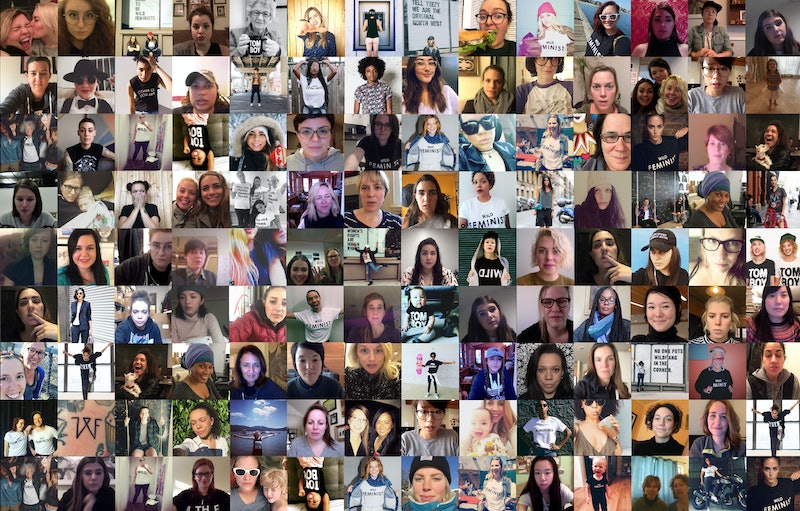 On Jan. 21, thousands of people will be marching in Washington, D.C. to protest Trump's inauguration. But the ability to pick up and leave for a march isn't a privilege everyone has — so, for those who can't make it, 10 people created Million Women's Voices, a site for women to share what's on their minds as Trump enters the White House.

"The idea was dead simple: Ensure that every woman had a voice on Jan. 21," the site reads about its genesis. "Even if you couldn’t get the time off from work, or you couldn’t afford the flight, or you couldn’t leave your kids or your cat Ziggy behind for a weekend, this site would allow you to raise your voice."

So far, the website, designed by Ziba and built by Uncorked, features 68 candid videos with titles beginning, "This is the voice of a woman who..." The participants have completed the sentence with everything from "won't do what she's told" to "is watching a tsunami come in."

One woman who "is not intimidated by men" describes being a woman in the male-dominated photography industry. "Let's count every victory," she says, talking about the importance of women supporting one another to ensure "nobody feels defeated or intimidated." A woman who "has a wild heart" just spins around in a witch costume.

Another who "listens to her 10-year-old self" recalls a promise she made to herself to "always be on the right side of history" and how the election has made her more determined to fulfill it.

"The idea hit me after talking to some consumers who didn't feel engaged in the march in DC because they couldn't afford flights or hotel," Wildfang CEO Emma McIlroy, one of the creators, tells Bustle over email. "We decided to create a place where, no matter how much money you had or the color of your skin, you could share your thoughts and feelings as we approach this historic moment in time. ... We want it to become a record of how the nation felt, how women from all backgrounds felt when we elected a racist, sexist, xenophobic, bigoted president."

You can tell your own story on the Million Women's Voices website, and when you share it on social media, the people behind the site will tag the White House so that politicians have a chance to hear your opinions. And just as importantly, other everyday people will hear you and feel like part of something larger.

More like this
Charlene White & MPs Lead Tributes For Bristol Bus Boycott Organiser Roy Hackett
By Sam Ramsden
Your Daily Horoscope For August 12, 2022
By Mecca Woods
25 Things I've Reduced My Life To, In Addition To WFH In My PJs
By Ginny Hogan
The Spiritual Meaning Of The August 2022 New Moon
By Nina Kahn
Get Even More From Bustle — Sign Up For The Newsletter