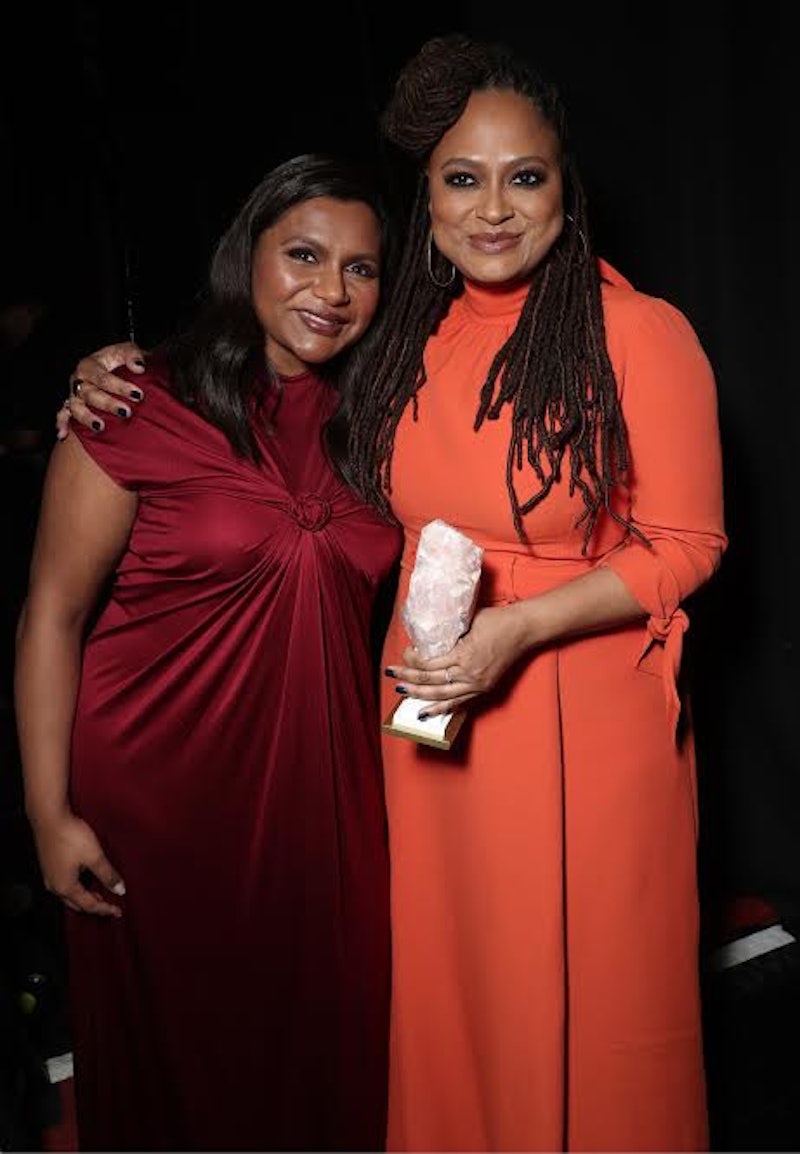 After working together on 2018's A Wrinkle In Time, Mindy Kaling and Ava DuVernay formed a friendship and admiration for one another that continues to grow. In a sneak peek of the 2019 VH1 Trailblazer Honors, airing on March 8, you can see Kaling — who starred as Mrs. Who in the sci-fi fantasy directed by DuVernay — present the filmmaker with an award at the ceremony. While addressing the audience, the comedian playfully points out DuVernay's acumen in fashion and social media, before highlighting the director's important work in the areas of entertainment and activism.

During the brief clip, Kaling jokes:

"Let's talk about what's really important: her fashion and her Twitter account. Her fashion is so on point that sometimes I forget that she's a director and I'm like, 'what's with Oprah's hot friend?'"

Following Kaling's introduction, DuVernay reportedly took the stage to reveal that she was in her 30s the first time she "picked up a camera," as reported by Variety (the Honors were filmed in February). Pointing out the source of her motivation to defy the odds, the 46-year-old filmmaker cited her mother as a driving force. According to Variety, she shared,

"I’m black, I’m a woman, I never went to film school. Where did the audacity come from to say: ‘I can do this I can make films. This dream is mine. It's meant for me.'"

DuVernay, addressing her mother in the audience, went on to say that she was taught to be "fearless" and explained, "All I knew was that I wanted to make films about women like [my mother].”

Despite getting off to what some may perceive as a late start in filmmaking, DuVernay has made a huge name for herself over the past decade. Her impressive résumé includes the films Selma, 13TH, and A Wrinkle In Time. The success of 2018's Wrinkle made her the highest-grossing black female director in domestic box office history.

It makes so much sense that she was honored at the annual VH1 Trailblazer Honors, which is slated to air this year on International Women’s Day. The Honors are touted as a celebration of "today’s most respected politicians, entertainers, artists, activists, allies and icons who have dedicated their time and steadfast commitments to the women’s movement and beyond,” by VH1, according to Rolling Stone. In addition to its acknowledgment of DuVernay, the show also paid tribute to #MeToo founder Tarana Burke and The Handmaid’s Tale author Margaret Atwood. Actor Samira Wiley, who stars on the Hulu series, accepted the honor on behalf of Atwood, who could not attend for undisclosed reasons, according to The Hollywood Reporter. House Speaker Nancy Pelosi was additionally awarded for her outstanding effort in the movement for women's equality and civil rights.

The ceremony, which will air as a one-hour special on Friday, March 8 at 9 pm ET on both VH1 and Logo, was an all-out celebration of excellence in entertainment and social activism. Cher was notably on hand to present to Pelosi, while actor and activist Alyssa Milano stepped up to introduce Burke to the stage. Singer Rita Ora also entertained fans with a performance of her empowerment anthem, “Soul Survivor.”

All-in-all, it seems that all of the women involved have a great deal of admiration for one another, and watching Kaling gush about DuVernay should be enough to put a smile on anyone's face.