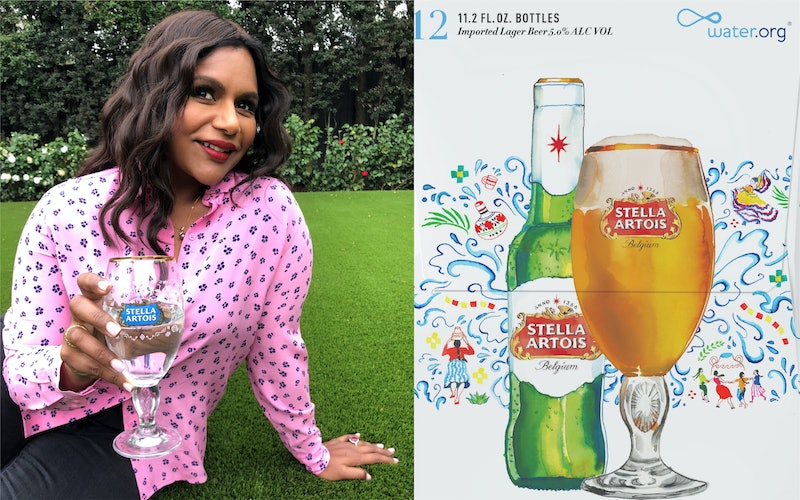 Even if you saw the now-iconic 2019 Super Bowl ad where Sarah Jessica Parker rejected Carrie Bradshaw's signature cosmo for a Stella Artois, you might not know that Stella Artois' "Pour It Forward" challenge, in partnership with Water.org, is continuing to shed light on the global water crisis. The brand revealed more celebrities would be joining the movement to help provide access to clean water around the world, and in honor of World Water Day on March 22, it announced that actor Mindy Kaling is joining the "Pour It Forward" movement with Stella Artois and Water.org.

Kaling has been a champion of many charitable causes over the years, and this one, she shares with Bustle over the phone, is especially close to her heart — particularly because of who it affects most. "Because the global water crisis affects ... women and children so much, this was really an important thing for me to be a part of," Kaling tells Bustle.

According to a report published by the World Health Organization and UNICEF Joint Monitoring Programme in 2017, 844 million people were living without access to clean drinking water in 2015; an ongoing issue that, as Kaling pointed out, puts a disproportionate burden on women and children. Per that same report, in eight out of 10 households where water is collected off-premises, women and girls are responsible for collecting it — a task that can take up to six hours in some areas, compromising educational opportunities and safety of those impacted.

Water.org, an organization committed to providing access to clean water worldwide, partnered with Stella Artois back in 2015 to help bring light to the issue and give people a way to get involved — and with the "Pour It Forward" campaign, one of those ways is as simple as buying yourself a drink.

"Particularly with this campaign, it's so easy, because if you have a social media account, just using the hashtag #PourItForward will help Water.org provide a year of access to clean water to different people," Kaling tells Bustle.

While the hashtag part of the campaign will be active through March 22, Kaling also shares other ways people can get involved. Stella Artois announced that through March 31, every pour or bottle of Stella Artois sold in the U.S. will provide someone in the developing world with access to a month of clean water; for every six-pack sold, six months of access; and for every twelve-pack sold, twelve months of access. Stella Artois also launched three designs of limited edition chalices, and for each chalice sold, the proceeds will give someone five years of access to clean water.

"If I'm going to happy hour it's just as easy for me to ask for a Stella than for anything else, so I loved this, because I found it was a way to to do good without having to put an inordinate amount of effort into it," Kaling tell Bustle. "So I just want to spread the word."

While anyone is welcome to step up to the plate, Bustle asked Kaling who she would like to see Pour It Forward, whether a real person or a fictional one, and it may have hatched a bonus episode of The Office — at least, one we can all enjoy in our imaginations.

"You know, it would be really fun to see Michael Scott and Dwight Schrute 'Pour It Forward' and try to get people at the office to try to 'Pour it Forward' — I'd like to see them trying to explain all that to the rest of the cast of The Office. I think that would be enjoyable," Kaling tells Bustle. "Michael Scott explaining the water crisis of the world to people would be ... I bet he would get so much of it wrong, but that would be very cute. Sorry. Now I want to write that episode of The Office."

While this year's World Water Day continues to shed light on the global water crisis, it's important to note that there are ways you can help year-round, both by educating yourself about the global water crisis and donating to help the efforts to solve it. You can learn more about Water.org's mission on its website here, and in the meantime, "Pour It Forward" until March 31.