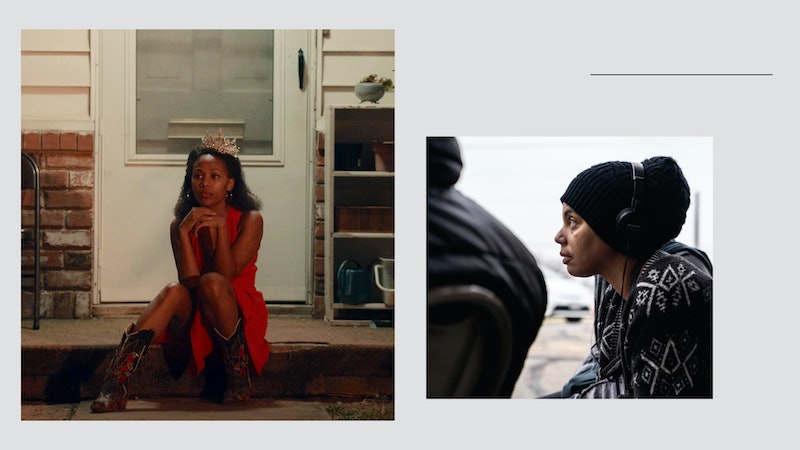 Director Channing Godfrey Peoples' feature film debut, Miss Juneteenth, follows Turquoise Jones, a struggling single mother and former Miss Juneteenth beauty queen. Though Turquoise's life didn't turn out quite the way she thought it would after her victory, she's determined to right her wrongs by helping her daughter get crowned Miss Juneteenth and secure a scholarship to a historically black college.

Godfrey Peoples' film is being released on VOD on the 155th anniversary of Juneteenth, an annual holiday commemorating the end of slavery in the United States that's been celebrated by African Americans since the 1800s. But as the country protests to put an end to the police brutality practices that killed George Floyd and Breonna Taylor, there's been a renewed interest in the holiday. Here, Godfrey Peoples reflects on the bittersweet joy of Juneteenth — and the power of releasing her film in this political moment, as told to Bustle's Culture Editor Samantha Leach.

Juneteenth was something that I looked forward to every year. The parades, the blues music, the dancing, and the community coming together. But I definitely looked forward to the Miss Juneteenth pageant most of all. Miss Juneteenth is a scholastic beauty pageant for young African American women. And as a young black woman growing up in Texas, it gave me a sense of confidence to see young Black women on stage that looked like me in all their beauty, dignity, and grace. I saw hope on their faces, hope and excitement for the future. For a young Black girl, especially in America, that was just completely rich and affirmational.

Then as an adult, I kept wondering, What happened to those women who won Miss Juneteenth? I wrote and shot Miss Juneteenth in the community that I grew up in, the Southside of Fort Worth, Texas. Fort Worth is a huge city, but on the Southside, everybody knows each other. So I knew what a lot of those women had gone on to do just because of the closeness of the community. But I always wondered, what happened to the ones that we didn't know?

That's where the idea of Turquoise came into being. I really wanted to tell a story of a Black woman who had this dream deferred, but ultimately knows that she wants something. She might not be able to articulate completely what that "something" is, but she knows she wants something for herself and her child. And in a way, that's radical.

It's an interesting time for the film to be going out in to the world. This is the 155th anniversary of Juneteenth — and it's interesting to see people actually opening the door to embrace the holiday. I hope that people will use this time as a time of reflection. Because Juneteenth is a time to acknowledge our ancestors who were enslaved and whose freedom was kept hidden from them for two and a half years, intentionally. So for us in the Black community, we acknowledge it with a certain reverence.

Because African Americans in this country are still grappling with this idea of what truly is freedom. Black people are not given the freedom to breathe, the freedom to walk down the street, the freedom to be in their own homes. It wasn't long after we shot the film that there was a young woman in my hometown that was killed by the police, Atatiana Jefferson. We just keep seeing these things happen over and over again.

So it's a bittersweet time to release the film. I'm happy to see Black stories being amplified in this moment, but it's unfortunate that we have had to endure these tragedies in order for our voices to be amplified. But as a storyteller, an artist, and especially as a human being, it's my mission to bring stories about the humanity of Black people to screen. Miss Juneteenth is just the beginning.

You can now stream Miss Juneteenth on VOD and Digital.