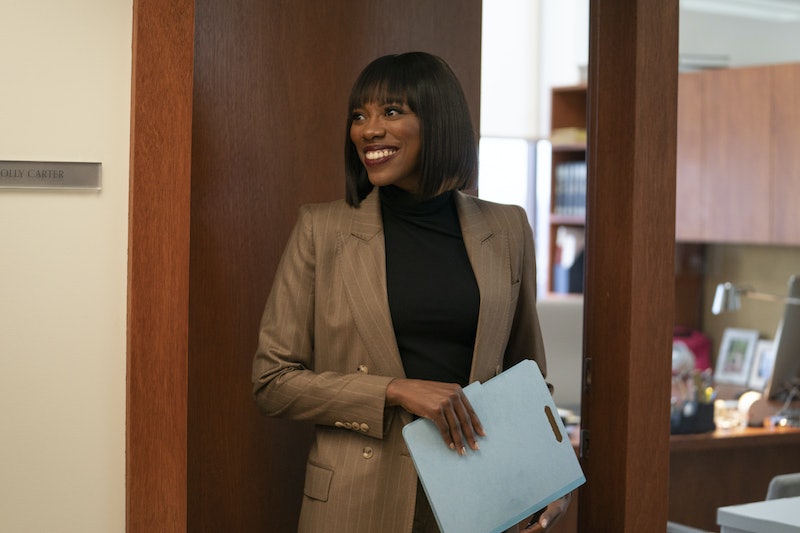 After a few weeks of funemployment on Insecure, Molly is finally starting her new job — as Issa makes important, if not necessarily forward, steps in her own career. Both of them are feeling a little uncertain, if for different reasons. While Issa is faced with her lack of passion, Molly's new firm on Insecure is more of an adjustment than she expected.

Did anyone else think that those papers were stored in Molly's office because she was being hazed? The all-black firm where Molly is hoping to feel more valued than the mostly white firm where she was previously does not have the amenities that she's used to — and Molly isn't really used to faltering in her professional life. This feels like a demotion to her, even though she was looking forward to working in what she thought would be a more empowering environment. After trying, and failing, to break into the all-white male club at her old firm, a change was due. But this just isn't doing it for her.

While out with the girls, Molly and the others debate the pressures they put on all-black organizations to be better and whether or not that is fair. Later, when she tries to play up the firm's blackness at work and make a joke during a meeting, it comes off awkward at best, and passive aggressive at worst.

Why did Molly quit her old job in the first place? It was a big move for someone with such a Type A personality. For one thing, after trying to infiltrate their inner circle, she found out that her white male coworkers were making considerably more money than her — and remember, when we talk about the wage gap it's usually what white women make that's listed as a statistic, and the gap for women of color is even larger.

Plus, in the Season 2 finale, Molly was interviewing around and then given a "Rising Star Award" by her old firm, a belittling attempt to get her to stay and highlight their own minimal diversity, without even offering her the partnership or a salary bump. The value that she was looking for there is not genuine at all.

She needed a better fit, and hopefully with time Molly will settle in to this new firm. They might do things differently, and the role race has in that is interesting to see her navigate.

Work is a major theme this season. Issa takes the property management job. With the low price of rent she'll have in that area, it's easy to see why that potentially thankless and unfulfilling position is tempting. She'll be able to clear her head while thinking about what she wants to do next. Just because living with Daniel has gotten less awkward, if not actually kind of nice, does not mean that she should put herself first.

That said, Daniel still calls her out. Issa doesn't love what she does. She's not working towards any kind of dream. She's stuck. Issa's not passionate about We Got Y'all, not anymore, and she's certainly not passionate about apartment managing. She could be passionate about that music outreach program. It has a diverse staff and seems to be effecting actual change. She could be the advocate that she wants to be. Do it, Issa! Do it! (Also, while they definitely shouldn't be dating and roommates and coworkers, don't you also kind of think that Daniel might be a good fit for that program too, with his orchestral obsession in his own music right now?)

As always, Molly and Issa are living parallel lives with issues that complement each other nicely. Though they want different things, neither's career is what they expected it to be right now. The self-discovery and growth journey that is Insecure Season 3 is only getting started.

More like this
Lisa Kudrow Explained How Her Body Image Changed While Filming 'Friends'
By Grace Wehniainen
It’s Official: 'The Bachelorette' Is No Longer A Fairy Tale
By Samantha Allen
What’s New On Netflix: 'Never Have I Ever' & 'Indian Matchmaking' Return
By Arya Roshanian
Everything To Know About The HBO Max & Discovery+ Streaming Service Merger
By Brad Witter
Get Even More From Bustle — Sign Up For The Newsletter